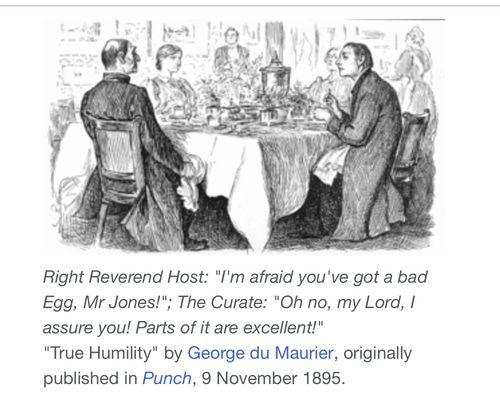 Trump's SOTU Speech A Curate’s Egg—Parts Of It Were Excellent. But That's Not Enough

The “Curate’s Egg” is a 19th century English joke (the cartoon above dates from 1895) for something that's bad in part--but of course that part is sort of important.

There was some good stuff in Trump's SOTU tonight, about the need for a Wall and highlighting illegal alien crime. But no decisive move.

Trump did say “I want people to come into our country in the largest numbers ever, but they have to come legally” (emphasis added). But that was reportedly an ad lib, typical of Trump's careless blowhard style, which might or might not mean something. He certainly hasn't announced a George Bush-style "Read My Lips" capitulation.

Washington Watcher said back on January 25 that Trump had three weeks to save his presidency. This SOTU hasn't done it. But he's still in the game. Stay tuned.