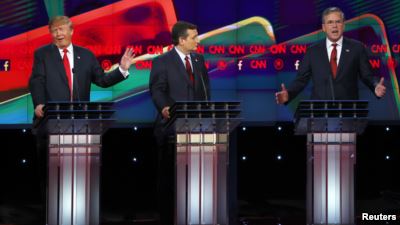 Trump the Unstumpable Has Best Night Yet, But So Does Cruz as Rubio Wounded on Amnesty

The Republican Establishment must be on the brink of a nervous breakdown. Donald Trump appeared positively presidential tonight, speaking in a more solemn and grave tone then we are used to and not giving an inch to anyone. Incredibly, Jeb Bush took repeated shots at Trump and the Donald blew him out of the water without breaking a sweat. When Jeb said, "You can't insult your way to the presidency" not once but twice, Trump acidly replied, "I'm at 42%, you're at 3%." He then mocked how Jeb has gone from center stage to the margins, laughing, "Pretty soon you're going to be off the stage." One almost feels sorry for poor Jeb.

The crowd was very anti-Trump but he didn't even back down to them and he managed to bring them around. Interestingly, Trump won a great deal of applause when he said that "walls work - just ask the Israelis."

The biggest story of the night for Trump was his pledge not to leave the GOP at the tail end of the debate. He managed to sound magnanimous. He won a great deal of applause for this statement from a once hostile crowd. It was like the end of Rocky IV.

It signifies two things. First, Trump is acting like a front runner and trying to unite the party around him. Second, Trump is disarming his critics by forcing them to associate with him as Republicans. Even Lindsey Graham, who spent most of the undercard debate taking shots at Trump, had to say he would support him if he was the nominee. What Trump is saying to the GOP is akin to Rorschach in Watchmen. "None of you seem to understand. I'm not locked in here with you, YOU'RE LOCKED IN HERE WITH ME."

The other big story was Ted Cruz who was so smooth and polished it sometimes came off as annoying, but navigated the parries and thrusts as skillfully as an Olympic fencer. The moderators tried to bait Cruz and Trump into attacking each other, but they didn't go for it. We can expect Trump will continue to poke at Cruz on the campaign trail, but for this debate, the old alliance held strong. As the Official Conservative Movement, including the likes of the Family Research Council and talk show hosts like Rush Limbaugh and Mark Levin are now coming out for Cruz, Cruz thinks he can unite the conservative movement. Trump is counting on his own supporters to stay loyal and pick up moderates and first time voters as he continues to troll the media. Neither one wants to go to all out war just yet.

But Cruz (along with Rand Paul) unloaded on Marco Rubio, who was finally, finally asked about amnesty. Cruz effortlessly disarmed Rubio's attempts to tie him as a supporter of amnesty and painted Rubio as a pawn of Chuck Schumer. This is the first time someone has landed a real punch on Rubio in any debate.

However, Cruz's record is not perfect. One small concession, sadly missed by many, is that Cruz had to nod when Rubio charged Cruz wanted to triple the number of H1-B visas. This is a very bad sign Cruz is still beholden to some of his donors and is an ideological captive of the "legal immigration good, illegal immigration bad trap."

The debate was mostly focused on foreign policy. Candidates such as Fiorina, Christie, and Kaisich sounded positively unhinged in urging war and confrontation with the likes of Syria's Assad and Russia. Interestingly, Trump and Paul were the voices of restraint. Trump was slammed for advocating punishing the families of terrorists earlier in the evening, but as the debate wore on, it was clear Trump is actually the one who doesn't want to kill a bunch of Muslims. Trump even bemoaned the cost to "humanity" of the Iraq War, which, he boasted, he had always opposed.

A good night for Trump, who shut up anyone who still thinks he might not be ready for this. A good night for Cruz, who is positioned right where he needs to be, even though immigration patriots still should have plenty of doubts about where he really stands. And a good night for Paul, who finally got a chance to distinguish himself from the field. He's even sounding like an immigration hawk, though it is too little, too late.

Poor Jeb Bush is done. Fiorina and Christie are unhinged and will get us all killed. And for the first time, Rubio was not able to shake off the truth that for all his talk of bold Republican leadership, he was simply a stooge of Chuck Schumer and Barack Obama when it came to immigration.