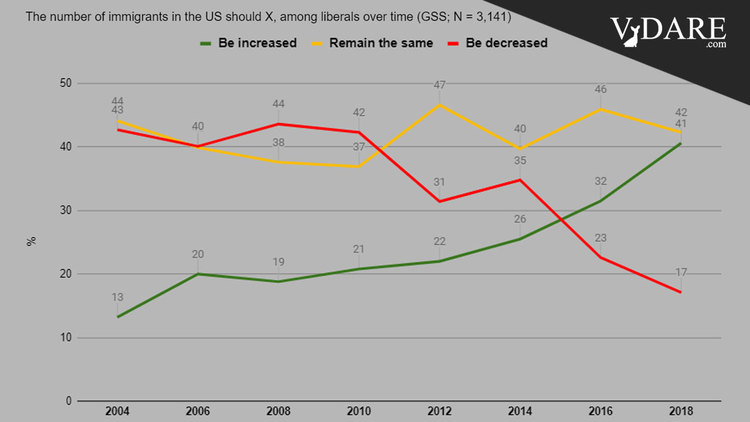 Views On Immigration By Political Orientation Over Time

Immigration restrictionism has lost its populist appeal. It is increasingly becoming a distinctly partisan issue. The following graphs track sentiments over time by political orientation: It’s hard to fathom that less than twenty years ago, liberals were more than three times as likely to say immigration to the US should be decreased as they were to say that it should be increased. Now they are over twice as likely to say the opposite. The past, even the recent past, is a foreign (heh) country.

Bernie Sanders famously referred to open borders as a “Koch brothers’ proposal” in 2015. That coincided with the inflection point of the American left’s view of immigration, when the Democrat party substantially completed its transition from positioning itself as the party of the American working class to the party of the globally aspirational. When Vox’s Ezra Klein pushed back against Sanders’ response, the Vermont senator noted that Klein’s position meant the end of the nation state. The self-avowed socialist did not view that as a desirable outcome:

Nothing proactive was done to reduce immigration when public support for reducing it was strong, but that support did stop successive congressional attempts at amnesty in their tracks. We’re rapidly approaching the point where this will cease to be the case. The granting of legal residency to the tens of millions of foreigners present in the US is coming, if not prior to the 2022 mid-terms then almost certainly before the 2024 presidential election.