Why Keep The Illegal-Alien Criminals Here? To Beat Us Into Accepting Our Replacement

More data from Immigration and Customs Enforcement show that the Biden Regime is purposely refusing to deport illegal-alien criminals, which means it is purposely leaving them in the country. In March, using initial data published in the Washington Times, I speculated that Biden and Homeland Security Secretary Alejandro Mayorkas had a purpose: to use the illegal-alien thugs as a street army to terrorize the Historic American Nation into accepting its dispossession and replacement. Biden and his communist gang will beat us into submission.

The Times reported that deportation of criminal aliens crashed by 63 percent. But now, Jessica Vaughan of the Center for Immigration has teased the data from ICE to show just what Let’s Go Brandon has done—or not done [ICE Records Confirm Steep Decline in Deportations, May 17, 2022].

And parsing the numbers between border and interior enforcement reveals a much darker picture of what Biden and Mayorkas, a Cuban-Jewish immigrant and unindicted visa fixer, have done.

Some have suggested that the decline in ICE removals is due to the use of Title 42 authority at the border, in which illegal border-crossers are expelled instead of removed, as is the practice in typical years. Yet … removals of aliens, criminal aliens, and aggravated felons in the interior have also declined dramatically. … 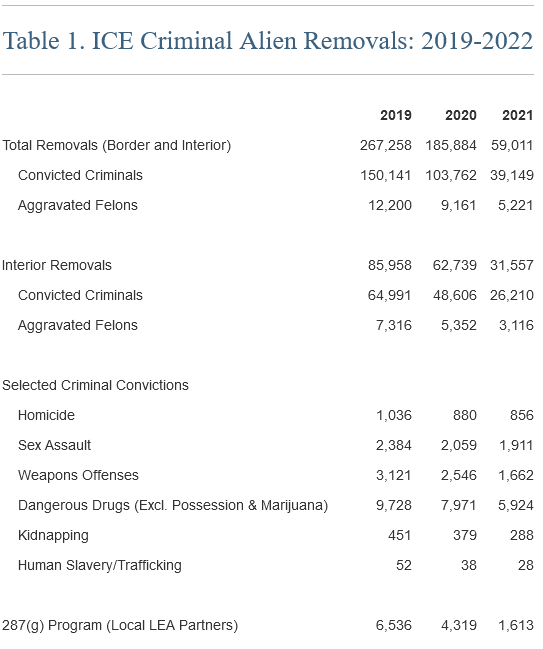 Recall what Mayorkas has repeatedly said. Mere unlawful presence in the U.S. is no longer grounds for deportation. DHS and its ICE and border subsidiaries will focus on removing criminals.

No one objects to targeting dangerous aliens. Assuming a choice must be made (which I don’t), an illegal-alien, MS-13 gang member must be removed before an illegal-alien grandmother who drops her widow’s mite in the collection box at Mass on Sundays. Thus, ICE should have had even more resources to remove illegal-alien rapists, murderers, and drug dealers.

Yet removals tanked. Interior removals dropped almost 50 percent. Vaughn’s data show that neither Biden nor Mayorkas had any intention of moving against illegal-alien criminals.

It’s bad enough that Biden has simply stopped enforcing the law against “non-criminal” illegals. But he is very clearly refusing to enforce it against dangerous criminal illegals.

That leads to my conclusion published in March: Illegal-alien criminals are a weapon in The Great Replacement.