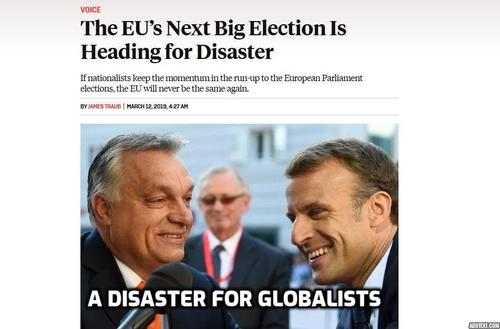 VDARE Radio: Can The European Union Be Taken Over By Nationalists?

Radio VDARE: Can The European Union Be Taken Over? By Radio VDARE

The European Union will hold elections on May 23 and the future of the bloc will be shaped by the outcome.  [European Parliament elections—battle for ‘Europe’s soul?’ by Miriam Sorace, Social Europe, February 19, 2019] It is a showdown between Hungarian president Viktor Orbán and French president Emmanuel Macron. Macron is calling for a vastly extended EU bureaucracy and has published a call to oppose nationalism. His appeal was published in 22 European countries.  [Macron is getting ahead of himself on Europe, by Leonid Bershidsky, Bloomberg, March 5, 2019]

Yet Macron faces opposition at home. A member of the National Rally party in France mocked him as simply a “scarecrow” rather than the “leader of Europe”.  [Emmanuel Macron mocked by far-right rivial—‘He’s no leader, he’s a bogeyman!’ by Romina McGuinness, Express, March 5, 2019] The “yellow vest” movement is not really being covered by American media, but it continues to rage on the streets of Paris, and if anything, is growing more militant. [Yellow vest ‘ultimatum’ rally turns violent in Paris, by Marie Giffard, AFD, March 16, 2019]

Meanwhile most commentators believe the so-called centrists are going to lose their majority in the next round of elections. An article in The Guardian declares, “Polls suggest the two big groups [the center-right European People’s Party and the center-left Socialists & Democrats] will only win 45% of seats.” [EU Parliament’s centrist coalition set to lose majority, poll finds, by Jennifer Rankin, The Guardian, February 18, 2019].

One complicating factor is that the European People’s Party is facing pressure to expel Viktor Orbán’s nationalist party, because the party is directly attacking European Commission president Jean-Claude Juncker. A recent Hungarian ad campaign labeled Juncker an ally of George Soros and someone who wants to force mass immigration on Eastern Europe. [Tweets of the week: Election poll, copyright mob, and Fidesz in trouble, by Evan Lamos and Jennifer Baker, Euractiv, February 22, 2019] This is true but Orbán has already apologized for the campaign. Why? For whatever reason, he wants his party to remain a part of the European People’s Party center-right coalition. [Hungary’s Orban told: Win back trust to stay in EU center-right bloc, Reuters, March 15, 2019]

The European People’s Party, and more broadly, the center-right, needs Orbán in order to have a big group of seats in the EU. But at the same time, Orbán can’t be permitted by the European establishment to directly challenge the pro-immigration and anti-sovereignty direction of the EU. [EU Struggles to rein in Hungary’s hard-line government, by Joanna Kakissis, NPR, March 16, 2019] Making things even more interesting, an Italian party, the Fratelli d’Italia, is joining a bloc called the Alliance of Conservatives and Reformists in Europe, which is preparing a home for Orbán if he is forced out of the EPP. The stated goal of this party grouping, in the words of one politician, is to unite all of Europe’s conservatives and force Macron to the margins. [Italy’s far-right hopes to form new broad Conservative alliance in Europe, by Gerardo Fortuna, Euractiv, February 25, 2019]

Not enough chaos? Get ready for this—because of the failure of Parliament to figure out how Brexit is going to work, the British may be forced to participate in the EU elections. [UK must take part in EU elections if Brexit delayed—Austrian negotiator, by Brenna Hughes Neghaiwi, March 16, 2019] Who knows what kinds of parties will win seats in that event.

The battle between Orbán and Macron, between nationalists and the post-nationalists of Brussels, is usually seen as a battle between those who want independence from the EU and those who want to consolidate the alliance. The press is clearly cheerleading for more consolidation. As Foreign Policy puts it, “[I]t’s incontestable that Europe cannot deal with problems like immigration and the flow of refugees, the threat from Russia, cybersecurity, and privacy, unless it can act collectively. [The EU’s next big election is heading for disaster, by James Traub, March 12, 2019]

Yet like the National Rally said of Macron himself, this argument is a straw man. The issue is not whether Europe needs unity. The issue is unity for what. A common border policy would make sense for Europe, especially because of the utterly unsustainable African population boom and the continuing instability in Syria. Yet instead of functioning as a civilizational defense pact, the European Union serves as a kind of civilizational suicide pact that prevents individual European countries from protecting their own borders. The EU threatens to dump refugees on recalcitrant nations, an implicit admission that these Third World migrants are a burden, not a “strength.”

Or take the so-called “Russian threat.” Considering the scale of Islamic terrorism in Europe over the last decade and the wholesale transformation of entire cities, the real national security threat to Europe is demographic change, not Russia. Yet for some reason, the European Union wants to rope all these different nations into confronting Russia. Why?

The problem is not the European Union, the problem is that it is an anti-European Union. The problem is that the continental bloc forces countries into adopting insane and self-defeating immigration policies. What is needed is a radical reform of the EU’s immigration policies in order to make the idea of European integration sustainable. If that doesn’t happen, escape from Brussels becomes the only alternative—and considering how hard even Brexit has been to implement, that may be all but impossible.

Let’s hope the good guys win in May.