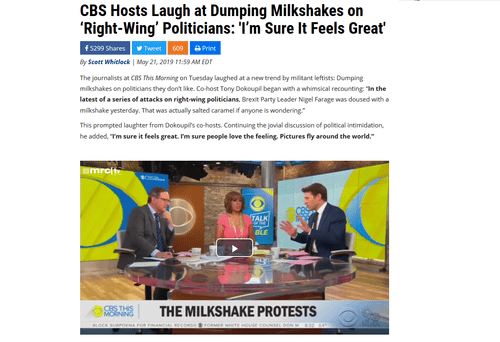 Well, in the United Kingdom, the British people passed a referendum to leave the European Union three years ago. For some reason, the government of supposed Conservative Theresa May didn’t deliver, and now she is resigning [Theresa May set to go after Andrea Leadsom quits over Brexit fiasco and Cabinet try to force her from power, by Tom Newton Dunn, Steve Hawkes, Matt Dathan, Kate Ferguson and Martin Beckford, The Sun, May 23, 2019]. The Tories look like they are going to be wiped out in the upcoming European Union elections. In contrast, the Brexit Party, headed by the charismatic Nigel Farage, the man who made Brexit possible, is surging—and may even become a force in domestic British politics, not just the European Parliament [The Brexit Party Poses an Existential Threat to the Tories, by John O’Sullivan, National Review, May 22, 2019].

Obviously, this just proves the uselessness of the center-right when it deliberately spurns nationalism. This is the same story happening all around Europe—and we’ll likely see the proof in the upcoming elections, with a predicted nationalist surge.

Yet the Left knows a nationalist Right is a real threat because it can actually win working-class votes and build a real majority. So it’s responding the only way it knows how—through violence.

The newest trend is throwing milkshakes at conservative/nationalist candidates. Among those hit are Carl Benjamin, known as Sargon of Akkad on YouTube, and Stephen Christopher Yaxley-Lennon, better known as Tommy Robinson [The British have made throwing milkshakes at the far-right a thing, by Shane Croucher, Newsweek, May 21, 2019]. Some British papers are actually supporting these actions explicitly. “No, throwing milkshake at someone is not an act of political violence,” says John Elledge in The New Statesman. [May 21, 2019] However, “inciting hate” is violence and “all those fascists” are leading to violence he says. Yet it’s hard to seriously argue that Sargon of Akkad and Tommy Robinson are “fascists.”

Certainly, Nigel Farage is no fascist. But he’s also been hit with a milkshake. And CBS This Morning thought this was absolutely hilarious. “In the latest of a series of attacks on right-wing politicians, Brexit Party Leader Nigel Farage was doused with a milkshake yesterday,” said Tony Dokoupil. “That was actually salted caramel if anyone was wondering.” He later added, after laughter from his co-hosts: “I’m sure it feels great. I’m sure people love the feeling. Pictures fly around the world” [CBS Hosts Laugh at Dumping Milkshakes on ‘Right-Wing’ Politicians: ‘I’m Sure It Feels Great,’ by Scott Whitlock, Newsbusters, May 21, 2019].

Let’s stop here a moment. Can you imagine, even for a second, what would happen if this was done to a left-wing politician? The hysteria would be overwhelming.

It’s especially ludicrous because the United Kingdom has some of the strictest restrictions on free speech in the Western world. You can be arrested simply for criticizing immigration in the wrong terms. For example, Jayda Fransen, who was a member of a group called Britain First and who was once retweeted by President Trump, was arrested just for making a speech criticizing Islam [Britain First Deputy Leader Jayda Fransen Arrested Over Belfast Rally Speech, by Jack Sommers, Huffington Post, November 19, 2017]. Police in the United Kingdom regularly arrest people for crude online speech that, while offensive at times, is relatively common on both the Left and Right in the United States [Twitter racism: how the law is taking on the ‘Twacists’ by Owen Bowcott and Katy Roberts, The Guardian, March 27, 2012]. The difference is, of course, it’s overwhelmingly enforced only against the Right. In 2016, more than 3,000 people were arrested for online comments [British people arrest at least 3,395 people for ‘offensive’ online comments in one year, by Jack Montgomery, Breitbart, October 14, 2017].

We thus have a situation in Great Britain where speech is violence, and violence is speech. This is what Sam Francis meant by anarcho-tyranny; the law-abiding are repressed, and lawbreakers are coddled.

In America of course, we at least have the First Amendment. But even that is becoming increasingly meaningless as powerful institutions crack down on what used to be our basic rights of free speech.

As for me—my standard is simple. People can say what they want, and don’t have the right to assault others. It’s sad that this is controversial today.