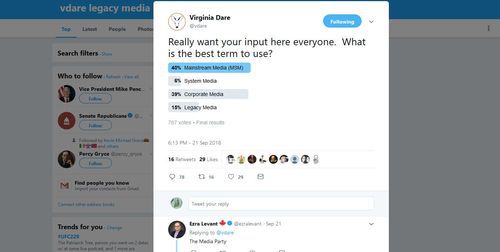 VDARE Radio: What’s In A Name?

We recently did a quick poll on Twitter asking our readers what they thought was the best term: “Mainstream media,” “System media,” “Corporate media,” and “Legacy media.”

Really want your input here everyone. What is the best term to use?

“Mainstream” media won a plurality with 40 percent, though it was essentially a tie with “corporate media” at 39 percent. “Legacy” media, which is a term you see thrown around occasionally, got 15 percent and “System” media only got five percent.

The question of nomenclature is important because it gets to the heart of what journalists really represent. Saying mainstream media shows that journalists are just promoting the dominant narrative and we are presumably presenting something different and unique. On the other hand, it also sets them up as centrist and normal, which they are not.

Corporate media, which essentially tied for first, is a bit more useful. Journalists like to represent themselves as speaking truth to power, but in reality, they tend to speak power to truth. Their newspapers, after all, tend to be owned by billionaires.

Actually, they tend to be the same billionaires that push Open Borders policies. Carlos Slim, the Mexican billionaire, was the financial savior of The New York Times—and now that paper is constantly calling for more immigration. Jeff Bezos is anti-Trump, and, not coincidentally, owns the Washington Post. Calling journalists the “Corporate Media” is a good way to identify them for what they really are—hatchet men dispatched by the corporate elite to go after those who might pose a threat to the status quo.

Legacy media has been tossed around as people try to create a distinction between the so-called new media on the Internet and the media outlets that have emerged from the television networks and newspapers. Yet all of these groups are already online. What’s more, so-called “new” media or independent media outlets are basically being rolled up and destroyed because of how they are targeted by social media companies. Google messes with search results, Facebook selectively bans or changes its algorithm, and Twitter simply wipes out accounts it doesn’t like. The “independent” news sources that survive, even those not formally aligned with a television network or newspaper, are those that don’t offend any of these interest. “Legacy” media doesn’t quite capture that.

“System media” is something that some more radical authors use, but if this poll is any indication, our readers don’t like. Perhaps it raises too many questions—what is the System, who controls it, what is wrong with it? A term that raises more questions than it answers isn’t very good. So it’s probably best not to use it.

Could the most popular terms be combined? A “mainstream corporate media?” It’s a bit of a mouthful, though it’s definitely the most descriptive. Probably too awkward to be used though.

The bottom line is that the American Right, especially conservatives, need to do more than just blast media “bias.” Rightists need to think about what journalists fundamentally are, what their role is and who they are defending. It’s no secret that since President Trump’s election, what Steve Bannon called the Opposition Party has been utterly fanatical in trying to take down his administration. Yet few have pointed to how they are also going after his supporters, the “forgotten man and woman” that President Trump often spoke out during his campaign. All journalists are biased, just as every person is biased. But why they are being used in this way, who funds them, and what the overall agenda is are questions very few conservatives are asking. Instead, they keep asking why the other side won’t play fair in what is already a rigged game.

All politics, just like all war, is ultimately a media war. That’s why it is so important to support media that supports you. We hope we can count on your support for VDARE.com. We aren’t part of the mainstream media—or the corporate media for that matter. We’re the media source for the real America. And for us to keep sticking up for you real Americans, we hope that you will stick up for us.