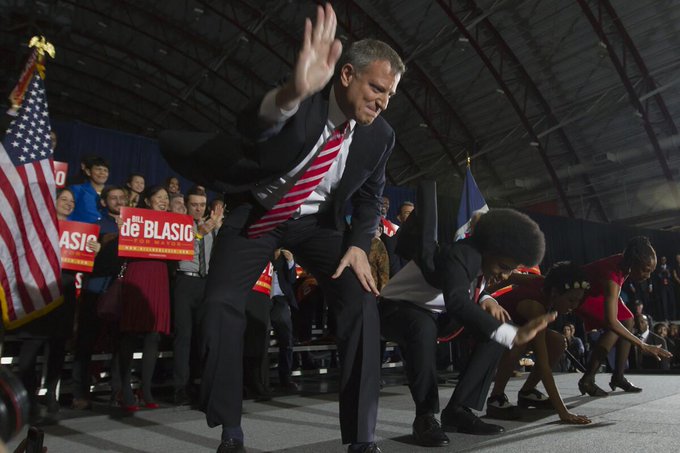 It is the best of times and the worst of times in the Big Apple and the Big Easy. New Orleans is losing its black population, and New York City has chosen to cater to the non-white underclass. The diverging future of these two iconic cities may show the real truth behind success and failure in urban America.

The spectacle of the nominally white leader of the world’s greatest city cavorting like an African autocrat on election night was an ominous sign for a city that has only recently emerged from ruin. New York City has turned its back on the policies that saved it. Its people apparently would rather destroy their city than be thought politically incorrect.

In a scene that resembled the Third World rave from the Matrix: Reloaded, de Blasio told his ecstatic supporters that “make no mistake—the people of this city have chosen a progressive path.” However, the real cinematic metaphor is John Carpenter’s apocalyptic Escape from New York, which portrayed the Big Apple as a maximum security prison for violent criminals.

This isn’t far from what happened the last time the city chose a “progressive path.” In 1990, New York City endured a nightmarish 2,245 murders. Although the Washington Post celebrated the return of “liberal governance,” [Bill de Blasio wins mayor’s race in New York, ushering in new era of liberal governance, by Phillip Rucker, November 5, 2013], the truth is we’ve seen this movie before–when New York City inspired such dark visions of urban life as Taxi Driver, Death Wish, and The Warriors.

New York’s collapse was averted by law and order mayors including Rudolph Giuliani and Michael Bloomberg. These mayors waged a war on crime with tactics like “stop and frisk.” Needless to say, this prompted cries of “racism,” although both the perpetrators and the victims of violent crime are overwhelmingly blacks or Hispanics. [NYPD statistics show 96 percent of shooting victims are black or Hispanic and that minority groups represent 89 percent of all murder victims]Stats seem to buttress Police Commissioner Raymond Kelly's justification for controversial stop-and-frisk policy, by Rocco Parascandola , New York Daily News, September 5, 2012]

Unfortunately for New York, this underclass serves as de Blasio’s support base. It’s not going to pretty once the inmates run the prison. We saw what that looks like in New Orleans, especially during Hurricane Katrina. That repressed episode in American history showed that the veneer of Western Civilization can be stripped away in a day.

The German left-wing newspaper Die Tageszeitung reported at the time, “The fast and safe evacuation was white, leaving behind poor black people, as if time had stood still between the racial unrest of the sixties and today.”

After the black run civic infrastructure collapsed, those “[left] behind” in New Orleans took the opportunity to indulge in racial attacks on whites.

New York Times columnist Bob Herbert noted that many residents (even some blacks) wanted a less “Chocolate City.” He wrote in 2007,

During the immediate post-Katrina period, there were essentially two visions of a resurgent New Orleans. One, widely decried as racist, saw the new, improved New Orleans as smaller, whiter and more prosperous.

This was openly advocated. Just a few days after the storm, a wealthy member of the city’s power elite, James Reiss, told The Wall Street Journal: “Those who want to see this city rebuilt want to see it done in a completely different way: demographically, geographically and politically.”

This is largely a reaction to black crime. An examination of 200 criminal homicides in New Orleans from 2009 to 2010 showed that over 91% of the victims were black and over 97% of the known first offenders were black. [Most murder victims in big cities have criminal record: Up to 91% arrested before becoming target of violence, WND, March 4, 2013]:

The new New Orleans is capitalizing on this with an emphasis on tourism. In 2012, the city drew a record $6 billion in tourism.

But what is still holding the city back is its reputation for crime. Mayor Landrieu has put money behind the NOLA FOR LIFE campaign to deal with the problem. Despite the name, it’s not about abortion – instead, the program specifically singles out the black population as violent.

"Bright young lives are being snuffed out on New Orleans' streets daily," said [Spike] Lee, the award-winning director of "When the Levees Broke." "Our young black men are killing each other like it's a self-imposed genocide. It is our job, our responsibility to make them understand the value of their lives and help them to achieve their greatest potential."

The campaign, called "Flip the Script," focuses on "changing the attitudes of and about young black men," the mayor said. It is part of Landrieu's "Nola For Life" initiative to halt the city's murder rate, a rate 10 times the national average with a killing every two days on average.

"Nola, we have a problem," reads the homepage of the campaign's website, nolaforlife.org.

Actually, black New Orleans has a problem. Without a large black presence in NOLA, the city would have a crime-rate roughly comparable with that of Key West, Florida.

However, that problem is less severe than it was before—and New Orleans tourism is growing as a result.

You can bet the Chamber of Commerce of New Orleans will be watching what happens closely, knowing that New York’s tourist dollars will be up for grabs.

It follows that a smaller black population means that crime will decrease, allowing New Orleans to acquire tourism revenue. Meanwhile, as de Blasio prepares to reverse the accomplishments of Rudolph Giuliani, we can expect to see a corresponding rise in crime – and a return to the Bad Old Days of David Dinkins’s New York City.

We may be on the verge of a great reversal. In 10 years, reporters may be writing about the urban blight of New York City – compared to the safe, prosperous city of New Orleans.