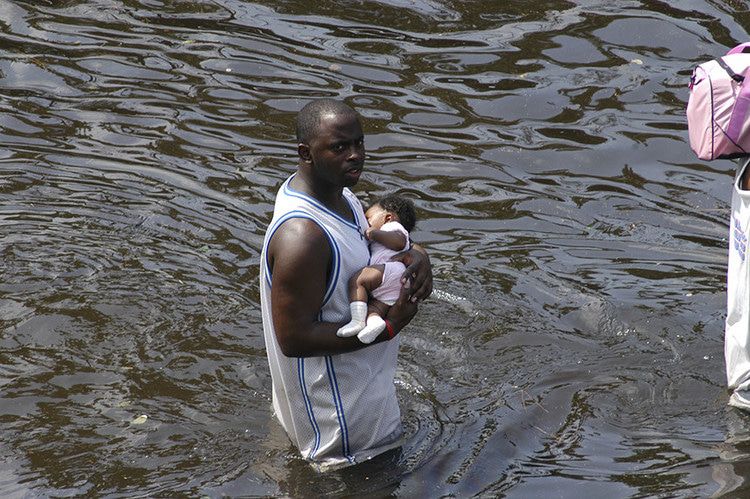 It was the Perfect Storm.

No, not Hurricane Katrina. That could have been much worse. Back in the 1990s, my friend Rob Brennan wrote an unpublished novel called Category 5 about a ferocious hurricane that strikes New Orleans at the worst possible angle. Katrina, in contrast, was a Category 4 hurricane and hit New Orleans only a glancing blow.

No, the perfect storm was actually the combination of social and governmental incompetence at local, state, and federal levels—and unmentionable racial reality.

Republican Presidents are supposed to provide adult supervision for crooked Democratic urban machines. But the White House is now occupied by George W. Bush, a politician so irresponsible, so uninterested in proficiency and honesty among his minions that late last year he tried to appoint as Secretary of Homeland Security the egregious Bernie Kerik.

Mr. Bush shows no evidence of holding his appointees accountable, so long as they remain loyal to him personally. Just as he has never vetoed a bill, he almost never fires anyone for poor performance.

VDARE.com readers are familiar with the contempt with which Mr. Bush treats his sworn duties to uphold the laws against illegal immigration. Now the whole country is starting to catch on to his disregard for his duties in his pursuit of image over effectiveness.

The ineptitude displayed by the Louisiana state government is also unsurprising. The state is unique in having a Latin political tradition (it uses the Code Napoleon rather than the English common law, even though Napoleon didn't release his code until the year after he sold Louisiana to Thomas Jefferson), a culture in which the Argentinean demagogue Juan Peron would have felt at home.

The unofficial state motto is "Laissez les bons temps rouler" or "Let the good times roll." Compare that to New Hampshire's official motto of "Live free or die," which display a rather different understanding of freedom. Louisiana's reigning philosophy is freedom from responsibility.

It's a general rule that the tastier the indigenous cuisine, the lousier the government. Its culture has provided America with jazz, A Street Car Named Desire, and the great American comic novel of the 20th Century, A Confederacy of Dunces. New Orleans is a nice place to visit. But you wouldn't want to raise your kids there.

All this is now common parlance, more or less. What you won't hear, except from me, is that "Let the good times roll" is an especially risky message for African-Americans. The plain fact is that they tend to possess poorer native judgment than members of better-educated groups. Thus they need stricter moral guidance from society.

New Orleans itself is two-thirds black. It has had nothing but black mayors since 1978. All four of them are from the light-skinned "creole of color" elite, including the notorious Marc H. Morial, now head of the National Urban League. The city government is corrupt and lackadaisical. While the police department has perhaps rebounded from the depths it reached a decade ago when an officer was condemned to death for having a mother of three rubbed out by drug gangstas in his employ, nobody should be surprised that last week numerous officers ran away, and some even freelanced as looters.

In a racially diverse democracy like New Orleans, voting for good government takes a backseat to voting for your tribe's representatives in the eternal ethnic tussle over slices of the pie. As the ultra-competent but not terribly democratic founder of the state of Singapore, Lee Kwan Yew, noted in a recent interview:

For instance, after blacks took control of New Orleans, they required new police recruits to live in the city itself as a way to exclude white cops. Dean M. Shapiro writes for Court TV's "Crime Library":

"The department was being depleted of experienced officers and the numbers within the ranks were decreasing as crime stats were rising at an alarming rate… In order to beef up the rapidly dwindling numbers of NOPD, the department was forced to lower its acceptance standards. Recruits with criminal records, DWIs, unfavorable employment records and dishonorable discharges from the Armed Forces were allowed to enter the Police Academy, whereas they had previously been excluded… Their records were expunged and, on completion of their training, they were issued badges, guns and patrol cars and turned loose on the street… These new officers were expected to suddenly straighten up and begin enforcing the laws they had not-so-long-ago been breaking. They were expected to arrest those suspected of crimes, even if those accused had once been their street buddies. But this was an unrealistic expectation."

The state's Southeast Louisiana Hurricane Evacuation and Sheltering Plan made all the right noises about evacuating residents without cars by school bus. But state and local authorities apparently failed to execute, as the famous picture of about 200 New Orleans school buses neatly lined up in a flooded parking lot shows.

It also should have been expected that a large fraction of New Orleans's lower class blacks would not evacuate before a disaster. Many are too poor to own a car, or too untrustworthy to get a ride with neighbors, or too shortsighted to worry.

Judging from their economic and educational statistics, New Orleans' blacks are not even an above-average group of African-Americans, such as you find in Atlanta or Seattle, but more like Miami's or Milwaukee's. About half are below the poverty line. With the national black average IQ around 85, New Orleans' mean black IQ would probably be in the lower 80s or upper 70s.

And of course nobody, despite what they may say, is all that much startled that, when the city's whites and more prosperous and/or foresightful blacks left, New Orleans quickly turned into its demographic analog, Haiti—where 2004's Tropical Storm Jeanne unleashed similar mayhem and chaos.

Bill Quigley, a law professor at Loyola of New Orleans who represents political prisoners in Haiti, stayed behind with his wife, who is a nurse. He noted:

In contrast to New Orleans, there was only minimal looting after the horrendous 1995 earthquake in Kobe, Japan—because, when you get down to it, Japanese aren't blacks. For example, the per capita imprisonment rate for Asian-Americans is about 1/30th that of African-Americans.

Nor is it surprising that the black refugees at the Superdome and the convention center failed to get themselves organized to make conditions more livable. Poor black people seldom cooperate well with each other because they don't trust other blacks much, for the perfectly rational reason that they commit large numbers of crimes against each other.

Indeed, as Francis Fukuyama's best book, Trust, makes clear, in most of the world—outside Japan and the more British-Germanic-Nordic parts of Europe and their overseas offspring like America—people seldom trust fellow citizens beyond their extended families enough to voluntarily come together to solve community problems. Force is generally needed to get them to work with each other. Which is why "civic society" is relatively rare.

(Why Mr. Bush wants to import vast numbers of additional immigrants from cultures where unrelated residents have no tradition of self-organizing as free individuals is a mystery for another day.)

But if all these disasters in New Orleans should have been expected, why did nobody at any level of government act as if they expected them?

Because to anticipate the problems would require noticing that racial differences are relevant. And that can ruin one's career.

New Orleans should remind us that we still live in a harsh world. The make-believe that passes for public discourse, even at the elite level, simply isn't adequate for protecting American citizens.