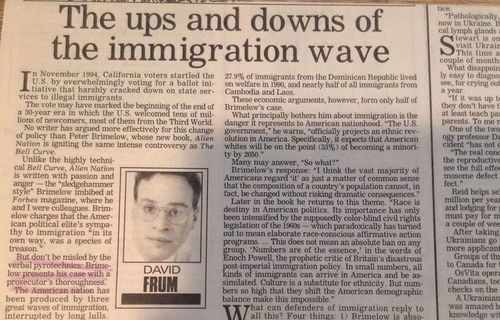 David Frum has just published a powerful polemic in the Atlantic about immigration. It's so strong, in fact, that if a right-wing website published it, it would be called an "anti-immigrant screed." Frum gives Ann Coulter all the credit for getting Trump up to speed on immigration.

What seems to have changed Trump’s mind is a book: Adios America by Ann Coulter. The phrase “political book of the year” is a usually an empty compliment, but if the phrase ever described any book, Adios America is it. In its pages, Trump found the message that would convulse the Republican primary and upend the dynastic hopes of former-frontrunner Jeb Bush. Perhaps no single writer has had such immediate impact on a presidential election since Harriet Beecher Stowe.

There's story (it's apocryphal) that when Abraham Lincoln met Stowe he said "So you're the little woman who wrote the book that made this great war!" That's how big an event Adios, America is.

Adios America is an avalanche of an essay, a cascading torrent of quips, facts, and statistics. Furiously polemical, mercilessly indignant, utterly indifferent to balance and context, Coulter batters the reader with what might be called the “reverse valedictorian”: instead of the usual heartwarming stories of immigrant success, she immerses the reader in incidents of immigrant crime, failure, and welfare abuse.

A Chinese immigrant in New York, Dong Lu Chen, bludgeoned his wife to death with a claw hammer because she was having an affair. He was unashamed, greeting his teenaged boy at the door in bloody clothes, telling the boy he had just killed mom. Brooklyn Supreme Court Justice Edward Pincus let Chen off with probation—for murder—after an anthropologist testified that, in Chinese culture, the shame of a man being cuckolded justified murder ... The female head of the Asian-American Defense and Education Fund, Margaret Fung, applauded Chen’s light sentence, saying that harsher penalty would “promote the idea that when people come to America they have to give up their way of doing things. That is an idea we cannot support.” At least Chen came to the United States based on his specialized knowledge of nuclear cell extraction biology. No, I’m sorry—Chen emigrated to the United States with his entire family when he was fifty years old—fifteen years away from collecting Social Security—to be a dishwasher.

Two of the most famous murder sprees of the 1990s were also perpetrated by legal immigrants. The 1993 Long Island Railroad massacre that left six passengers dead was committed by Jamaican-immigrant Colin Ferguson ... In 1997, Christopher Burmeister, a twenty-seven year old musician, was shot in the head and killed by Palestinian immigrant Ali Hassan Abu Kamal at the top of the Empire State Building. Burmeister’s band mate, Matthew Gross, also took a bullet to the head but—after eight hours of surgery—survived. Gross now lives in a group home in Montclair, New Jersey, with other brain-damaged men, taking daily medication for his seizures. The assailant, Abu Kamal, had immigrated to America with his entire family two month earlier—at age sixty-eight. It’s a smart move to bring in older immigrants well past their productive years, so we can start paying out Social Security right away.

Coulter’s core message, “immigration isn’t working as promised,” is joined to a second message equally central to the Donald Trump campaign: “We are governed by idiots.”

Those are messages that resonate only louder after the San Bernardino massacre, in which one of the killers entered the country on a fiancée visa issued to a nonexistent address in Pakistan. 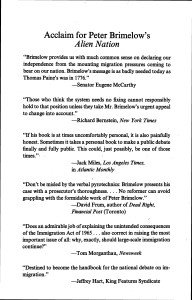 As I've said before, while we’ve criticized David Frum for many kinds of wrongheadedness about foreign policy and black crime, he’s always had a clear idea of what’s going on with immigration.  So clear, in fact that he gave Alien  Nation, by Peter Brimelow, now Editor of VDARE.com, a positive review in a Canadian paper back in 1995. So positive, in fact, that Brimelow's publishers used part of it as a blurb in he  paperback edition. (It's highlighted in the photo above.)

"Don't be misled by the verbal pyrotechnics: Brimelow presents his case with a prosecutor's thoroughness. ... No reformer can avoid grappling with the formidable work of Peter Brimelow." — David Frum, author of Dead Right

We've posted most of the Alien Nation reviews from that year, but this one got missed—here it is, just as a reminder to all the people who prefer, for whatever reason,  not to grapple with "formidable work of Peter Brimelow."

The Ups And Downs Of The Immigration Wave

In November, 1994, California voters startled the U.S. by overwhelmingly voting for a ballot initiative that harshly cracked down on state services to illegal immigrants.

The vote may have marked the beginning of the end of a 30-year era in which the U.S. welcomed tens of millions of newcomers, most of them from the Third World.

No writer has argued more effectively for this change of policy than Peter Brimelow, whose new book, Alien Nation is igniting the same intense controversy as The Bell Curve.

Unlike the highly technical Bell Curve, Alien Nation is written with passion and anger—the “sledgehammer style” Brimelow imbibed at Forbes magazine, where he and I were colleagues. Brimelow charges that the American elites’ sympathy to immigration “in its own way, was a species of treason."

But don’t be misled by the verbal pyrotechnics: Brimelow presents his case with a prosecutor's thoroughness.

The American nation has been produced by three great waves of immigration, interrupted by long lulls. The first arrived from England and (in chains) from Africa in the colonial period, that is between 1620 and 1776.

The second came from Eastern and Southern Europe between 1880 and 1914. The third—the wave landing on America’s shores now—began in 1965, when America rewrote its immigration laws to favor family reunification over skills-based immigration. In 1986, fewer than 8% of all legal immigrants were admitted because of their skills.

It’s Brimelow’s contention that this shift away from the skills based immigration of the 1950s and ‘60s has brought nothing but trouble to the U. S. In 1970, immigrants on average eared some 3% more than native-born Americans.

More worrying, the current wave of immigrants are ending up on welfare far more than the immigrants of 1950-1970: while immigrant households were slightly less likely to rely on welfare than natives in 1970, in 1990, immigrants were nearly 25 percent more likely to take it.

These economic arguments, however, form only half of Brimelow’s case.

What principally bothers him about immigration is the danger it represents to American nationhood. “The U.S. Government” he warns, ”officially projects an ethnic revolution in America. Specifically, it expects American whites will be on the point (53%) of becoming a minority by 2050.”

Many may answer “So what?”

Brimelow’s response: “I think the vast majority of Americans regard ‘it’ as just a matter of common sense that the composition of a country's population cannot, in fact, be changed without risking dramatic consequences.”

Later in the book he returns to this theme: “Race is destiny in American politics. Its importance has only been intensified by the supposedly color-blind civil rights legislation of the 1960s—which paradoxically has turned out to mean elaborate race-conscious affirmative action programs…This does not mean an absolute ban on any group. "Numbers are of the essence” in the words of Enoch Powell, the prophetic critic of Britain's disastrous post-imperial immigration policy. In small numbers, all kinds of immigrants can arrive in America and be assimilated. Culture is a substitute for ethnicity. But numbers so high that they shift the American demographic balance make this impossible.

What can defenders of immigration reply to all this? Four things 1) Brimelow is absolutely right the basis for acceptance as an immigrant must be skill or capital. Happily Canada hews much more closely to such policy than the U.S. 2) Brimelow is right again that it’s dangerous for a lavish welfare state to open its gates to immigration —but that’s an argument against lavish welfare, not against immigration. 3) Brimelow is right once more that immigrants should be expected to assimilate to the culture of their chosen home—but that’s an argument against multiculturalism and affirmative action, not immigration. But 4) even so, Brimelow is wrong to despair of the continuing success of immigration.

What evidence we have strongly suggests immigrants to the U.S. and Canada do quickly learn English, do rapidly intermarry, and do acculturate. In other words: Immigration needs reform, not abolition.

But no reformer can avoid grappling with the formidable work of Peter Brimelow.