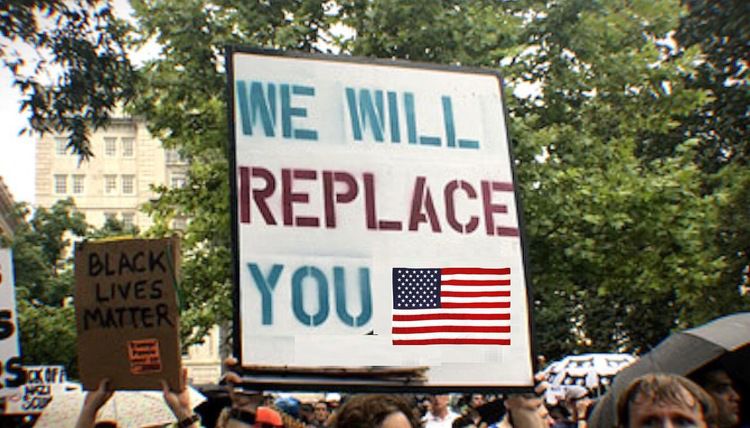 “The Cold Civil War” is heating up with the fight between President Donald Trump and “The Squad” of Leftist minority congresswomen, particularly former refugee Ilhan Omar. The question in this political struggle is as fundamental as the one at the center of the more violent 19th century conflict: The Republican base clearly believes the U.S. is a majority-white country rooted in the traditions of the Founding—the Historic American Nation. But Democrats (and some of the controlled opposition in Conservatism Inc.) think America belongs to the entire world—that it isn’t really a nation at all. This is an irrepressible conflict. and lines are clearly drawn between a GOP base that believes in the old America and Leftists who explicitly want to replace it.

President Trump’s base is to the right of the Commander-in-Chief himself. Thus the Main Stream Media smeared Trump’s tweets against Ilhan Omar and others a “racially charged attack,” but grassroots Republican support for the president actually increased afterward. [Republican support for Trump after racially charged tweets: Reuters/Ipsos poll, by Chris Kahn, Reuters, July 16, 2019] This is especially striking because most of Conservatism Inc. condemned him in hysterical terms.[Donald Trump’s Tweets Were Malicious, and Republican Silence is Deafening, by David French, National Review, July 15, 2019] At the most recent rally, it was the attendees who spontaneously chanting “send her back” in reference to Ilhan Omar. [Trump blasts 4 congresswomen; crowd roars, ‘Send her back!’, by Deb Reichmann, AP, July 18, 2019] Beltway Right types and the Main Stream Media condemned it in their typically scripted way. And back in the White House, Trump backed off—putting him the extraordinary position of disavowing his own voters. [Trump disavows ‘send her back’ chant from his rally, Politico, July 18, 2019]

The Republican base clearly wants real action on immigration, including deportations and a wall. Yet little has materialized. There’s bluster, but no action. President Trump speaks loudly, but carries a small stick. If he’s just going to denounce people for repeating his own opinions, he’d be better off not saying anything at all. [Trump says not happy with backers’ ‘send her back’ chant, AP, July 18, 2019]

At the rally, President Trump had criticized “hate-filled extremists who are constantly trying to tear our country down,” bringing back the old right-wing talking point of love it or leave it. Journalists, Leftist activists and, inevitably, some Beltway Right types, are all claiming this rhetoric endangers Representative Omar. [Democrats call for increased security after ‘send her back’ chants, by Cristina Marcos and Mike Lillis, The Hill, July 18, 2019] Yet we’ve seen this exact scenario before when Omar accused the rather tame Congressman Dan Crenshaw of “incitement” for questioning her characterization of September 11 as “some people did something.” Omar has explicitly stated the U.S. was founded on “genocide” and brags about the replacement of the white population. If you take an oath of allegiance to a country, and then work to replace the people and fundamentally change it, how is that not treason?

Yet for treason to exist, there has to be something to betray. Unfortunately for many in the Beltway Right, America is not a real country, simply an abstraction, a vessel carrying abstract “values” that only they seem to believe in. As Steve Sailer pointed out, Conservatism Inc. figures like George W. Bush were, ironically, united with the late Muammar Gaddafi in believing that America does not belong to any one group.

Yet the situation may even be worse than that—whites may be the one group that has no right to America. Of course, as VDARE.com readers know, whites have been told for decades to “go back to Europe” i.e. the country really belongs to “Native Americans”. [The US government should cede territory back to Native Americans, by Timothy Snyder, The Guardian, April 28, 2018] Even immigrants to this country lecture us that this is “stolen land”—claims repeated by an adoring Main Stream Media. “Blood and soil” is fine, it just depends on who is saying it. 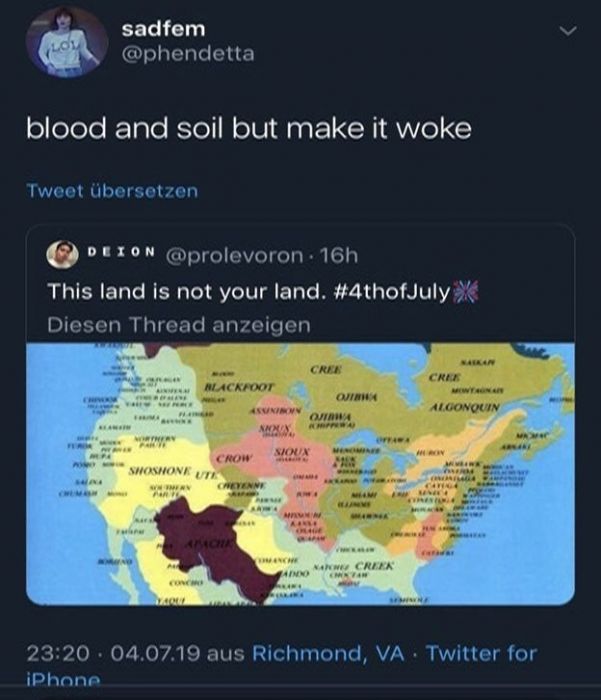 Indeed, it’s the liberals who are openly declaring in publications like Mother Jones that there is a “race war.” The recent terrorist attack against an ICE facility—and the immigrant attacker’s explicit call for armed insurrection—was also downplayed by the MSM. Even mainstream Democrat candidates like Elizabeth Warren are essentially advocating Open Borders, as even Leftist publications admit. The Third World’s population is soaring and so-called “moderates” like Joe Biden are declaring we have an “obligation” to provide health care for all of them who make it here. All this is happening at a time when deficits and spending are skyrocketing (but, somehow, there’s no money for the wall.) [Here comes McConnell budget ‘deal’ that will rule the rest of Trump’s presidency, by Daniel Horowitz, Conservative Review, July 18, 2019]

In short, this isn’t sustainable. What’s more, whatever President Trump’s bluster, the numbers tell the tale. Because of sheer demographics, Texas will soon go blue—and then Republicans will be unelectable nationally, barring a massive political realignment.

Soon, it might not be conservatives saying “love it or leave it” to diverse people of color—but smug non-whites telling white conservatives to get out of their new country.

The problem is that though America belongs to Native Americans and Africa belongs to black Africans (not Afrikaners, needless to say), Europe apparently belongs to the world. There’s nowhere to go. Even if white Americans en masse packed up and went back to Europe, the Ilhan Omars of the world would soon follow. The post-1945 dissolution of the European empires was, in retrospect, pointless.

As the issues of socialism, busing, and health care are re-emerging, America is running out of white people to prop up collapsing institutions, pay the bills, fight the endless wars, and solve the country’s problems. The future belongs to whoever can develop an exit from the global favela that is emerging. [The Global Favela, by Gregory Hood, Radix, July 6, 2016] Serious countries like Israel and Hungary understand this, and are likely to survive the next century in recognizable form. America may not.

What is happening is the logical conclusion of the disastrous 1965 Hart-Celler Immigration Act, which reignited mass immigration after a four-decade legislated pause. The abolition of national origins preferences implied that the United States did not have a racial, ethnic, or even cultural base. Thus, America was transformed into a “nation of immigrants” or a “universal nation” even if some of those who voted for the act did not recognize what they were doing. Today, even many “conservatives” accept that America is a “Proposition Nation,” and that if people agree to certain ideas, anyone can be an American. This apparently includes President Trump, who says certain people “hate our country” because, among other reasons, they are “anti-Israel.”

Unfortunately for President Trump and the Republicans, there’s no agreement on what these defining universal values should be. “Four in 10 Americans Embrace Some Form of Socialism,” according to Gallup. If love for Israel is a core American value, more people are against that too, basically a function of recent non-traditional immigration. Needless to say, the bare minimum symbols that define American national identity—including the flag, the national anthem, and the Fourth of July—are now all under attack. It’s hard to have a “Proposition nation” when no one knows what the “proposition” is. We barely even have free speech anymore.

Instead, what’s shaping up is a zero-sum conflict. The Democrats define themselves as the opponents of the Historic American Nation and what they see as its unacceptable history. President Trump won office because Americans who love that nation sensed that he would defend it and them. It’s the Great Replacement Party versus what VDARE.com Editor Peter Brimelow terms the Generic American Party.

But there’s one big difference. The Democrats never discourage their voters, deplore their extremism, or disavow their most radical tactics. In contrast, the Conservative Movement ™ is arguably defined by this sort of self-policing.

Trump won in 2016 by breaking the mold and unleashing powerful National Conservative forces. His subsequent shameful retreat suggests that he is transforming into just a standard-issue Republican candidate. If he (or his family) thinks this defensive stance will bring him victory in 2020, he’s a fool, and he’ll probably (but, alas, not certainly) meet the same fate as John McCain, Mitt Romney, and other Republican losers.

Yet that nationalist base will remain, looking for a champion, desperate for a leader. It can’t be suppressed forever.