Recently the Zman said on his podcast

This is a great point. Back before the Civil War, escaped slave Frederick Douglass asked "What to the Slave is the Fourth of July?" His answer: not much. And to the slaves’ descendants, apparently, less.

We might now ask "What To The White Man, Is Juneteenth?"

Juneteenth, as many people have only recently learned, is the day, two months after the surrender at Appomattox, that slaves in Texas finally learned, from Federal troops, that the Confederacy had lost, and they were now free, thanks to the wartime 13th Amendment. (Not the Emancipation Proclamation—that applied only to slaves in states that were in rebellion, so that, for a brief bizarre period, one person legally enslaved in places where General Grant was campaigning was a maid owned by Mrs. General Grant, who often accompanied her husband and was not required to free her slave because she herself was not a rebel.)

This is the whole point of the New York Times’s much-refuted, but not withdrawn or apologized for “1619 Project.” Their idea—their crazy idea—is that the American colonists only rebelled against Britain because they could see into the future, and realized that 19th Century Britain would become abolitionist, and free their slaves.

Be that as it may, one of the reasons many blacks have been refusing to stand for the anthem is that they’re not loyal to the United States of America because the Historic American Nation is white.

Now there’s a plan to play “Lift Every Voice And Sing,” known—unofficially—as the Black National Anthem, at NFL football games. 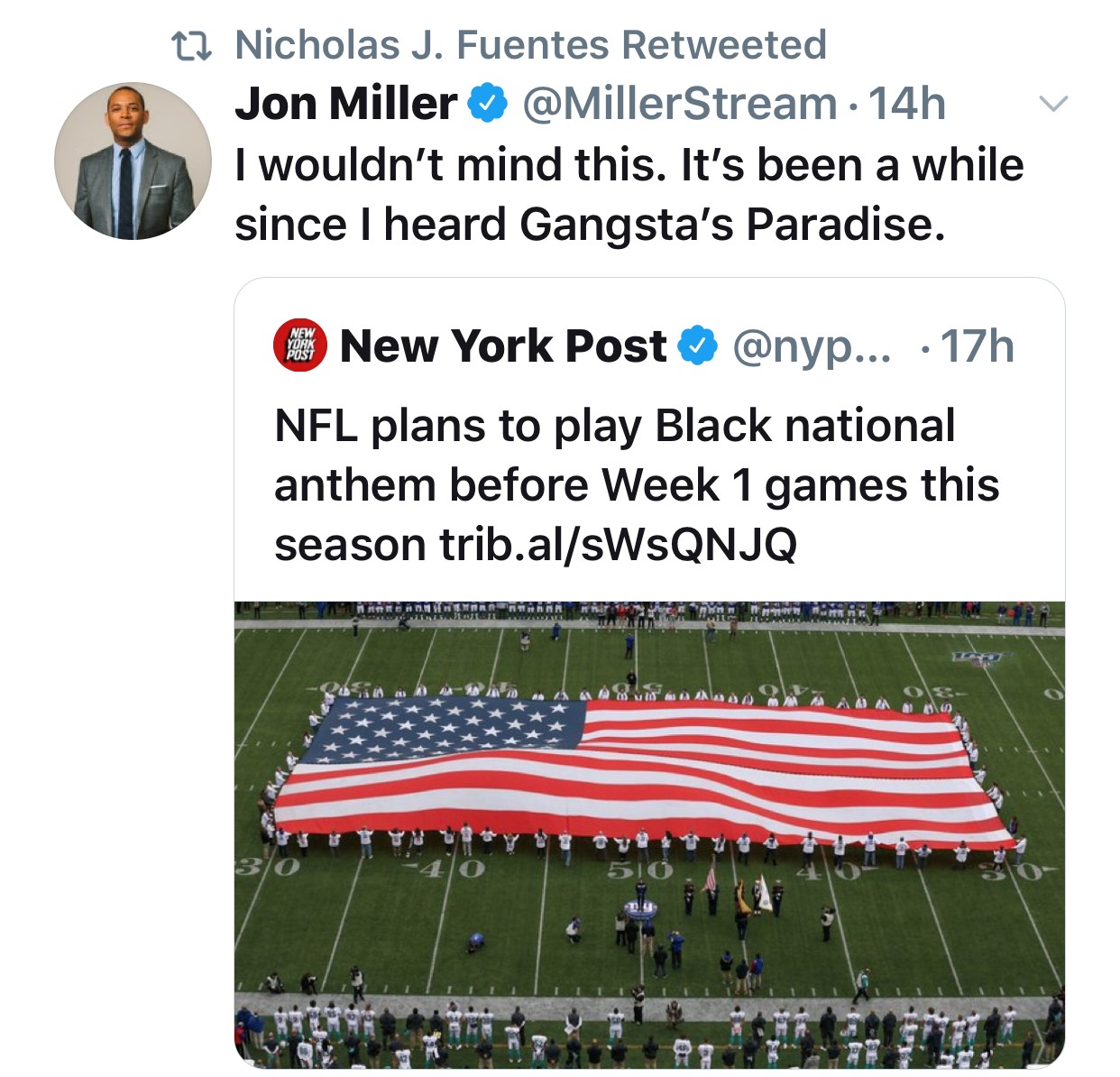 However, if you go to black events, at say, a black church, or a “Historically” black college, you’ll hear a lot of “Lift Every Voice”. Written by James Weldon Johnson in 1900, it was promoted  in 1919 by the New York Branch of the NAACP as the “Negro National Anthem.” The NBA played it two years ago during Black History Month [Several NBA Teams Celebrated Black History Month By Playing ‘Negro National Anthem’ At Games, by Warner Todd Huston, Breitbart, March 1, 2018]. It’s also the unofficial anthem of what’s left of Detroit.

Black Trump-hater Jemele Hill said on Twitter “I can’t wait until the NFL figures out nobody black knows the second verse of Lift Every Voice and Sing.” This is probably true, although many white people don’t know all the verses of the “Star-Spangled Banner”—which contains no reference, as I’ve explained, to American black slavery.

The  first verse of “Lift Every Voice And Sing “ends with “Let us march on ’til victory is won,” which makes you ask “Victory over who?” The third verse is unacceptably religious in 21st century America, and ends on what is probably an unacceptably patriotic note for 21st century black America.

God of our weary years,
God of our silent tears,
Thou who has brought us thus far on the way;
Thou who has by Thy might
Led us into the light,
Keep us forever in the path, we pray.
Lest our feet stray from the places, our God, where we met Thee,
Lest, our hearts drunk with the wine of the world, we forget Thee;
Shadowed beneath Thy hand,
May we forever stand,
True to our God,
True to our native land.

Emphasis added. The “native land”, here, is America. Black Americans whose ancestors have been in America since before the Civil War do have some claim to be natives in ways that Mexican immigrants, and even modern African and West Indian immigrants do not. However, it is increasingly clear that, with a few honorable exceptions, most black Americans are not patriotic at all.

The late Sam Francis covered this in two columns, Dismantling America (contd.): Guess What Flag's Not Coming To Dinner (it was the American flag, that a black legislator refused to salute) and Enemies, Not Friends, Of Confederate Flag Want War, May 5, 2000.

In the latter column, Sam wrote about NAACP activists who would chant "Your Heritage Is Our Slavery" at anti-Confederate flag demonstrations.

Of course, in saying that, they are actually saying that American blacks are not really part of American civilization, which is defined in large part by the heritage its past created. If all black Americans can see in the American past is their own slavery, oppression and exploitation, how can they claim to be part of the nation? And why would they want to be?

That, broadly was the position of the Reverend Jeremiah Wright (remember him?). It's more or less why Muhammad Ali refused to fight for his country in the Vietnam War. It's even the default position of Michelle Obama, who said, as her husband approached victory in the primaries, "for the first time in my adult life, I am proud of my country."

Of course it wasn’t the official position of Barack Obama—at least as long as he was running for President and needed white voters.

But if black Americans, as Thomas Jefferson said in a clause notoriously censored from his monument, “that the two races, equally free, cannot live in the same government” and if they hate America, the past, Jefferson himself, George Washington, and the Fourth of July, then let them have Juneteenth.

John Adams, who was one of those white Founders are now threatened, said Independence Day should be celebrated with "solemnized with pomp and parade, with shows, games, sports, guns, bells, bonfires and illuminations."

The striking thing is that he predicted this with such confidence on July 3, 1776, just after they'd voted for the Declaration, and before they’d even started the War of Independence.

"You will think me transported with enthusiasm; but I am not. I am well aware of the toil, blood, and treasure, that it will cost to maintain this Declaration, and support and defend these States; yet through all the gloom I can see rays of light and glory; I can see that the end is worth more than all the means; that posterity will triumph, although you and I may rue, which I hope we shall not."

He was right, and his posterity can continue to triumph and see “rays of light and glory” if they can remember, once more, that “the end is worth more than all the means.”

Happy Independence Day from your friends at VDARE.com!