HIAS Now Whines About Religious Test On Entrants, But Was OK When Jews Benefited. Solution: Zero Refugees In 2018!

HIAS, the refugee resettlement contractor formerly known as the Hebrew Immigrant Aid Society, has redefined “chutzpah.” HIAS is suing the Trump Administration for supposedly unconstitutionally discriminating by pausing immigration from three predominantly Muslim nations. But religious discrimination, along with reckless refugee resettlement programs, built HIAS. Fortunately, President Trump can stop the argument through executive action, by determining that next year’s refugee ceiling should be zero.

Like all refugee contractors, HIAS is not so much a charity as a conduit for taxpayer money. It is paid by the US government more than $20 million a year to prepare “refugees” overseas for travel to the U.S. and then to assist them (somewhat) once they arrive. For this, HIAS CEO Mark Hetfield [Email him] receives some $359,000 annually. Only David Miliband [Email him]of  the International Rescue Committee gets more ($592,000) [Updating financial data on refugee contractors, big bucks for ‘humanitarian’ work, by Ann Corcoran, Refugee Resettlement Watch, July 11, 2017].

But HIAS, like other refugee resettlement groups, rarely does more than dump their “clients” on public services provided by the various unfortunate target cities before moving on the next set.

HIAS, along with other pro-immivasion groups, declared in its suit:

The Executive Order violates two of our most cherished constitutional protections: the guarantee that the government will not establish, favor, discriminate against, or condemn any religion, and the guarantee of equal protection of the laws…. There is no statutory, regulatory, or constitutional basis for favoring refugees from minority faiths over refugees from majority faiths.

This is completely hypocritical. In fact, since the Refugee Act of 1980, most of HIAS’s “clients” have arrived as a result of a religious test of one sort or another.

At least 400,000 refugees have been admitted to the U.S. on the basis of a religious test: the Lautenberg Amendment, an apparently unkillable relic of the Cold War. During the Soviet era under this law, Jews (as well as a figleaf of Evangelicals and certain Ukrainian Christian denominations) were required only to prove that they were members of the protected religious category. Evidentiary standards for proof of persecution were reduced to near nil.

The numbers coming in under Lautenberg categories dropped sharply after Israel succeeded in diverting the flow of Soviet Jews to Israel in the late 1990s. And, of course, the fall of Communism removed the purpose of the law completely. Nevertheless, it is still on the books and applies today to the Soviet Union’s 15 successor states.

The shortage of Jewish refugees “clients” was the main reason HIAS switched from resettling Jews to resettling very different groups. It also dropped the “Hebrew” from its name and is now just identified by a four-letter former acronym. (With HIAS providing “intensive case management” to “lesbian, gay, bisexual, and transgender (LGBT) refugees” as part of the “Preferred Communities” project, some have suggested that HIAS now means “Homosexual Immigrant Aid Society”).

In 2002, then-HIAS CEO Leonard Glickman answered questioners puzzled by the fact that the contractor was now importing Muslim Somali Bantus by claiming "the more diverse American society is the safer [Jews] are." [Community Questioning 'Open Door', by Nacha Cattan, Jewish Daily Forward, November 29, 2002.]Similarly, HIAS vice president Rabbi Jennie Rosenn [Email her] was quoted recently saying of the Syrian refugee crisis: “This is a profoundly Jewish issue and this is an historic moment. Never before have Jews not been refugees, but rather in a position to help refugees. Jews want to respond.” Paradoxically, this seems to means that it’s appropriate for HIAS to focus less on Jews from the former Soviet Union and more on “refugees” from Muslim countries. [The rabbi who rallies American Jews for the global refugee cause, by Renee Ghert-Zand, The Times of Israel, February 7, 2016]

But even the status of some of these “refugees” is determined by a religious test. In 1999, the 1989 law was expanded to cover favored groups in Iran and renamed the Specter Amendment.

Thus Iranians in recent years have been flying from Tehran to Vienna (possibly with the encouragement of Iranian authorities) with a 6-month Austrian visa. Once there, they receive papers for resettlement in the U.S. as refugees. One catch: to even be considered they must pass a religious test by showing they are Jews, Bahai, Christians or Mandeans.

This program for Iranian nationals seems to have continued even though the Trump administration travel ban, in effect until the end of September, specifically bars Iranian nationals. (In fairness, it must be noted that the numbers have fallen off, but according to government reports 654 Iranians arrived on the refugee program from February 1 to July 31. It’s unclear whether some of that number arrived when the on-off-and-on-again ban was in effect.)

HIAS is there on the ground in Vienna and is waiting for refugees of “minority faiths” once they land in the U.S. [HIAS Vienna: Caring for Iranian Religious Minorites, HIAS, Accessed September 7, 2017].

Beyond that, HIAS is on the ground in Africa where it flaunts its special role as a facilitator of LGBT asylum claims in the U.S. [Invisible In The City, by Yiftach Millo, HIAS, February 2013].

And for real chutzpah, consider that HIAS is on the ground in Israel as well. Apparently, HIAS is shipping rejected refugees from Israel to the U.S. According to HIAS’s own website, in Israel “HIAS meets with individuals and families (mostly from Eritrea and Sudan) to help them evaluate options for reuniting with family in other countries, including the United States, Canada, Italy, Australia, Switzerland, and Sweden”. [HIAS Fact Sheet – Israel, Hias, October 22, 2014. Emphasis added]

The numbers of refugees HIAS is bringing in from Iran and Israel is fairly small, perhaps 2,500 annually according to my sources. However, the operation in Israel just started last year and these programs have a tendency to grow if left untended.

And like all groups that have a financial stake in continued mass immigration, HIAS demands that these programs continue forever. HIAS claimed that Trump’s 2017 reduction of the refugee intake of 50,000 is unlawful since Obama had set a ceiling of 110,000 for 2017 [Judge considers ordering President Donald Trump to double 50,000 refugee inflow to the United States, by Neil Munro, Breitbart, March 16, 2017]. The resulting legal brawl, enabled by Leftist judges, has been wild and confusing, although Trump has generally prevailed at the U.S. Supreme Court (9th Circuit once again throws monkey wrench into US Refugee Admissions Program, by Ann Corcoran, Refugee Resettlement Watch, September 19, 2017)

But even Open Borders activists recognize Trump has the legal authority to set the number at zero for 2018. Frank Sharry [Email him] a leading Treason Lobbyist, told a group of activists at the National Partnership for New Americans conference in September 2016 that Trump could “zero the program out” if he chose to. And Congress certainly could zero out the funding of the program if it chose to.

Even some states have taken action to slow or stop the refugee program. Of these efforts, Tennessee has the most hopeful and sound of several state lawsuits aimed at stopping refugee resettlement or at least requiring state acquiescence before resettlement.

With the Tennessee legislature as plaintiff and legal representation by the respected public interest firm The Thomas More Law Center, the prospects for case are good on Tenth Amendment, states’ rights grounds. It’s no surprise the case against the federal program is proceeding without MSM notice. 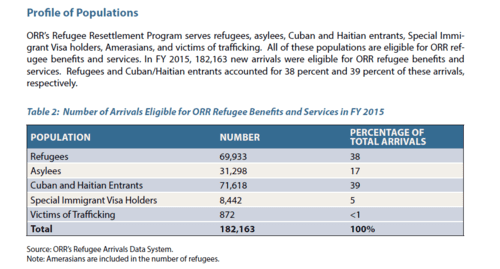 Yet regardless of what the court rules, sometime this September the Trump administration must produce the Presidential Determination which sets the annual refugee by region for FY 2018. This number is a ceiling, not a required quota to be fulfilled.  The President could choose any number, even zero as Sharry fears. He thus theoretically has the ability to at least temporarily obviate the need for a states’ rights lawsuit. This could well put a stop to HIAS’s suit as well [HIAS conference call informative; but appears to be in the dark about FY18 Presidential determination on refugees, by Ann Corcoran, Refugee Resettlement Watch, September 9, 2017].

President Trump has real power right now over HIAS and its associated Leftist bureaucracies and over the whole refugee racket—and he can do it with the stroke of a pen.

Consider what even President Obama did at the end of his term. Just five weeks before the new President Trump tried to impose a temporary hold on the refugee program, Obama peremptorily halted the wet foot/dry foot policy which facilitated mass Cuban migration to the United States as part of the Cuban Haitian Entrant Program. It should be noted that in 2015 more Cubans and Haitians poured into the U.S. through this program than all other refugees [Annual Report to Congress, Office of Refugee Resettlement, Fiscal Year 2015].

President Trump could and should take even more dramatic action. After all, in the wake of Hurricanes Harvey and Irma, we now have American refugees to worry about.

Thomas Allen (email him) describes himself as a recovering refugee worker