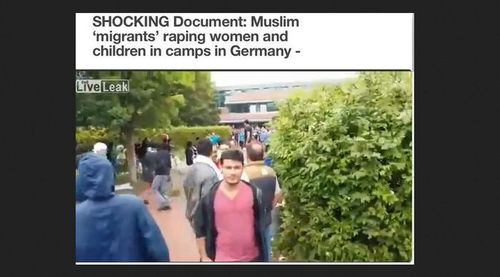 Already, as of three years ago, immigrants, mostly of Muslim descent, were responsible for about 50 percent of the rapes in three Italian cities. [52% of rapes in Rome committed by immigrants, 59% in Milan, 40% in Italy, by Daniel Greenfield, FrontPageMag, December 26, 2012] Now Norway, Sweden, and other nations have also been ravaged by Islamic rapists and even honor killings. [Germany: Muslim father strangled daughter to death in ‘honour killing’ after she shoplifted condoms, by Tom Porter, International Business Times, September 28, 2015]

And the problem will get a lot worse. In 2015, Germany will bring in at least half a million “migrants.” Only now that it’s too late does Germany appear to be regretting its decision to open the gates.

The “migrants” are already running—and ruining—major cities. The police in Hamburg have “capitulated” to Muslim gangs that “outnumber and overwhelm them,” and Muslim rapists, also operating in gangs, are waging sexual jihad. [Polizei kapituliert vor kriminellen Flüchtlinge, Die Welt, November 30, 2014]

The Gatestone Institute, an organization which tracks this kind of crime, has published a shocking report about the tragic fate of the homeland of Schiller, Beethoven and Goethe. More than 1,000 “unaccompanied minor migrants” teem on Hamburg’s streets. Feral gangs use any perceived slight to fight cops and other gangs.

The behavior of these highly delinquent youths towards police officers can be characterized as aggressive, disrespectful and condescending. They are signaling that they are indifferent to police measures…

“The youths quickly become conspicuous, mainly in the domains of pickpocketing or street robbery. They also break into homes and vehicles, but the crimes are often reported as trespassing or vandalism because the youths are just looking for a place to sleep. Shoplifting for obtaining food is commonplace. When they are arrested, they resist and assault [the police officers]. The youths have no respect for state institutions."

Hostile ethnic tribes are now dividing up what used to be German territory. In Stuttgart, Gambian drug dealers run the criminal underground. In Dresden, Algerians, Moroccans and Tunisians control the Wiener Platz, the large public square at the train station. An article at Bild complained these immigrants engage in drug dealing and pickpocketing, “usually with impunity. Police raids on the square have become a game of whack-a-mole, with a never-ending number of migrants replacing those who have been arrested.”

An editorial in the newspaper noted:

“It cannot be that a gang of young men lays claim to an entire area to operate their illegal business. The Wiener Platz is a major entry point to Dresden.... Thousands of people—commuters and tourists—walk along there every day. They should be able to feel safe…

In the ostensible German capital of Berlin, Gatestone reports, “a dozen Arab clans hold reign over the city's criminal underworld.”

The report says the clans, which are dedicated to dealing drugs, robbing banks and burglarizing department stores, run a "parallel justice system" in which they resolve disputes among themselves with mediators from other crime families. If the German state gets involved, the clans use cash payments or threats of violence to influence witnesses.

Gatestone also quotes Der Spiegel, which reports that gangs have commandeered subway trains and created no-go zones similar to those in France. The cops detour around neighborhoods in Berlin or Duisburg because the “migrants” attack them. Non-Germans commit 80 percent of the violent crime in Berlin.

As with the sex slavery scandal in Rotherham, which British authorities kept from the public and were slow to prosecute, German authorities have repeatedly been accused of underreporting the true scale of the crime problem in the country—especially rape.

Sex crimes are now a “nationwide problem,” Gatestone reports. Women and girls at a shelter in Bayernkaserne are “subject to rape and forced prostitution on a daily basis, according to women's rights groups. Although the facility has separate dorm rooms for women, the doors cannot be locked and men control access to the sanitary facilities.”

Women are called “wild game,” but the authorities downplay the crimes “to avoid fuelling anti-immigration sentiments.” And now that Hamburg is seizing property to house the “refugees,” they can set up more rape centers.

The “refugee” pimps charge 10 euros for sex with women “refugees.” The facility is “the biggest brothel in Munich,” and the cops “insist they have no proof that the rapes are taking place, although a police raid on the facility found that guards hired to provide security at the site were trafficking drugs and weapons and were turning a blind eye to the prostitution” [Gewaltorwurfe in Bayernkaserne: Polizei nennet erste Zahlen, TZ, April 17, 2015]

After cataloguing nearly two dozen rapes by “southerners,” Soeren Kern of Gatestone reveals Muslims don’t just rape their Muslim sisters in the refugee facilities. In Mering, where a 16-year-old girl was raped in September, cops have told parents to watch them closely. Women shouldn’t “walk to or from the train station alone because of its proximity to a refugee shelter” [Germany: Migrants’ Rape Epidemic, September 18, 2015]

In the United States, such a warning might be called “profiling,” and the usual suspects would be calling for the police chief to be fired. In Germany, the moral responsibility is reversed, but any wrongdoing is still held to be the fault of white people, as German girls are told to cover up lest they “overwhelm” Muslim boys by showing too much skin.

It’s not as all of this couldn’t have been predicted. Angela Merkel had only to look north to Sweden, where the Muslim rape wave is 40 years in the making.

And let us not forget what a Norwegian television station reported in 2011: Immigrants committed 100 percent of the rapes in Oslo. And, just like German politicians who think Muslims are “bothering [women] without realizing it,” a lady police chief in Oslo said those rapists need “understanding.” They just don’t understand, apparently, that in the West, we don’t just take the women we want.

But Muslims do, as one near victim recalled. A Moroccan landlord let himself into her apartment, took off his pants and walked into her bedroom, a “stupid ‘entitled’ grin on his face.” More recently, this witness saw a blonde woman jogging near some Muslims. They harassed her, “blocking her way, shouting, grabbing their genitals” [Europe’s rape epidemic: Western women will be sacrificed at the altar of mass migration, by Anne-Marie Waters, Breitbart, October 6, 2015]

If that’s not bad enough, there’s this. Prosecutors in Stockholm did not file a deportation order against a Somali rapist because he was too dangerous to the women back home! Swedish women, apparently, must sacrifice their safety, and submit to sexual jihad.

At least two of the insanity’s enablers have paid the price of importing murderous, rape-happy Muslims. In Dresden, a gang of cutthroats stabbed an open borders activist. A Sudanese bunch also gang-raped a woman at a refugee camp on the French-Italian border, but she kept quiet about it, under pressure from other leftists, so the story wouldn’t hurt the “cause” of the “migrants.”

That’s really what this is about. The mindless repetition of slogans such as “refugees welcome” isn’t about compassion. It’s about hatred for Europe.

And even now that the horrible truth is becoming clear to the people, the Main Stream Media keeps pushing the Narrative, telling lachrymose tales of “migrant” woe. The MSM is even complaining about nature not being welcoming enough to Muslims, with The New York Times mourning, “Winter Poses New Danger for Migrants”. [by Rick Lyman, October 18, 2015].

Too bad our MSM won’t tell us about the “new danger” the migrants pose to European women.

Eugene Gant [email him] no longer lives in Baltimore.