On LBJ And Vietnam 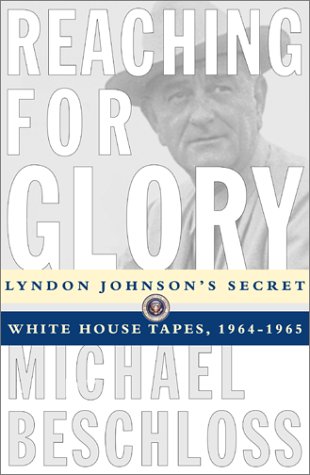 “Reaching for Glory” picks up where Beschloss' first book about Johnson, “Taking Charge,” left off.

For anyone who lived through the turbulent years of Johnson's presidency, the two books are essential reading.

In “Reaching for Glory,” Beschloss takes us through Johnson's landslide victory by 16 million votes over Arizona Republican Sen. Barry Goldwater, the Walter Jenkins sex scandal, the civil rights march in Selma, Ala., and the voter rights and Medicare congressional victories.

But most of all “Reaching for Glory” is an inside, step-by-step look at how Johnson took the nation into Vietnam. While reassuring the public that victory in Vietnam was right around the corner, Johnson, in his recorded private telephone conversations, stated over and over that he knew that defeat was inevitable.

In conversations with Secretary of Defense Robert McNamara and Sen. Richard Russell, D-Ga., chairman of the Armed Services Committee, Johnson confirmed that Vietnam boxed him in.

As early as February 1965, Johnson, in reference to his “Rolling Thunder” air attacks on North Vietnam, said, “Now we're off to bombing these people. We're over that hurdle. I don't think anything is going to be as bad as losing and I don't see any way of winning.”

Lady Bird Johnson, whose tape-recorded diaries Beschloss also gives us access to, wrote on March 7, 1965, “In talking about Vietnam, Lyndon summed it up quite simply—I can't get out and I can't finish it with what I got. And I don't know what the hell to do.”

In 1964, Russell gave Johnson two excellent ways out. Accurately predicting that Vietnam was “just one of those places where you can't win” and that Vietnam would be “Korea on a much bigger scale, the most expensive venture this country ever went into,” Russell recommended that Johnson install a Vietnamese president with instructions to tell us to get out.

And later Russell suggested that Johnson simply declare victory in Vietnam—without explanation—and leave. But Johnson's failure to take either suggestion seriously shows that he underestimated the challenge in Vietnam while giving too much emphasis to earlier commitments to South Vietnam made by Presidents Eisenhower and Kennedy.

The point of no return for Johnson came on Thursday, June 10, 1965. Gen. William Westmoreland cabled McNamara from Saigon that he needed 41,000 more troops immediately and 52,000 more within the next few weeks. Westmoreland's request forced the issue. And Johnson, unfortunately, took the wrong path.

Although the “doves” like Sen. William Fulbright, D-Ark., exerted pressure not to send additional troops, Johnson gave into the “hawks.” From that moment on, the there was no turning back.

In addition to the unfolding disaster that was Vietnam, readers get a close look at Johnson's mindset.

Johnson was anxiety wracked. Knowing he couldn't win in Vietnam, Johnson saw plots against him among friends and foes in Congress. And like Richard Nixon, Johnson was certain that the media had it in for him.

In Johnson's eyes, Bobby Kennedy would use his new position as a New York senator to launch his presidential campaign in 1968. And, Johnson feared, Kennedy would enlist his influential media friends to play up the angle that LBJ only won in 1964 because he was the lesser of the two evils in the race against Goldwater.

To Johnson, congressional leaders such as Sens. Wayne Morse, D-Ore., and Fulbright who opposed his Vietnam policy were aiding and abetting the Communists.

Sections of “Reaching for Glory” have intriguing looks at Johnson's relationship with Jacqueline Kennedy. Early in the book, Johnson frequently calls Jackie to see how she's faring and to offer his continued support as she makes the transition into private life.

Johnson repeatedly tells Jackie that he loves her. In one somewhat odd exchange, LBJ asks Jackie to be sure to let Caroline and John-John know that he “wants to be their daddy.”

Regarding the Jenkins affair, Johnson demonstrated the naiveté of the period about homosexuality. LBJ simply cannot believe that Jenkins, a devout Catholic, married with six children, could be involved in trysts in the basement bathroom at the YMCA. Over and over again, Johnson insists that Jenkins must have suffered a “nervous breakdown.”

The one figure in “Reaching for Glory” who comes through as a shining star is Lady Bird.

Through her diary entries, we can chart Lady Bird's loving concern for her husband as he fought to fend off his demons. LBJ knew that the war, the campus and ghetto riots and the divided Congress would overshadow his domestic triumphs.

And Johnson correctly sensed that because of his failures in Vietnam, history would record him as a presidential failure.