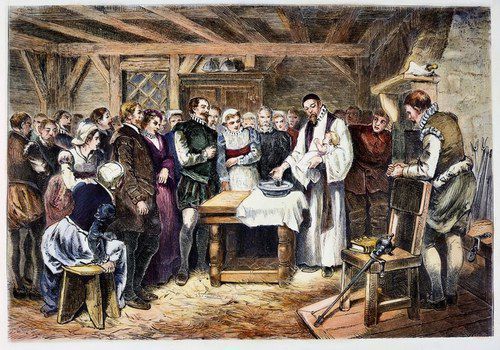 At the top of the page you'll see link that says Why VDARE.COM / The White Doe? It gives some of the reasons why Peter Brimelow decided to name this site after Virginia Dare, the first English child to be born in the New World, who was born on August 18, 1587 – 429 years ago today.

We've been meaning to do more on the subject of Virginia Dare, since it seems to annoy and confuse our critics. In 2002, Tamar Jacoby wrote an attack on immigration reformers in Commentary. Here's what she said about Virginia Dare, and our reply at the time:

[Jacoby:] Virginia Dare is thought to have eventually married into a local Indian tribe, or to have been killed by it—almost equally unfortunate possibilities in the minds of VDARE's writers, who make no secret of their concern about the way America's original Anglo-Saxon stock is being transformed by immigration.

[Us:] If VDARE.com did champion what David Hackett Fisher called "Albion's Seed" in this way, it would, after all, merely make us the Commentary magazine of the "Anglo-Saxon" minority. But in fact we have posted nothing to justify this description. If Tamar had read our "Why VDARE.com/ The White Doe" – which she clearly has not, because she misreports the Virginia Dare story – she would have seen that we satirize the miscegenation canard by posting a picture of Heather Locklear. The case against current immigration policy is a very broad one; it is all too typical for New York intellectuals to read into it only their own ethnocentric preoccupations].

I probably should have said more about this when we answered Jacoby's Commentary's attack on VDARE.COM. When she says "almost equally unfortunate possibilities in the minds of VDARE's writers," she's probably confusing VDARE.COM's editorial collective with the John Wayne character, Ethan Edwards, in The Searchers, who really hates Indians, and thinks that his niece, after years of living with the Comanche, may be better off dead.

In fact some of my best friends are Indians. And no one in my family has been kidnapped or pointlessly slaughtered by Indians since 1885, so I've gotten over it.

But really, though all we have is legends, we're talking about a girl who hasn't been seen alive since she was three. Why wouldn't we be horrified at the idea of a girl being kidnapped at the age of three from a civilized family and raised by an Indian tribe? Why wasn't Tamar Jacoby horrified by that?

Virginia Dare was also mentioned in a Deutschebank Economic report that we discussed here, [PDF] but the author, Mieczyslaw Karczmar [Pronounced roughly Mee-etch-i-slav Kartch-mar], made so many of the same mistakes that Tamar Jacoby did, that I assume he was just, er, scalping her story.

"VDare is named after Virginia Dare, the first English child born in America who was kidnapped as an infant and never seen again."

Once again, we don't know; the whole colony just vanished as if it had never been.

Keillor insisted on calling the Indians "Native Americans," which many people, including some Indians, find annoying. That means that he misses the main point about Virginia Dare: that she was the first Native American - as the term American was understood until recently.

Indians were not the founders of the American nation. They did their warrior-like best to prevent it from being founded.

Today, it seems that there are people who want that American nation to end. That is, they want Americans, both colonial stock and the immigrants who subsequently assimilated with them, to be a minority in America. And that's what Virginia Dare is the symbol of—the beginning, and possibly the end of the historical American nation.

That end doesn't have to happen. Americans can get control of their destiny if they'll fight back. All that's need is the right spirit.

Ethan Edwards, in The Searchers, was a driven man, and it almost destroyed him. But whenever anyone suggested that he might surrender, or give up the search, he just kept saying "That'll be the day!"

So if you see a protester carrying a sign saying "We are indigenous! The only owners of this continent!" remember that you're indigenous, too - and say, in your best John Wayne voice: "That'll be the day!"

(Nick Gillespie, editor at Reason magazine, doesn't get it.)

The New World, Virginia Dare, And The Historical American Nation

(Steve Sailer explains what Hollywood did to Pocahontas; and to the colonists who would be the heroes of the movie if Hollywood weren't so PC.)

The Virginia Dare food company's explanation of why they picked her: Virginia Dare, A Legendary Symbol Of Purity

Fort Raleigh National Historic Site: this is where Roosevelt saw the play, The Lost Colony, still performed there every year.

The Lost Colony": A Cure for Depression? (The National Park service's take on its play)

A statue of Virginia Dare, in the Elizabethan Gardens on the North Carolina Coast.

Marcus Epstein atop a fortunate coincidence.