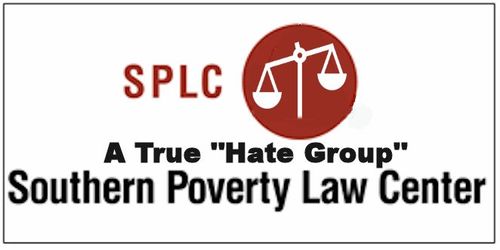 The Fulford FIle | SPLC's Point And Splutter Attack On Ann Coulter (And VDARE.com) Par For The Sinister Course 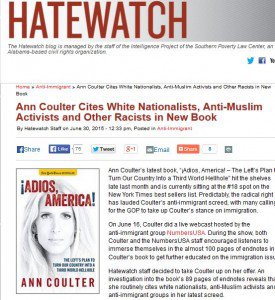 Here's the latest targeted Point-And-Splutter attack from the SPLC:

On June 16, Coulter did a live webcast hosted by the anti-immigrant [sic] group NumbersUSA. During the show, both Coulter and the NumbersUSA staff encouraged listeners to immerse themselves in the almost 100 pages of endnotes in Coulter’s book to get further educated on the immigration issue.

Hatewatch staff decided to take Coulter up on her offer. An investigation into the book’s 89 pages of endnotes reveals that she routinely cites white nationalists, anti-Muslim activists and anti-immigrant groups in her latest screed.

This includes, according to the SPLC, "Jason Richwine—Disgraced Former Heritage Foundation Senior Policy Analyst ". Actually, as we've shown, it's not Richwine who was disgraced by that incident—he did nothing more disgraceful than get a Harvard Ph.D. degree—but Jim DeMint and the  Heritage Foundation.

(But it does amuse us to see that all CIS head Mark Krikorian’s Politically Correct triangulation has done him no good).

Then there's Peter Brimelow (author of Alien Nation and Time To Rethink Immigration) and we Happy Few here at VDARE.com, who make one brief appearance in the book, in the footnotes to Chapter 16, when an article by Peter Brimelow and Ed Rubenstein on California Hispanics is cited.

In Chapter 16 of her book, Coulter cites a blog by white nationalist Peter Brimelow written on his racist website VDARE. In her NumbersUSA webcast earlier this month, Coulter praised Brimelow for his book, “Alien Nation,” published in 1995. Brimelow’s book argued that America is historically white-dominated and should stay that way and described the role of race as “elemental, absolute, fundamental.” Though most of the content on VDARE focuses on immigration, Brimelow also gives a platform to a number of other haters including Kevin MacDonald, one of the most important anti-Semites in America and Jared Taylor, thought of as one of the premier white nationalist ideologues of the past quarter century. Many of Coulter’s syndicated columns are also housed on the VDARE site.

Note that the SPLC does not mention that Brimelow and Rubenstein’s scandalous article was simply a detailed analysis of California’s demography, concluding the state remains winnable for a GOP candidate who ran as a National Conservative.

But let's get into what's wrong with what the SPLC did say. We spend a lot of time and effort in putting citations into articles. We cite title, author, publication, name, and date, of articles we quote, and if at all possible, we put live links into them.

We do this on a shoestring budget, too. (Send us money!) The $PLC has a fortune, and it doesn’t do any of it. Every one of those links in that attack goes back to its own site. Instead of linking to Peter Brimelow's archive, it links to an attack on him, and the same goes for Jared Taylor, Kevin MacDonald, and Ann Coulter's syndicated columns.

The SPLC says that Peter Brimelow "described the role of race as 'elemental, absolute, fundamental.'" But it doesn't say where he said it.

If you search for “elemental, absolute, fundamental,” in Google, you get a lot of people quoting the phrase, point-and-splutter fashion, including Howard University Professor Frank Wu, in his book Yellow, but few of them cite it, or its context. It's from Alien Nation, p. 125, and I quoted it myself in an article here on secession:

In modern times, there has been a lot of seductive murmuring about internationalism, united nations, new world orders, and so on. But, meanwhile, the role of ethnicity and race has proved to be elemental—absolute—fundamental. Look at the record, working back from the present….

Peter was talking about the breakup of Czechoslovakia. (Also Malaysia, the Soviet Union, Yugoslavia, Lebanon, Cyprus, Pakistan, and Eritrea. See here for the full list.)

As for the business of Ann’s one (1) VDARE.com quote—screenshot at right, from my iPhone—here's the context: 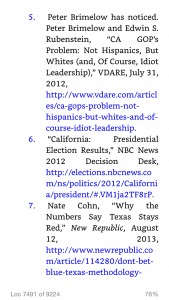 With Democrats always gassing on about how Hispanics are going to turn Texas blue, as happened to California, no one seems to have noticed that Texas already has more Hispanics than California.5

As usual, this is much ado about nothing. However, it illustrates the method of the SPLC's Guilt-By-Association and Guilt-By-Non-Association tactics.

In Michelle Malkin's article about the latest black church fire hoax, she pointed out that the "stated mission" of the Southern Poverty Law Center  is "to 'destroy' its political opponents".

The link on "stated mission"—added by me— goes to the actual mission statement of the SPLC, which includes this:

"We track the activities of hate groups and domestic terrorists across America, and we launch innovative lawsuits that seek to destroy networks of radical extremists."

Its method of actually destroying people it disapproves of is well-funded lawsuits. Here's John Derbyshire, writing on one such destruction, 15 years ago in National Review

Another instance showed up last week in Idaho, when the leader of the Aryan Nations white-supremacist group was ordered to pay $5.1 million in punitive and compensatory damages to two people who were run off the road and shot at by guards outside the AN compound. The guards, who had mistaken the plaintiffs' truck backfire for a gunshot, are currently serving stiff prison sentences for the assault (in which nobody was seriously hurt — this is one of those million-dollars-per-bruise judgments). The civil lawsuit was brought on the plaintiff's behalf by the Southern Poverty Law Center, a far-left activist group, explicitly as a means of destroying Aryan Nations. Now, the AN folk are a bunch of yahoos; but when they break the law, the law can deal with them, as is proved by the incarceration of the guards in this case. To bring a civil action with the expressed aim of bankrupting AN is an act of plain malice, and ought not be countenanced by a court system committed to our ancient liberties.

And the SPLC doesn't only mean to "destroy" the Aryan Nations—it considers the following groups beyond the pale: the Federation For American Immigration Reform, the Center for Immigration Studies, and the Family Research Council, which has endured at least one SPLC-inspired criminal attack.

What the SPLC is saying here is that it’s declared certain people dead, including Ann Coulter, and it wants to know why they won't lie down.

About twice a year for nearly a decade, I have upset the little darlings with some public statement, and yet they manage to summon fresh outrage for each new offense. Each time they think I can’t “sink any lower”—I proceed to do so! And by the way, if they’re going to keep using the tired formulation “This time, she’s gone too far!”—can I get an admission that the last sixteen times were, therefore, not “too far”?

The SPLC's technique of declaring people or groups unclean, and the declaring others unclean for associating with them reminds of a quack doctor I heard of years ago: Dr. Hulda Regehr Clark, who claimed to be able to cure AIDS and cancer with glowing light machine that she'd shine on people. Her success in curing actual sick people was as limited as the SPLC's success in helping ordinary black people in Alabama—who are being displaced by immigrants with the help of the SPLC.

But Dr. Clark had another glowing light machine she would point at you—this one was diagnostic. And she could declare you to be infected with HIV, the way the SPLC declares people a hate group, and then she would point the other machine at you and declare you cured. (Like the SPLC, she didn't do this for free.) The people she had declared sick were successfully declared cured.

She had legal troubles—she wasn't a real doctor—and set up a clinic in Mexico, like a number of quacks. But she was so egregious that the Mexican authorities shut her down, and eventually she died of a disease that a real doctor would have sought help for [The Bizarre Claims of Hulda Clark, Stephen Barrett, M.D., QuackWatch.com, October 23, 2009]

The SPLC has the same strange methods. But instead of intervening, the authorities take it seriously.