Attorney General Jeff Sessions and HHS Secretary Tom Price announced indictments of 412 Medicare/Medicare cheats across 41 federal districts on July 13 [Documents and resources from the July 13, 2017 National Health Care Fraud Takedown Press Conference, Department of Justice, July 13, 2017]. And this doesn’t represent all Federal Districts so there will be more to come.

It’s a significant step in draining the swamp of Medicare leeches, and as VDARE readers may expect, many of these leeches are immigrants.

Recently, Ann Coulter gave us a glimpse at the immigrant names among accused Medicare fraudsters in the Detroit area.

As @realDonaldTrump said, some immigrants work their asses off (stealing from the govt & destroying American lives). https://t.co/BPKknF1pIw

VDARE.com has covered the nexus between crooked medical minorities/ immigrants and the collapse of professional standards over the past few years. Here I will take a deeper dive into the Florida and some of the New York City cases. Who is involved in this and how does this happen?

The demographics of the defendants and local immigrant populations mirror each other, as we would expect. Based on the names in the list of indictments in the Southern District of Florida (i.e. Miami and environs) in the list provided by the Department of Justice, the list of 28 defendants contains only two non-Hispanics. In contrast, Middle Florida rendered just 5 defendants, all appear to be white.

Meanwhile, the Eastern District of New York, which contains parts of New York City, produced six defendants, including one Indian, one Chinese person, and, from the last names, apparently four Russian Jews. (Someone is just not looking hard enough there, but it’s a start.)

The amounts stolen are not trivial. Here’s back of the envelope tally of claimed fraud amounts for the NYC defendants.

How did this get so out of control? One graphic tells the story [2017 Health Care Fraud Takedown: Daily Stat Breakdown, Department of Justice, July 12, 2017. 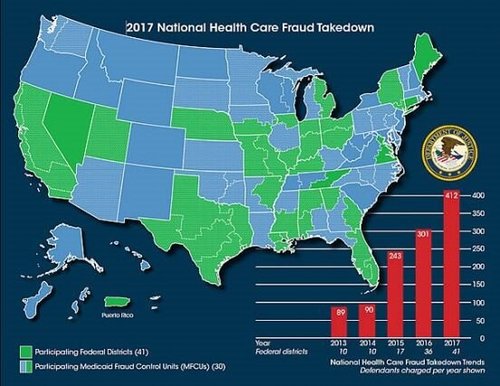 That sounds like they were responding to a growing problem—until you consider that the Trump Administration has already indicted 412 in six months. At that rate, this Administration will bring charges against more people in one year than the total charges brought by Obama in four years—at 824 (my estimate) it will be twice Obama’s cumulative total of 723.

Quite obviously, the Obama Administration was not keen on riding herd, especially when doing so might mean confronting the myth of virtuous hard-working minority immigrants making it in America.[Fewer prosecuted in benefits program fraud, By Brad Heath, USA TODAY, June 28, 2011.]After all, Obama once proudly proclaimed himself a Desi.

They don’t need to work all that hard, though. Medicare is like a safe made from balsa wood. It is so weak it invites pilferage.

Medicare is a federally-funded program administered by the Department of Health and Human Services (HHS) to provide medical services to the infirm, elderly and poor. It does this by providing payment for health care services. It provides no services itself. Instead, the money passes to the Centers for Medicare & Medicaid Services (CMS), which also provides no actual services. Instead, it administers the program.

For example, if one was dealing with treatment for those confined to their home, CMS would contract with various Home Health Agencies (HHAs). These are bound to CMS by regulations, codes and payment methodologies so CMS can supposedly track what’s being provided and to whom.

The HHAs in turn contract with lesser providers like nursing services, equipment vendors, etc. This is where the lion’s share of the cheating goes on, as crooked agencies can use vendors to inflate payments and hide the money trail.

Since this is pretty complicated, CMS regularly contracts with Benefit Administrators who provide oversight of everyday spending and practices. They are supposed to be gatekeepers and quality control monitors.

Yet this is an imperfect system. Medicare is like a great bag of coins with a hole in the bottom. Everyone catches some while passing the overflow down to the next level. The owner of the bag can only hope that the coins at the bottom are well spent.

Reading the complaints filed by DOJ, it seems obvious little is being done at the provider level to establish even the existence of patients or services. The ratio of paper pushers and paper creators to inspectors is weighted toward the thieves. There are not enough undercover inspections and not enough operational auditing.

Also, if Benefit Coordinators were on the job, how could the scams go on for multiple years? They either aren’t doing the job or are in on the take. It’s difficult to see another plausible answer. This is an ideal scenario for low-trust foreigners with audacity and a bit of creativity.

The financial status of the fraudsters doesn’t seem to be investigated with any rigor. There are more red flags in the operating procedures of these defendants than at an old Red Square May Day parade.

For instance, in the Eastern District of New York, Dr. Xiailiang Zhang seems to have walked away with over $7 million, billing the taxpayers for back rubs and hot packs. That’s according to a cooperating witness and an undercover Inspector General Investigator as cited in the complaint. He piled up this fortune over a period of three years. How carefully are these providers monitored if they can get away with this for years at a time?

Why are so many immigrants involved? My experience tells me there are two reasons:

This helps in recruiting confederates and in manning schemes. Everyone gets a cut and landsmen are less likely to turn on one another. There are also many local criminals who will eagerly participate for a few bucks. All manner of welfare and insurance fraud already goes on where foreign MD’s deploy their “services.” A small kickback or gift is enough to get a meth-head to enroll as your phantom patient. (Try finding him to testify, by the way).

Those praying on these losers in the American lottery are often not even Americans. But Americans are still the ones paying for it, both in terms of our tax dollars and in the collapse of our formerly First World society.

And until we can come to grips with this problem, fixing health care will remain an impossibility.

Thomas O. Meehan (email him) is a free-lance writer and former government Senior Research Analyst and Inspector. A refugee from the People’s Republic of New Jersey, he now lives in Bucks County PA. He blogs from Odysseus On The Rocks.