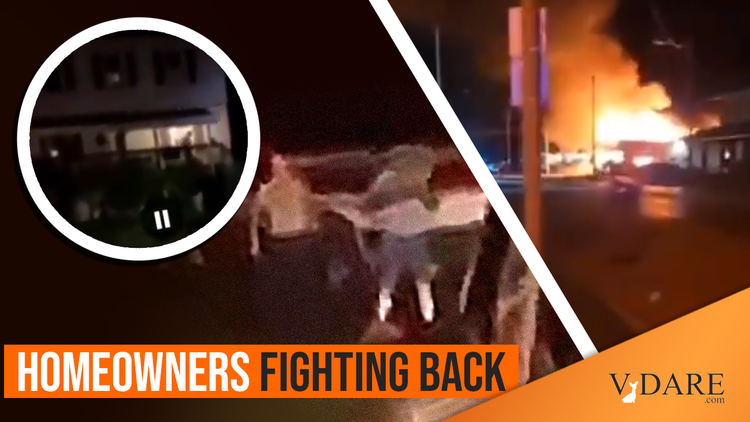 Earlier, 2017: "It Will Come To Blood"—Reflections On The Left's Anti-Trump Inauguration Tantrum and It Has Come To Blood: Riots Are Getting More Dangerous Every Day

In his 2017 response to the Inauguration Riots, Peter Brimelow wrote:

The leaders of what I have called the nation of “Anti-America” have always been absolutely conscious that there is still time for the Historic Nation of America to unite, to throw off what from a demographic point of view is undeniably a Minority Occupation Government, and to stop its Electing A New People through immigration policy. And they are absolutely determined to prevent the Historic Nation of America from uniting—by “any means necessary.”

But to their horror, it seems to be happening anyway. Hence their anti-Trump tantrum.

We’re facing what was called in the case of the Civil War an irrepressible conflict.

Recently, it has been coming to blood (and fire!) as blacks riot in the cities, but now they are marching into the suburbs and rural areas and attacking there. But people are fighting back.

Dramatic video has emerged from the latest incident involving Black Lives Matter protesters entering a residential neighborhood — a trend which is increasingly resulting in worried and anxious homeowners brandishing guns, as happened with the most famous such incident of the gun-toting McCloskey's defending their mansion in St. Louis over a month ago. Rarely have such tense encounters resulted in shootings, but that appears to have changed.

Late Monday night a homeowner in a suburban neighborhood of the small rural town of Schellsburg in Bedford County, Pennsylvania, reportedly fired upon Black Lives Matter marchers as they entered a residential area.

Social media video appeared to show at least two or possibly three local men confronting the marchers, telling them to exit the neighborhood, after which shots ring out. Local media confirmed a person from among the BLM activists was indeed wounded by gunshot, and transported to Conemaugh Memorial Medical Center in Johnstown around 12:15 a.m. Tuesday.

Schellsburg has a population of a little over 330 and lies in the southern part of Pennsylvania. Like with many countryside areas and farm and ranch communities, it's more than likely that significant numbers of the residents are gun owners.

With the increasing lawlessness in the wake of George Floyd's killing by police that resulted in riots, looting, and mayhem across multiple major US cities, it appears more and more Americans especially in rural areas are interpreting any level of BLM or Antifa activity as a direct threat to their property and lives in a dangerous situation which only looks to escalate. [More ]

This is a more or less predictable reaction, predicted by Peter Brimelow among others.

Here are couple of Tweets from Jesse Kelly in Texas on the subject.

PRO TIP: Looting and vandalizing people’s stuff is dangerous. It can lead to serious injuries, or even death.

Told y’all what was gonna happen when you tried that in the suburbs.

Wisconsin ain’t Atlanta. Keep your degeneracy in your own area.

Kelly is talking, not about the Pennsylvania incident, but about 17-year-old Kyle Rittenhouse, who shot (in self-defense) some armed rioters.

The MSM hates people who defend themselves from criminals, and will smear them by reflex. The case of the McCloskeys, who spoke at the RNC, but may still be tried for some kind of offence related their self defence is only the most recent. It goes back well before George Zimmerman to Bernard Goetz and before.

Rittenhouse has been arrested: Armed Civilian Tried to Stop Rioters From Destroying a Kenosha Business. Now He's Been Arrested By Tyler O'Neil, Aug 26, 2020. It's quite possible he won't be convicted.

The Kenosha police department is not charging the cop who shot Jacob Blake, because it was self-defense. Blake, a fighting-mad criminal, wanted for sexual assault, was clearly reaching for a knife.

- Rusten Sheskey, a 7-year veteran of the Dept.
- Taser was ineffective
- Blake possessed a knife
- There is no bodycam footage
- No criminal charges as of now

But there's going to be more of this.