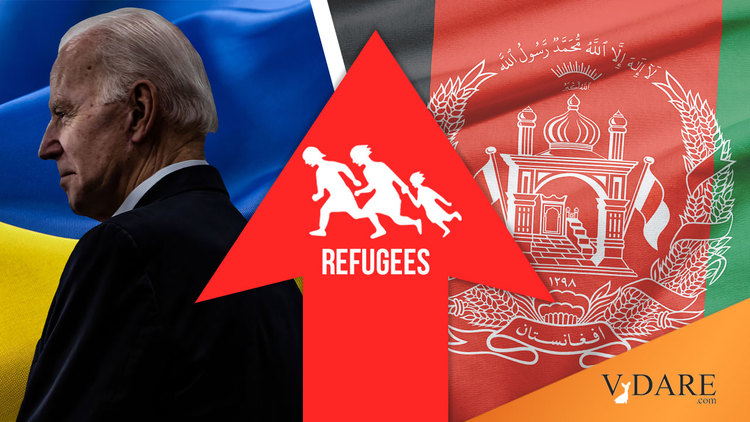 Forget Biden’s Promise To Import 125K Refugees. The Real Figure Could Be Double That

You’ll find something a little funny about Let’s Go Brandon’s refugee math if you get out the adding machine. Biden campaigned on importing 125,000 refugees. But he recently vowed to accept 100,000 from Ukraine. He also promised to import 100,000 Afghans when the U.S. ended its 20-year nation-building endeavor in the Graveyard of Empires. I can’t do Common Core math, but something doesn’t add up. If Biden is to keep all these promises, he’ll dump at least 225,000 refugees on us, and perhaps even more. Treason Lobbyists are, undoubtedly, overjoyed. Immigration patriots and the Historic American Nation, victims of The Great Replacement … not so much.

Biden’s refugee campaign promise, which appears in his fiscal 2023 budget proposal, was a whopping 733 percent more than Trump permitted to enter the country during his final year. More brown people from the Third World were, the regime said Biden made good on the promise, “critical to U.S. foreign policy interests and national security objectives” [The Biden administration will raise the cap on refugee admissions to 125,000, by Michael Shear, The New York Times, September 20, 2021].

That’s laughable, but that aside, events since then have blown that cap off the top of the bottle.

The Daily Mail reported this week that hundreds of Ukrainians await entry into the United States as refugees, apropos of Biden’s crazy promise to bring in 100,000 [Hundreds of Ukrainian refugees including dozens of children who have fled Putin's bloody war are crammed into temporary camps at the Mexico border waiting to get into America after Biden promised to take in 100,000, by Elmira Tantarova, April 5, 2022]. Some 400 Ukrainians are in Tijuana alone.

As for the 100,000 Afghans who began heading to our fruited plains after his costly and disastrous pullout from Afghanistan, many if not most are here now [Afghan Refugees in the U.S.: How They’re Vetted, Where They’re Going and How to Help, by Michelle Hackman, The Wall Street Journal, January 21, 2022].

Legally speaking, many aren’t refugees because they landed here on special immigrant visas because they worked for the U.S. military or government. Nonetheless, as a practical matter, they are refugees. And it’s worth observing that many who fled the country weren’t vetted. Their legal status is unclear.

Total refugees and others incoming between Ukraine and Afghanistan alone: 200,000. Those two groups consume all of Biden’s refugee commitment, plus 75,000. Now let’s leave the Afghans out of the equation. The 100,000 Ukrainians alone will consume 80 percent of the total Biden wants to admit.

My guess for the near future: Treason Lobbyists will persuade Biden that we can’t let a sudden influx of war refugees from Ukraine box out those who expected to enter the country under his campaign vow. So he’ll saddle Americans with at least 225,000 refugees — 100,000 Ukrainians plus the original 125,000 — before the calendar if not fiscal year’s end. That will keep the campaign promise.

These figures do not, of course, count the almost 320,000 illegal aliens whom Biden freed October through February.