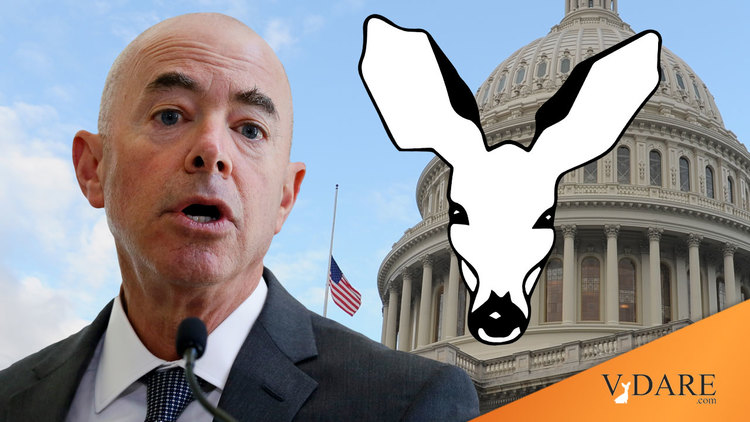 At long last, it appears the GOP might finally have screwed up the courage to fight the Biden Regime’s Border Treason. In a long letter to Homeland Security chief Alejandro Mayorkas, 130 Republicans told him he is purposely not enforcing U.S. immigration law and demanded answers to several questions [4.24 Letter to Sec Mayorkas, Scribd, April 25, 2022]. From the tone of the letter, and House Speaker Kevin McCarthy’s comments at a news conference, it appears that the party might impeach him if and when they take back Capitol Hill.

The first paragraph is a brutal punch that accuses Mayorkas of purposely wrecking border security.

His moves to “dismantle the security” of the border and “disregard for the enforcement” of the law have “willingly endangered American citizens and undermined the rule of law and our nation’s sovereignty,” they wrote:

Your failure to secure the border and enforce the laws passed by Congress raises grave questions about your suitability for office.

But beyond accusing him of willfully violating federal law despite court orders to obey it, the congressmen also targeted Mayorkas for not enforcing the same two laws VDARE discussed last week, citing Andrew Arthur of the Center for Immigration Studies.

Section 235 of the Immigration and Nationality Act requires immigration authorities to detain illegals until they are either deported or receive permission to stay in the country. The Secure Fence Act of 2006 requires the DHS chief to maintain “operational control” of the border. Mayorkas, of course, is doing neither, and instead brazenly breaking the law.

Visiting Eagle Pass, Texas, McCarthy, one of the letter’s signers, suggested that the GOP might impeach Mayorkas. “This is his moment in time to do his job but at any time if someone is derelict in their job, there is always the option of impeaching somebody, but right now he’s got 30 days” [McCarthy floats impeachment of Biden border chief Mayorkas, by Madeleine Hubbard, Just The News, April 25, 2022].

The regime had planned to stop Title 42 expulsions on May 23, but a federal judge kiboshed the idea two days ago.