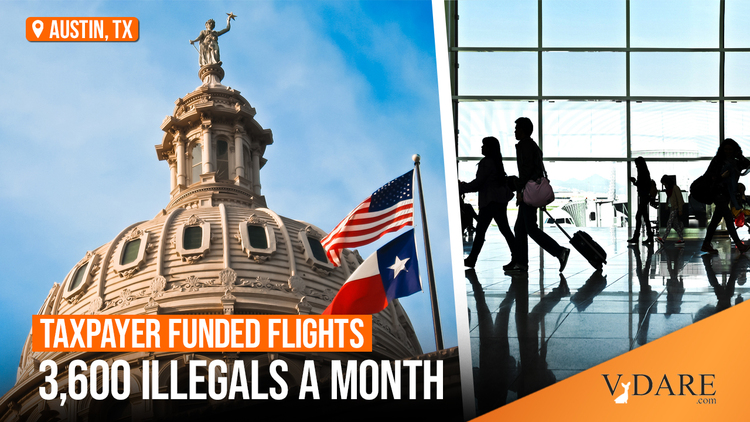 Austin, Texas, is now a staging center for the illegal-alien invasion of the United States because the penniless but seemingly well-fed, well-heeled “migrants” have overwhelmed San Antonio. A transport program that will fly more than 3,000 illegals per month out of Austin–Bergstrom International Airport began last week.

In partnership with @COSAGOV, we are coordinating travel support to help asylum seekers reach their sponsor destinations across the United States in a timely and safe manner.

“It is important to note that the asylum seekers are legally permitted to move throughout the country, and this partnership is designed to ensure their transit is done in a humane and efficient manner,” the city announced [City of Austin to Connect Asylum Seekers with Flights to Sponsor Destinations, AustinTexas.gov, January 13, 2023].

Its goal is to “help asylum seekers be able to reach their sponsor destinations safely and with dignity.”

Translation: Your city will get illegals whether you like it or not, although you probably won’t know it.

The city did not say how much the program will cost, but American taxpayers are on the hook for moving 120 illegals per day, or 3,600 per month:

[T]he City will seek full reimbursement from the federal government, which is currently reimbursing San Antonio and other U.S. cities that are expending resources to assist asylum seekers, will support people whose asylum claims have completed initial processing and who are pre-booked for air travel to connect with flights out of the Austin–Bergstrom International Airport (AUS) as they make their way to their destinations in the United States.

U.S. Customs and Border Protection, which has been turned in a federal Welcome Wagon, and the subversive Catholic Charities play their roles:

Asylum seekers are released by Customs and Border Protection by border cities and transported to San Antonio and other transportation hubs. They need to find their way to their sponsors, many of whom are in distant states.

Catholic Charities of San Antonio will also be providing the City of Austin with a 24/7 phone helpline for assistance in rebooking asylum seekers who have delayed/missed flights.

Since January 2021, when Traitor Joe Biden took office, San Antonio “has served more than 365,000 asylum seekers legally transiting through San Antonio en route to their host city destinations across the country,” the release reported. “In December 2022, San Antonio had a daily average of 1,206 arrivals with some days exceeding over 1,800.”

Biden has been running secret flights, which dump the illegals into unsuspecting towns and cities, for some time.

The Great Replacement flights should remind us that the GOP governors such as Greg Abbott and Ron DeSantis, who have been busing illegals into sanctuary cities, should stop. They made their point.

Continuing to send illegals into sanctuaries to punish Biden and his municipal toadies is aiding the Great Replacement [Busloads of migrants dropped off near Kamala Harris’s home on Christmas Eve, by Giulia Heyward, NPR, December 25, 2022].

What little is left of this country will survive only if those governors provoke a fight with the regime by deporting illegals back across the border with a stern warning not to return.

Doing so would nullify federal control of immigration and provoke the secession crisis the country needs.