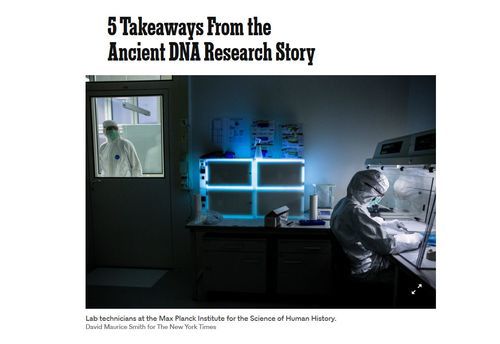 Is The NYT Gearing Up To Watson Geneticist David Reich?

Oddly, the New York Times has published a second article summarizing the message of its long article on David Reich and other Ancient DNA scientists:

In only the past few years, as a new report in The New York Times Magazine describes, this burgeoning science of “paleogenomics” has begun to offer surprising revisions to the story of humanity. But at the same time, this research has generated significant controversy, including among some of the archaeologists, anthropologists and other academics who have collaborated with geneticists on this work.

Here are some key takeaways.

The study of ancient DNA has upended many of our assumptions about prehistoric times.

For decades, it was commonly believed that ancient communities tended to stay in one place — and thus didn’t mix very much with their neighbors.

The idea of “pure” groups with identifiable “origins” has been largely reconsidered.

Many of the new findings say the same thing: that these groups mixed together in the process of great and previously unknown migrations.

For example, ancient DNA research seems to indicate that about 5,000 years ago, when Europe was populated with a mix of hunter-gatherer groups and early farmers, a group of outsiders suddenly arrived — nomadic herders from the Asian steppes — and within a relatively short time their own ancestry became prevalent. Sometimes these prehistoric migrations seemed to result in “admixture” between groups on an even footing. Other times, however, researchers describe population “replacement” or “turnover” — the near-wholesale shift from one predominant ancestry to another. Contemporary Europeans owe a significant amount of their genetic inheritance to the incoming herders.

Oh … what? Uh-oh … OK, the takeaway is to change the name Aryans to Indo-Europeans. Forget all about Aryans.

For peoples around the world today, these new theories about origin and migration can have destabilizing implications. …

Archaeologists have collaborated with geneticists on these academic papers, but many of them now worry that the papers are trafficking in some old, discredited ideas.

Many archaeologists feel as though they’ve been here before. For the first half of the twentieth century, archaeology tended to believe that large migrations of superior peoples shaped the landscape and culture of the ancient world. That idea was easily exploited by nationalists…

In the early 1960s, a new generation of archaeologists came to question these grand historical narratives and the unwarranted assumptions that supported them. They turned away from simplistic stories about the distant past in favor of much more detailed attention to specific societal dynamics. Now, some worry that their geneticist colleagues are making similarly grand claims on the basis of a small number of samples.

As opposed to the reigning Social Constructionist conventional wisdom, which was based on no number of samples, just wishful thinking.

As the Times Magazine’s report notes, the controversy underscores not just a gap in priorities between different academic disciplines but also a conflict between two warring scholarly attitudes: on the one hand, “those bewitched by grand intellectual narratives,” and on the other hand, “those who wearily warn that such adventures rarely end well.”

Because, of course, the social constructionist Old Guard whose fundamental worldview is being proven wrong were never “bewitched” by ideology.