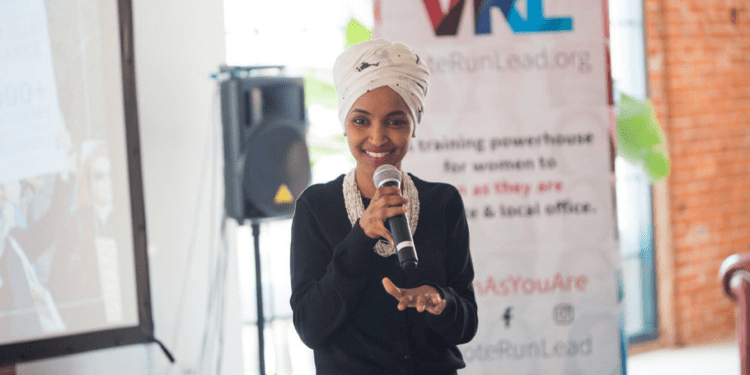 On Wednesday, Tucker Carlson discussed the fascinating case of Ilhan Omar, the Somali-born elected congressional representative from Minnesota. Some might call her a demonstration of how diverse persons can succeed in America. 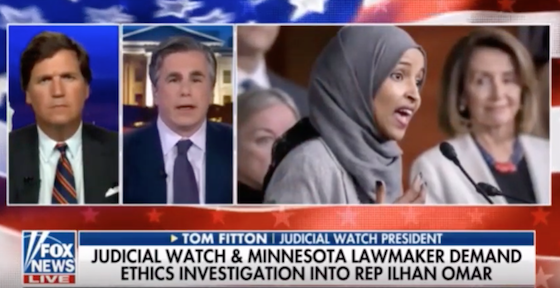 Others might notice Omar’s sketchy past and see a criminal who just hasn’t been prosecuted yet. The charges are not new and have been examined here previously.

Tucker called Omar a lunatic, but a better characterization might be that she is a cultural stew of arrogant sharia-compliant Muslim immigrant who believes she will prevail over the stupid infidels in America. Oh, and political correctness is on her side also, since she is not shy about calling critics Racist, as she did in her recent New York Times opinion piece Ilhan Omar: It Is Not Enough to Condemn Trump’s Racism.

TUCKER CARLSON: In a resurfaced interview from 2018, Ilhan Omar told Al Jazeera that America ought to engage in racial profiling of white men, whom she blamed for, quote, “Most of the deaths within this country.”

ILHAN OMAR: I would say our country should be more fearful of white man across our country because they are actually causing most of the deaths within this country. We should be profiling, monitoring and creating policies to fight the radicalization of white men.

CARLSON: In the same interview, Omar said America shouldn’t worry about young Muslims leaving her state of Minnesota to fight for ISIS or Al-Shabaab. The real — I’m not making this up, I’ve got to pause right here, because we’re not making this up. It’s hard to believe, but we’re actually not, this is real.

Omar said the real concern was the rhetoric of local politicians, which apparently drove these young terrorists into terrorism. In short, Ilhan Omar is a lunatic, an embarrassing blight on American politics, but hopefully, one that will eventually pass.

Recently, the group Judicial Watch filed a formal ethics complaint against Omar. The group requested a full investigation into matters that include potential tax fraud, marriage fraud, and immigration fraud, as well as perjury. Tom Fitton is the President of Judicial Watch, and he joins us tonight. Tom, thanks for coming on. What are you hoping to find from Congresswoman Omar?

And you know, we’ve had Powerline blog, and you’ve had them on talking about their comprehensive investigation. Her left-wing hometown newspaper has basically said these allegations are out there, she hasn’t disproven them, and has raised more questions than answers. And it’s about time for the House Ethics process to begin to work.

Now, I say that knowing that the House Ethics Committee is split evenly between Democrats and Republicans, but the American people are probably going to want the House to make sure that Ms. Omar, who may have committed marriage fraud by marrying her brother, and then we know for sure that she was signing incorrect tax returns. So, the extent of the criminality needs to be explored.

And the House needs to do it. But the Justice Department, the Department of Homeland Security and the IRS need to do something as well. This is — you know, she has been protected from this scandal by the big media for a long time. And you know, we’ve got to lift that protection. She is not above the law, you know, and this isn’t about her crazy socialism and her anti-American statements. This is about whether she just follows the basic rules that other Americans would be subject to severe scrutiny over if they were seen to be breaking them.

CARLSON: Some scrutiny. I mean, she’s credibly accused of coming here to this country under a false identity, marrying her brother. Clearly she lied about it. I’m just going to say that flatly. She lied about it. She said she was married in her faith tradition, she wasn’t. She was married by a Christian Minister.

CARLSON: And then credibly accused of committing perjury and lying about all of it. So, why isn’t the administration just honest with both feet? Because people are afraid to be called racist? Is that what it’s about?

FITTON: You know, I don’t know, maybe the Justice Department is doing an investigation they are not telling us about.

CARLSON: I hope so.

FITTON: But go back to your first point. We’re not even sure Omar is her real name.

FITTON: That’s how crazy this is and you know — and I’ve been doing this for 20 plus years. And this is about the most significant congressional scandal by a member that I’m aware of — you have to go back to Traficant, I think back in Ohio to come up with something so far out.

But in terms of the scope of the potential criminality, this is pretty significant. And the question is that, if this doesn’t go forward, it’s probably going to be because Democrats are protecting her. And so you know, they tell us today at the Mueller hearing, because we know they don’t believe it that no one is above the law. The question for the House Democrats is Ms. Omar above the law?

CARLSON: Because they’ve got a whole bunch of people they believe are above the law. Tom Fitton. Appreciate it. Good to see you tonight.