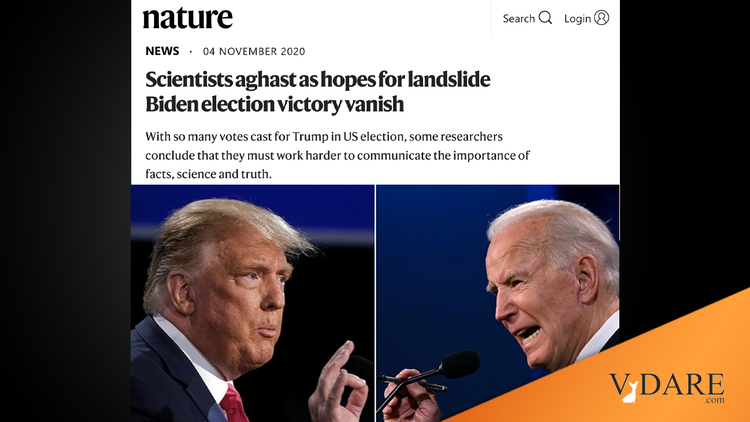 Not From The Babylon Bee: Scientists Aghast As Hopes For Landslide Biden Election Victory Vanish

But from the science journal Nature:

With so many votes cast for Trump in US election, some researchers conclude that they must work harder to communicate the importance of facts, science and truth.

As the possibility of a land-slide victory for US presidential candidate Joe Biden vanished in the wee hours of 4 November, some scientists saw the deadlocked election as a sign of their own failure to communicate the importance of science, evidence and truth to the general population.

“This election is not going to be a decisive national categorical repudiation of Trump, regardless of who wins the presidency,” says James Lindley Wilson, a political scientist who studies elections and democracy at the University of Chicago.

Many researchers supported Biden because of his science-friendly policies — in particular his plans to bring the coronavirus under control and to mitigate climate change — and have recoiled from Republican President Donald Trump’s blatant disregard for evidence and truth during his time in office.

For some researchers, the fact that the election has come down to the wire is evidence that scientists simply aren’t connecting with the general population. Whatever happens, says Naomi Oreskes, a science historian at Harvard University in Cambridge, Massachusetts, “we have a lot of work ahead of us”.

The tone of this article is exactly the same as that of my 1992 parody of science journalism “Report Cites Bias Against Women in Drug Rackets.”

The more things change, the more they stay the same.