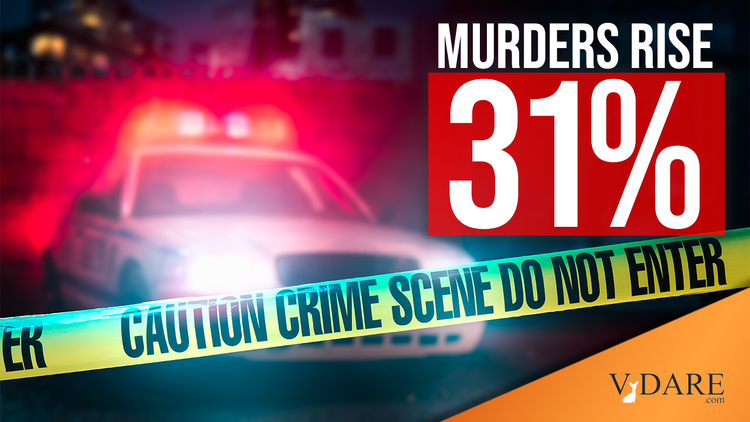 NYT: Murder Rate Rose 31% More from May to June vs. Last Year, But Only Trump Thinks That Had Anything to Do with the Peaceful Protests

In the Wake of Covid-19 Lockdowns, a Troubling Surge in Homicides

… The onset of warm weather nearly always brings with it a spike in violent crime, but with much of the country emerging from weeks of lockdown from the coronavirus, the increase this year has been much steeper than usual.

Across 20 major cities, the murder rate at the end of June was on average 37 percent higher than it was at the end of May, according to Richard Rosenfeld, a criminologist at the University of Missouri-St. Louis. The increase over the same period a year ago was just 6 percent.

Did anything happen in late May, such as, oh, say, the death in police custody of George Floyd on Memorial Day, setting off the celebrated Peaceful Protests?

… Nationally, crime remains at or near a generational low, and experts caution against drawing conclusions from just a few months.

But President Trump has used the rising homicide numbers to paint Democratic-led cities as out of control and to blame protests against police brutality that broke out after the killing of George Floyd in Minneapolis in late May. …

Criminologists dispute the president’s suggestion that the increase is tied to any pullback by the police in response to criticism or defunding efforts, and fluctuations in the crime rate are notoriously hard to explain. In many cities, the murder rate was on the rise before the pandemic, and a steep decline in arrests coincided with the start of social distancing, as measured by mobile phone records, according to a database compiled by David Abrams, an economist at the University of Pennsylvania law school.

Some experts have pointed to the pandemic’s destabilization of community institutions, or theorized that people with a propensity for violence may have been less likely to heed stay-at-home orders. But in city after city, crime overall is down, including all types of major crime except murder, aggravated assault and in some places, car theft.

Listen up, people: Crime is DOWN. (Except for the most serious and best-counted crime, murder, which was up 31% in June. But criminologists dispute that that has anything whatsoever to do with the immense outpouring of anti-police and anti-white rhetoric in the mainstream press since Memorial Day. Only Trump might suspect there’s a connection.)

… Much of the violence in Kansas City has had little rhyme or reason, often stemming from petty arguments that boil over.

“If people could settle an argument without having to resort to shooting, violence would reduce,” he said.

It’s almost as if the media lecturing blacks relentlessly about how they ought to feel angry increases black anger.