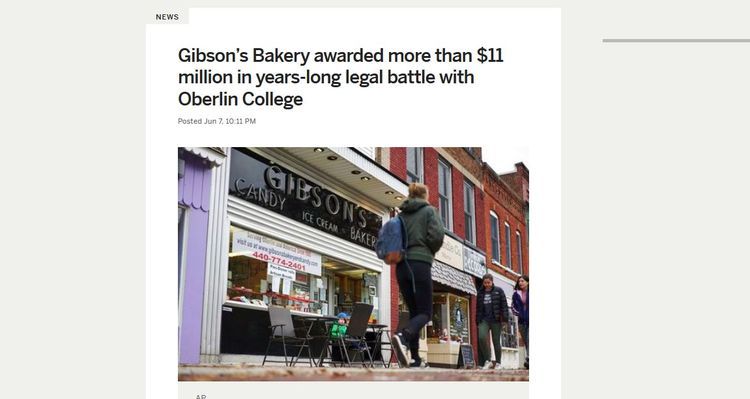 As Steve Sailer noted recently, a bakery near Oberlin College just won $11 million in damages from Oberlin itself, which has a 9-figure endowment, meaning they can pay $11 million, or with triple damages, $33 million.

The news article about it was headed Gibson’s Bakery awarded more than $11 million in years-long legal battle with Oberlin College, but while it was technically years-long, it's nothing in lawsuit years.

The case was covered in Michelle Malkin's December 13, 2016 article White-Owned Business A New Victim In The War On Small-Biz Bakeries. 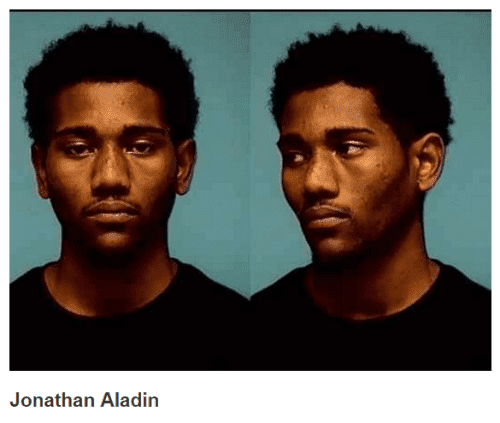 On Nov. 9 according to the city police report I obtained, shop employee Allyn Gibson caught a 19-year-old Oberlin College student allegedly stealing two bottles of wine and hiding them under his shirt. As officers approached the area, Oberlin Police Sgt. (Victor) Ortiz, and Officer (Raymond) Feuerstein both stated they observed Gibson lying on his back with several individuals kneeling over him punching and kicking him with several other individuals in the immediate area. Officers attempted to gain control of the situation and were met several times with resistance from several different individuals." [Incident Report, PDF]

Allyn Gibson attempted to stop the alleged thief, Jonathan Aladin (right) from leaving the store and tried to take a photo him as he bolted. Gibson got whacked in the face with his own phone. Aladin then reportedly ran while throwing the two bottles of wine on the floor, becoming "violent" and "grabbing and hitting Allyn." Aladin ran out with two females who were with him in the store. Gibson followed and tried to detain the alleged shoplifter again on the street.

Of course, the act of being robbed and assaulted by a black youth, let alone calling the police on them afterwards, is ipso facto racist, as a many crime victims could tell you. 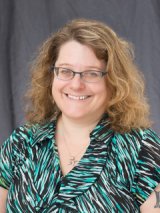 It gets worse. Leading the charge in the latest War on Small-Biz Bakeries is the Oberlin College dean of students, Meredith Raimondo (Email her) who joined the baying mob in bullying the Gibson family. She disseminated flyers libelously asserting that Gibson's is a "racist establishment with a long account of racial profiling and discrimination." Convicted in the crazy Oberlin College court of public opinion, the school refused to renew its longstanding daily order of donuts and bagels. For a small business with razor-thin margins, losing that order could be devastating.

And this devastation led to an $11 million damage verdict. The very idea that a jury could do this seems to have maddened the university authorities, as attorney William Jacobson points out at Legal Insurrection,saying "Publicly accusing jurors of disregarding “the clear evidence our team presented” when the trial is not over is another baffling move by Oberlin College."[Oberlin College mass email criticizing Jurors could influence Punitive Damages Hearing in Gibson’s Bakery case, June 9, 2019]

Novelist John Ringo, in an email to Instapundit, relates this to the town-gown conflict

Thus the jury was made up of ‘townies’ who resent the college, the students and the administration and the college resented that the unwashed townies were ALLOWED to have any input on the actions and deportment of their superiors.

Throw in the many notable examples of the current ‘elites’ being both lacking in competence and unlacking in hubris and you get everything from the protests against an innocent (townie/unwashed/ignorant) baker through the hubristic email. Not to mention a jury that’s about to throw the Oxford Unabridged Dictionary at them.

In fairness to the Oberlin College authorities, they don't, as evidenced by their record, only hate the townies, they hate all of white America. But they're subject to American laws!

This proves that lawsuits work, which is why we are taking legal action ourselves against Colorado Springs. I will invite you, once again, to contribute to our legal defense fund, because lawsuit victories like these are good for America.