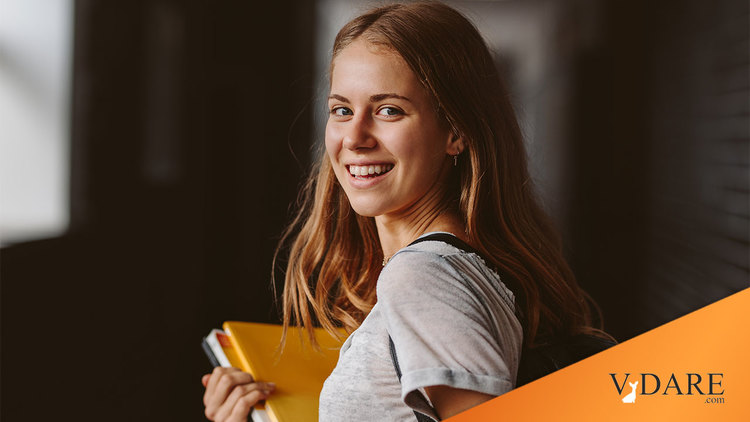 Slate: Your White Daughter Had It Coming

My White Daughter Was Bullied Out of Her Majority-Black School
How should we process this experience?
BY JAMILAH LEMIEUX
MARCH 19, 20215:58 AM

I am a liberal, White, upper-middle-class parent, and we live in a mixed-income, racially integrated urban neighborhood. When it came time to enroll our daughter in high school, we selected a school that was majority Black because it was close by, and we rejected the notion of getting caught up in which magnet school was most prestigious. Our daughter had a horrible time there—she was harassed so much that we had to pull her out, and other non-Black students there were victimized because of their race. I am struggling to make sense of the experience. I think she’s managed it well and hasn’t let it affect her general views on race, and I believe I’m doing the same, but mostly I am just so angry that our daughter had to endure this, and I feel guilty that I put her in this position. I also feel caught between friends who seem to want to say, “I told you so,” and those who seem to think that saying that she was the victim of racial harassment somehow makes me seem racist since it was at the hands of Black students. Maybe I should just chalk it up to bad luck, but how can I let go of the guilt and anger and all the other awful reactions I’m having to this?

—Hoping I’m Not a Karen

… I, like many other Black parents, take seriously the dual responsibility of teaching my child to both understand racism and resist the urge to take out the pain that racism causes her on people who benefit most from it. I also recognize that in an area like the one you live in—one that sounds like it is somewhere in the process of gentrification—an influx of upper-middle-class White folks can be absolutely devastating. So again, bullying, regardless of the bully’s background, is not OK, but you asked about the larger context here, and so that’s what I’ll try to unpack.

After years of being told that your community was unimportant and unworthy of resources, you get to watch it become a “hot spot,” see investment that would have never been made on your behalf. Black folks, who once had “the hood” as a place to be surrounded by their own kind after long days of having to labor for White people, now have to watch Whites become the most affluent, and seemingly most content, residents of our ghettos. If that were not traumatic enough, there is also the matter of our interpersonal interactions with our new neighbors, many of whom have called the police on us, unilaterally organized to reshape our schools, or otherwise come into our sacred places and treated us as we are so often treated by White people: poorly.

Here is another tricky subtext at hand when something like what your daughter experienced happens: Consider the likelihood that a Black person over the age of 16 has had or witnessed least one egregiously racist experience herself and has been made at least somewhat aware of how racism shapes the world around us. For us, this is to be expected. Racism is just part of what this country is and what we are up against, and we basically have to plan to suffer as a result.

One of the ways we attempt to negate that suffering is by forming community with others like us, away from the gaze of those who participate in and benefit from our oppression. Whether this was a school that was a source of pride for Black families in your area, or simply the local Black high school, it was a place where these kids—living lives undoubtably complicated by the gentrification that brought you to this area—connect with peers who are living like they do.

Your daughter might not have done anything deliberately to harm anyone or to invite mistreatment, but her presence disrupts something truly fragile: the feeling of safety Black kids get from being with other Black kids.

Safety, I tell you, safety!

Those kids see their parents struggling to afford to live in an area that is changing to better reflect people like you. They think of how they and the adults they love have been treated by White folks in positions of authority their entire lives (perhaps including some of the teachers at this Black school). They know the world is kinder to your child than it is to them. The combination of that knowledge, that pain, and their youth can be very volatile.

Here’s something else to consider: The disruption that White students pose in Black schools does not always come at the same cost to White kids that it did to your daughter. Indeed, there have been many instances of Black kids fawning over non-Black peers because they have been convinced that their privilege makes them somehow special. (Nearly every White rapper is an example of this happening on a grand scale.) How you might have reacted to something like that says a lot about just how prepared for this experience you were in the first place.

Imagine if your daughter had been very popular at this school, well-liked and embraced by her peers. What if her Whiteness had made her a celebrity of sorts, accepted and celebrated by students and teachers alike because of the ways that society typically privileges White girlhood? How might you have reacted to that? Would you have been concerned about how this could affect the Black girls in her class? What if she were the valedictorian in that all-Black school? Would that have been a problem to you?

And, most of all, what if the boys thought her hair was prettier than the black girls’ hair?

In other words, your little bitch had it coming.