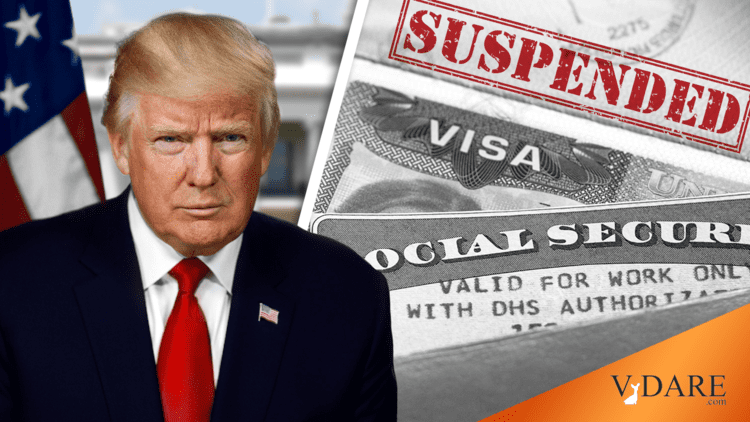 Trump's Moratorium On Visas A Start, But Saboteurs Had Their Impact

President Trump thwarted the Open Borders saboteurs in his own Administration, issuing an Executive Order on restricting certain Non-Immigrant Visas (NIV) based on employment; H-1B, H-2B, L-1, and J-1. It is late, it is a start, it will help Americans suffering under the China Virus fraud that was deliberately stage-managed to thwart his own re-election. It is uncertain if President Trump understands that this was a deliberate fraud directed at him. He has good instincts, but is either unable or unwilling to act in his own and America’s best interest.

I have noted that it is his own fault, as he has been functionally unable to find and appoint those who support his ostensible beliefs as expressed during his campaign. Consequently he has been captured by either the incompetent, such as Jeff Sessions, who allowed the Spygate coup d’etat to run under his very nose, to Jared Kushner who has his own agenda to the Chairman of the Joint Chief of Staff that actively opposed his policies and is openly insubordinate, to Deep State saboteurs in various agencies, but especially in the Department of Homeland Security (DHS) openly lying to him.

Both DACA and DAPA were created by policy memoranda signed by the Secretaries of DHS. An Executive Order is not limited by the Administrative Procedure Act (APA) and can be immediately implemented. Also of import, the Executive Order was specifically restricted to the issuance of the above NIVs after the date of the EO and does not affect NIVs issued before that date, which is a major problem.

In addition, pursuant to Proclamation 10014, the Secretary of Labor and the Secretary of Homeland Security reviewed nonimmigrant programs and found that the present admission of workers within several nonimmigrant visa categories also poses a risk of displacing and disadvantaging United States workers during the current recovery.

As always, the devil is in the details. The first problem is that it is only newly issued NIVs that are affected.

(i) is outside the United States on the effective date of this proclamation;

(ii) does not have a nonimmigrant visa that is valid on the effective date of this proclamation; and

(iii) does not have an official travel document other than a visa (such as a transportation letter, an appropriate boarding foil, or an advance parole document) that is valid on the effective date of this proclamation or issued on any date thereafter that permits him or her to travel to the United States and seek entry or admission.

This means that any employment based NIV listed in the ban, H-1B, H-2B, L-1, and J-1 that was issued on or before June 22, 2020, is still valid, even if the alien has not yet made their initial entry into the United States.

What this means is that the effect of the ban will be limited. For example, the H-1B selection process for the year has already been completed and most NIVs that had an approved labor certification have been issued and the alien is free to enter the United States.

That is over 65,000 new H-1Bs under the quota, then add the 20,000 or more Science, Technology, Engineering, and Medical (STEM) graduates who qualify for H-1Bs over the quota, plus the unlimited number of H-1B NIVs available to non-profits and government agencies, mostly State and local governments, primarily schools, colleges, and universities. While the non-quota H-1Bs may apply all year, most are used up early in the year. Clearly the evil Jared Kushner had a hand in this and the saboteurs in DHS snuck this through knowing the limited impact.

Importantly left off was Optional Practical Training (OPT) and Curricular Practical Training (CPT), both employment programs for foreign students in the United States on F-1 NIVs. OPT and CPT provide cheap labor, mostly in the tech industry, using substandard wages for as long as two years after graduation. Foreign students on OPT and CPT are sucked up by both the titans of tech like Google and Facebook, but also by fly-by-night Indian job shops, as well as massive tech contracting firms like Infosys, Wipro, HCL, and Tata that openly replace American workers.

OPT and CPT are unaffected and open for employers of all sorts to game the system. Expect a huge increase in Indian and Chinese foreign students coming to get third, fourth, and fifth Bachelor’s degrees or Master’s degrees at fraudulent universities who will issue OPT and CPT on the first day of classes. The students will go through the motions of taking courses, the schools will collect outlandish fees, and Amazon and Microsoft will continue their indentured workforce, just transferring from H-1B dependence to OPT and CPT dependence.

Also not addressed, is the current number of employment based NIVs in the United States: For H-1Bs alone it is estimated to be 3 million, not including dependents on H-4 NIVs and their anchor babies. A solution for this problem could range from prohibiting any H-1B from entering the United States regardless of the date of issue of the visa, but this would affect only a few who are out of the U.S. temporarily for a business or personal trip. What really needs to happen is that all H-1Bs, H-2Bs, and J-1s need to be ordered to depart the United States. With regard to L-1s, all should leave, with a limited exception of 1 NIV holder per employer or 1 per every 1,000 American employees at a particular company.

Also not addressed was the ongoing practice by which employers bring in aliens illegally on B-1 and B-2 NIVs and illegally put those employees to work in the United States. The Indian job shops like Infosys are notorious for this, but American firms like Boeing also use this scam.

Similarly, unaddressed is employers bringing in employees on B-1, B-2, and F-1 NIVs and then applying to adjust status to an employment based NIV, mostly H-1B and L-1 after entry. There is nothing in the EO that prohibits employers from exploiting this loophole. Just bring in an employee, apply to adjust status to H-1B or L-1 and you beat the EO. So, there are definitely saboteurs at DHS who did not warn the President about this.

So, the EO is a start, but President Trump needs to up his game. Personnel is policy, and his personnel are not serving him or the American people.