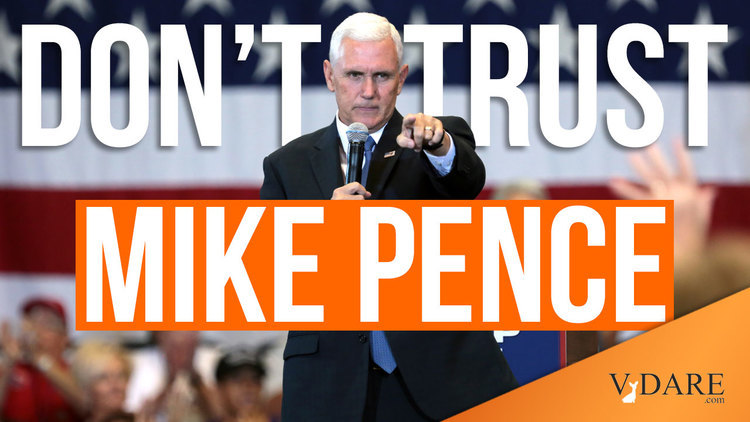 Observing the disgusting sight of Mike Pence eagerly prostituting himself to the Trump-hating MSM [Pence to CNN Town Hall: Americans Need Leadership Other than Trump, WIBC.com, November 17, 2022], I applaud my conclusion in my first blog on Pence back in 2006: Help! Helen Krieble’s Horse Farm Workers Want To Be Paid Too Much!

Helen Krieble is a fully accredited member of the Cheap Labor Lobby, her plan is a fraud, and Mike Pence is a contemptible disgrace.

This was dealing with the Pence Plan, a covert attempt of his to turn the flank of the valiant Patriots then struggling desperately to defeat Bush 43’s final (happily unsuccessful) attempt to push through Amnesty.

Pence went on to display craven cowardice and forensic ineptitude as Governor of Indiana, failing to defend effectively Indiana’s Freedom of Religion Act from the outraged Homosexual Lobby and their MSM allies, as discussed by Peter Brimelow in 2015: Three Key Terms That Could Have Saved Mike Pence! (And Will Save America)

But to me the definitive word on Pence’s turpitude was supplied by the late, great and deeply missed One Old Vet, who was also an Indiana citizen:

Pence personally assured me that he would never support amnesty nor any legislation that rewarded ILLEGALS. He lied.

In May of this year (2013) Mike Pence signed into Indiana law a bill that provides in-state tuition for ILLEGAL aliens. We can expect more of the same hispandering and semantic game playing from him that we’ve seen from other RINOS like Graham, McCain and Rubio.

When I quoted the above in Trump/Pence: Blunder Or Betrayal? I also noted

JAG commented on our Facebook posting of NO To “Hapless Jackal” Mike Pence Too! Trump Has Better VP Choices.

As a Hoosier, I can tell you that Mike Pence is a turncoat establishment GOP creep who believes in nothing but making money.

A crucial historical question is: Who foisted this awful rat on President-elect Trump?

James Fulford, in his annotation to A Reader Says Pence Has Always Been Untrustworthy, And Can Be Expected To Be So On January 6, wrote

“I doubt if anything can be done at this point to keep Biden from being sworn in, but if plans to stop it involve Pence standing like a stone wall, then new plans are needed.

No new plans made to benefit America can include Mike Pence.