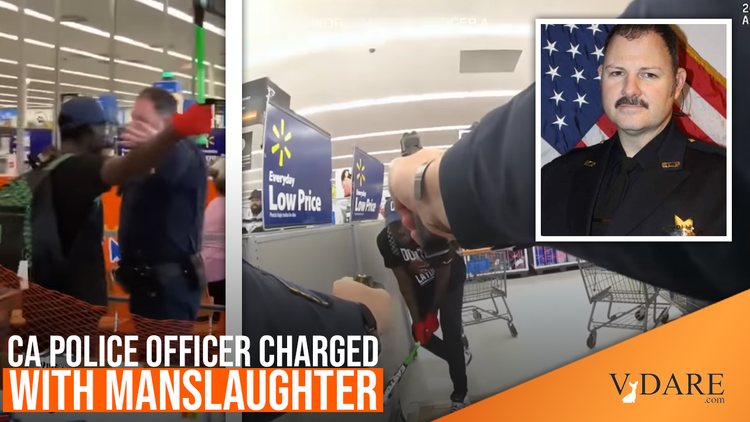 War On White Cops Ramps Up: ANOTHER White Officer Charged With Murder For Defending Himself Against An Armed Black Man

The George Soros-funded District Attorneys are continuing their attacks on white police officers for legally shooting violent black criminals. It is part of the general War on Whites who defend themselves from attacks, even from violent Antifa terrorists. In the most recent case, the female District Attorney for Alameda County, once the bailiwick of Edwin Meese, who was well known for prosecuting Berkeley rioters and Black Panthers, Nancy O’Malley, has charged a white police officer for shooting a dangerous black man threatening the officer and others with a stolen baseball bat. How things have changed in a once aggressive District Attorney’s office.

While O’Malley had a Soros funded opponent in her last election, it appears that although she won that challenge, O’Malley then adopted the whole Soros anti-police platform of her black opponent. O’Malley has decided that white police officers can’t shoot black criminals using deadly weapons to resist arrest.

A California police officer is facing a voluntary manslaughter charge more than four months after shooting an accused shoplifter in a Walmart store.

The Alameda County District Attorney announced Wednesday that she has filed a criminal complaint against Officer Jason Fletcher.

In a statement posted to the department website, District Attorney Nancy O’Malley wrote:

“The decision to file the criminal complaint was made after an intensive investigation and thorough analysis of the evidence and the current law.”

The statement goes on to say:

“When there is use of force by a police officer that results in death, the District Attorney’s Office conducts an independent and thorough investigation of the facts. We are mandated to apply those facts to California law.”

Officer Fletcher’s body camera captured his interaction with 33-year-old Steven Taylor just inside the front doors of the store on April 18.

In a matter of less than 40 seconds video shows the situation escalates to gunfire.

[California Police Officer Charged With Manslaughter After Being Forced To Shoot Criminal Who Had A Weapon, by Kim Clark, Law Enforcement Today, September 3, 2020]

As a Federal law enforcement officer for 28 years and with 8 years experience as a firearms and use-of-force instructor, I can categorically state that the shooting of the criminal Steven Taylor was justifiable. In summary, Taylor was advancing on hero Police Officer Jason Fletcher after failing to obey lawful commands to drop his weapon, the baseball bat, was unsuccessfully tasered, then shot as he advanced on Fletcher with the baseball bat raised in an aggressive manner. (People don't realize how dangerous a baseball bat is, but to quote Massad Ayoob's Deadly Force—Understanding Your Right To Self Defense,  "That seemingly harmless icon of innocent childhood, the baseball bat, is a common tool of assault and murder. Legend says notorious crime lord Al Capone used a ball bat to murder two associates he no longer trusted.")

The body camera footage is available and the reader can see for himself here; start at 2:30 on the video and in 40 seconds, Taylor signs his own death warrant by violently resisting arrest, refuses to relinquish the baseball bat, then advances on Officer Fletcher at 3:15.

Taylor is attempting to lift the baseball bat to attack Office Fletcher and is fighting the effects of the taser, but is still advancing on Fletcher when Fletcher fires a single shot. Nothing excessive, though Fletcher could have legally fired more rounds, as the rule is that deadly force may be used until the threat stops. Taylor, even after being shot, refuses initially to drop the baseball bat. Now, usually law enforcement offices are not trained to shoot once and evaluate the effect. Federal law enforcement officers are generally trained to fire at a minimum two to six rounds, but are always trained to shoot until the threat ends. My last particular agency trained for six rounds in initial contact at such close ranges, and three rounds minimum at longer ranges up to 15 yards.

Officer Fletcher was extraordinarily disciplined in his use of deadly force. If I were his firearms instructor, I would have informally counseled him after this incident to be more aggressive. Taylor was clearly on some sort of illegal drugs, and at that range multiple rounds would have been a better decision.

But this does not address the fact that Officer Fletcher put his own life in danger by attempting to disarm Taylor without use of any force other than what we call "empty hand control techniques". Officer Fletcher was obviously concerned about having to shoot a dangerous and violent black criminal. He anticipated that initially going to deadly force would have been dangerous for him, in the sense that he would have been prosecuted unjustly for using deadly force.

Consequentlly, Officer Fletcher put his own life, and the lives of others in danger, by attempting to use less-than-lethal force initially, including using open hands techniques, then a taser, all when deadly force was legally justified under Supreme Court precedent established in Tennessee v. Garner. Frankly, I would have shot Taylor after my initial command to drop the weapon and Taylor’s refusal to comply.

Tennessee v. Garner is, in fact, the new standard from the Supreme Court, law enforcement is not required to give any amount of warnings based on the judgement of a reasonable officer, but any warning is only required if there is no danger to the officer, and only one warning is required. That is the standard by which Federal agents and officers are trained.

Lest readers should misunderstand this issue, the War on White Cops is also a War on Whites in general. In the 90s black rappers shouted about killing cops, but their deep desire to shoot police officers was just a desire to shoot whites in general. And that is even more true today—just ask Kyle Rittenhouse. He was just a white kid defending himself from (white ) attackers motivated by black hatred of whites, the Burn Loot Murder movement, BLM adherents. Police officers are just a proxy for whites in general.

It is war out there, folks. They are out to get you. Even nice white district attorneys. The sad thing is that if backstabbers had resisted the urge to attack hero Officer Derek Chauvin, this might not have happened at all.