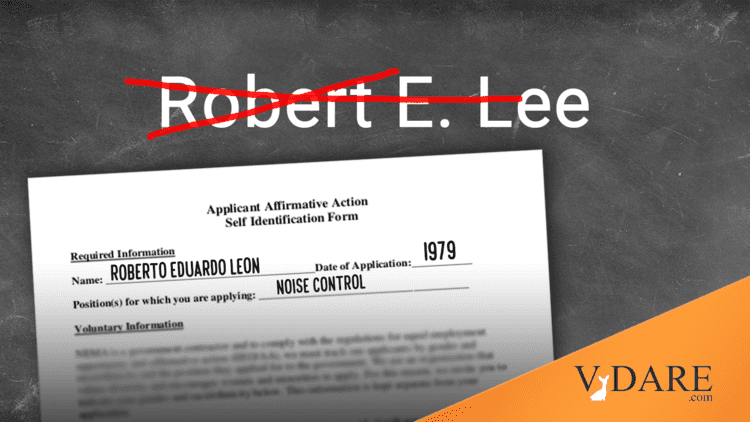 Anyone saddled with a name as fraught with history as Robert E. Lee might be forgiven the impulse to change it. But when retired Navy Captain Robert Earl Lee, 56, recently cast off that load in favor of Roberto Eduardo Leon, the response was something short of sympathy.

Leon, who earns $27,857 a year monitoring noise control for the Montgomery County (Md.) Environmental Protection Department, used the name change to apply for the county's affirmative action program—and the pledge of promotions ahead of equally qualified white males….

Montgomery County officials are decidedly un-amused, however, and Hispanic leaders are downright furious. "This is an insult to Hispanics," fumes Carlos Anzoategui, head of the governor's commission on Hispanic affairs. "You don't become Hispanic by liking enchiladas and tortillas."

Leon bridles at the charge that he is an "instant Hispanic." He points to a Spanish grandfather and a childhood in San Diego, where, surrounded by Latino playmates, he began speaking Spanish in high school…..

Meanwhile the county's newest, most controversial Hispanic is getting accustomed to his new heritage, if not terribly serious about it. "One of my compatriots called me a Spic," he says, "and we had a big laugh over it."

In People, Lee said he was in the same Annapolis class as then-President Jimmy Carter, with a higher class standing. This is probably true: Online records confirm the presence of a Robert Earl Lee at the USNA that year.

Of course, this isn't really Affirmative Action fraud in the sense the Rachel Dolezal was a fake black and Elizabeth Warren a fake Indian. That's because while Indian status is determined by "blood quantum" and African-American status, where relevant, by descent from black Africans, "Hispanic" status was frequently defined as "Spanish-Surnamed Minority."

That's why Carlos Anzoategui was so annoyed at Robert Lee horning in on his Hispanic privilege.

Roberto Eduardo Leon, with his fluent Spanish, Spanish grandfather, and plans, mentioned by People,  to retire to Chile (which is full of white people) would be as legitimate a Spanish-surnamed case as any of the above. (Cruz only has a Spanish surname because he's an American—if he lived in Mexico, he'd call himself Rafael Edward Cruz Wilson.)

This is what Steve Sailer calls the Flight from White, caused by minority privilege and anti-white hate.

1979 is more than 40 years ago, but even then, it didn't pay a government employee to be white. That's why Lee changed his name.