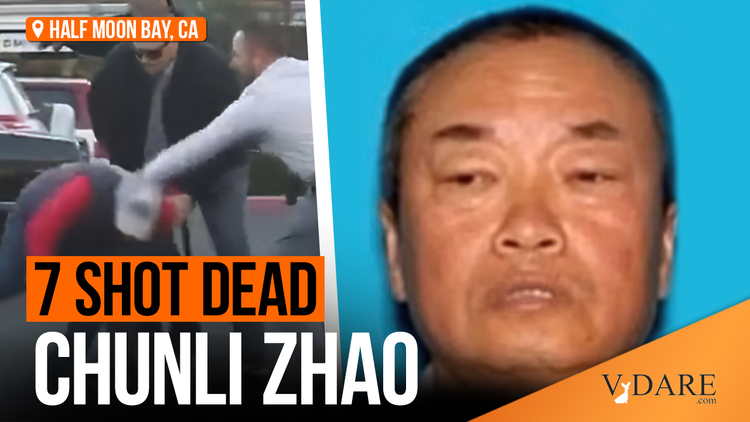 Yet Another Elderly Asian Mass Shooter In California: 3rd Of Last 12 Months

Zhao Chunli was named as the 67-year-old suspect accused in the shooting deaths of seven people in Half Moon Bay, California, according to NBC Bay Area.

ABC7 reported that the shootings occurred at two farms, and an eight person was critically injured. That site gave the suspect’s name as Chunli Zhao.

… Half Moon Bay is a California community near San Francisco. …

The Sheriff’s Department Confirmed a Suspect Was in Custody

ABC7 reported, through a source, that “the suspect worked at one of the mushroom farms, and all the victims were coworkers.”

Of course, there was a mass shooting by a 72-year-old Asian in Monterey Park in Southern California on Saturday, and one by another older Asian at an Asian church lady meeting last May.

(Back in 2020, seven middle-aged Laotians working at a marijuana farm in California were murdered. I don’t believe that case has yet been solved. The son of one victim alleged that it wasn’t an organized crime hit but a feud amongst the Laotian workers, which makes it sound like it might have some similarities to today’s shooting.)

So is this a Thing now: elderly California Asians shooting other Asians?

A lot of people deny that social contagion could have anything to do with the vast surge in Rapid Onset Gender Dysphoria among adolescent girls because whoever heard of teenage girls being fad-prone. Well, if elderly Asians can be subject to the power of bad examples, why not 13-year-old girls too?

In other mass shooting news, one dead and 7 wounded at the filming of a music video at a gas station in Oakland. The perp is probably not an elderly Asian, however.