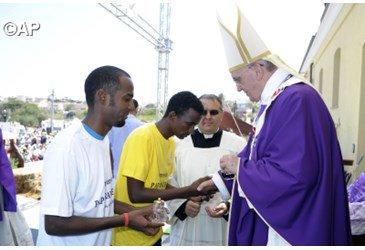 A Catholic Patriot On The Pope’s Visit

As an American Catholic and a patriot I have reason to be exasperated with my Church. That exasperation may well come to a head this month with the Pope’s visit to the U.S. The USA faces an invasion of illegal aliens. The Holy Father shows understandable concern for the migrants but a deaf ear to the claims of Catholics like me and others who work hard to make a successful life here, and to see that success endure.

My Church openly treats this crisis as an opportunity and a manageable challenge. We can expect the Pope to advocate the cause of the aliens during his visit. The Pope will in all likelihood exhort millions of blue collar Catholics to make way for people from failed, frequently Muslim countries. These newcomers will compete for scarce jobs while benefiting from Affirmative Action. The Pontiff is all too likely to address working American Catholics as if they were wealthy, and needing a lesson in humility and magnanimity.

This will set off all manner of political point-making and further aggravate patriotic Catholics. Leftists and enemies of Christianity will call upon us to heed the message of our pope, even as they work to destroy our faith in the public square.

While nominally affirming the right of sovereign states to control their borders, the Church enthusiastically supports what it calls “migrants” and their right to seek a better life in neighboring countries. Understandably, this comes across as contradictory at best and two-faced at worst. When Catholic clergy distribute the Blessed Sacrament through the fence with Mexico, 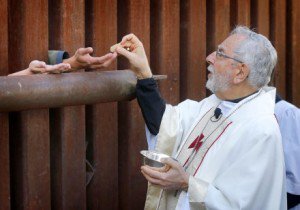 it enrages patriotic non-Catholics and embarrasses Catholics. [Cardinal O'Malley celebrates Mass along Mexico border,  By Brian Skoloff, The Associated Press, April 1, 2014] The majority of both legal and illegal aliens from south of the border are nominally Catholic and the Church’s outreach to them looks a lot like a self-serving betrayal of America. In the Who-Whom analysis, it looks like the Catholic Church gets more parishioners while Democrat Party get more voters.

Why does the Roman Catholic Church do this? Can we make it stop? Is there a way to approach the Church on its own terms to make our case?

The fundamental problem we have in defending our American way of life and nation from the Church’s stands is that the Church is not concerned with nation-states as such. Perhaps it would be better to say that the Church sees nations, and cultures for that matter, as epiphenomena. The Church is an international organization with a single focus on spirituality and spiritually-derived qualities like charity and justice. Nations, kingdoms and empires come and go in the Church’s experience. The Church’s mission never changes. It’s spreading the word of Jesus Christ all day every day from now until the end of time. She’s been at it for about two thousand years, and we are not going to make her change.

That said, the Church is itself a sovereign state. For many centuries she has been deeply involved in temporal affairs. This is in the context of the peculiar nature of Western Civilization. Unlike Islam and Classical civilization, we have always managed to adhere to the idea that government and the Church are, and should be, two separate entities. (Except within the papal state itself.) Citizens or subjects answer to secular authority on secular matters but they are morally informed by the Church as the organ of God’s teaching on earth.

The Church literally brought about this state of affairs at the end of the Roman Empire. It’s good to remember this as the Western World as we know it is an outgrowth of a previous migration event. The collapse of Roman authority via the Germanic invasions put the Church in the position of mediating, guiding and sometimes adjudicating the transition from Roman to Medieval Europe.

On the whole the Church succeeded. But it’s important to note that the early Church was not an advocate for barbarian incursions. The bishop of Rome was under no illusion as to the damage the barbarian invaders were doing to Roman civil society.

We might ask current Church leaders why they seem to be so blind to the effects of migrants to our society. This is all the more pressing when we think of the fact that many of the Germanic barbarians were, like current migrants, hoping to prosper within the Roman Empire, not to destroy it. But destroy it they did.

One useful distinction here is that in European History in which the Church emerged, there is not only national states, but separate and distinct peoples. Pope Paul the Great was not just from Poland. He was a Pole. There is France and there are the French. Even when there was no independent Ireland, there were the Irish. These people have language, cultural norms and what we now call genetics in common. The Church seems to have understood this for a long time. Even recently both Pope John Paul II and Pope Benedict called on the European Union to acknowledge a common European Christian heritage in its constitution.

This leads us to at least one reason the Roman Catholic Church is so blind to our concern. The Catholic Bishops have bought into the Cultural Marxist “nation of immigrants” malarkey. For instance:

From the viewpoint of the U.S. Bishops, it has been apparent for several years that our immigration system is broken and badly in need of repair. The U.S. Bishops are united in the view that migration is beneficial to our national economy, socially and culturally. The strength of our nation comes from its diversity and from the hard work and contributions of immigrants who have come to our shores over the past two hundred years. It is identity and soul.

– The most Reverend Kevin Farrell, Auxiliary Bishop of Washington and member of the Catholic Conference of Bishops Committee on Migration. [Emphases added.]

This is taken from the definitive statement of American Catholic teaching on the subject, called “Welcoming the Stranger Among us: Unity in Diversity” [November 15, 2000]

This statement by the U.S. Catholic Bishops is a compendium of the Bishops’ deep thoughts on immigration, which of course they insist on calling …”Migration.” Most striking to me are the mutually contradictory assertions. For instance:

Strangers No Longer Together on the Journey of Hope | A Pastoral Letter Concerning Migration from the Catholic Bishops of Mexico and the United States, Issued by USCCB, January 22, 2003

It goes on, but the inherent contradiction between #2 and #3 is evident.

If the Bishops’ understood that “migrants” actually depress the wages of poorer American workers, who are also facing the robotic worker wave, might they might change their view? Perhaps, but the multicultural, anti-Western academics whom the Bishops rely on for economic advice aren’t going to help them understand.

What is to be done?

It’s clear that the Church does respect diverse cultures and national groupings. Otherwise why stress out need to accept such cultures and groupings when they show up, unbidden here? The Church’s problem seems to be with our American traditional culture. It seems to dismiss what we have developed here as a passing stage in an endless procession of immigrant invasions. If it didn’t think this way, it would understand how insulting its pronouncements are.

I have a suspicion. For many Bishops, the fact that America began and substantially still is a product of English and Scottish Protestant culture is problematic. I suspect that contemporary Bishops, with a poor understanding of our history, think that the rapacious Capitalism they see running amok today is the result of Protestant thinking.

We American Catholics must help them to see that a traditional American culture is not either anti-Christian or anti-Catholic. If the bishops want to combat consumerism they need look elsewhere for the culprits. Our job is to make the Bishops understand that, however distasteful they personally may find think our distinctive culture, it has a right to exist and prosper, here where it took hold.

We Catholics who adhere to that culture are not crypto-Protestants. We are members of the Anglosphere, a successful and respectable cultural tradition. To be a member of that culture is not to be anti-Catholic any more than is being Japanese is incompatible with being Catholic. We have a right to maintain our Anglo society—just as everyone from the Rio Grande to Tierra del Fuego has a right to remain Latin.

Apparently, the Church, like all elite institutions, is not immune to the Leftist spirit of the times. It certainly shows in the assumptions displayed in the Bishop’s statements. We can hope that like all generational things, it will pass eventually.

In the meantime, we need to expose the false guides the bishops employ when speaking on economics and other worldly matters.

The second thing we American Catholics must do is to point the Church in the right direction. Again from the Bishops:

“And we remind heads of government around the world that emigration of all kinds—but especially that of those fleeing war and persecution, famine and economic distress—is a sign of the failure of the whole international community to guarantee the security and welfare of all people in their homelands.”

The Bishops again and again call upon this mysterious “international community.” Surely even the Bishops know that this “community” doesn’t exist.

American Catholics must press upon the Church that it is Catholic countries to our south that press these migrations upon us. The Bishops ignore the failed Latin Catholic societies’ responsibility to manage themselves successfully. They need to be reminded of this. Their colleagues in the distant past did us all a service when they taught their barbarian converts to manage their affairs in the manner of the Romans. The U.S. Bishops would do well to spread a bit of Anglo know-how to the south—rather than spreading Latin poverty here in the north.

Thomas O. Meehan (email him) is a free-lance writer and former government Senior Research Analyst and Inspector. A refugee from the People’s Republic of New Jersey, he now lives in Bucks County PA. He blogs from Odysseus On The Rocks.