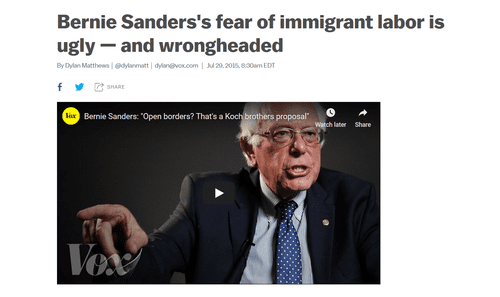 Bernie Sanders, independent socialist Senator from Vermont, announced his presidential candidacy last week to much fanfare. He is set to be one of the strongest 2020 Democratic candidates as his socialist positions ascend to the party’s mainstream. But he has a problem: his past brief moments of immigration patriotism.

In recent years, Sanders has echoed the talking points of his Democratic colleagues on immigration. He’s called Trump a racist for trying to reform our broken immigration system. He’s supported Amnesty for the DREAMers and wants to abolish Immigration and Customs Enforcement. [Bernie Sanders Calls To Abolish Immigration System, Restructure ICE, by Lydia O’Connor, HuffPost, July 3, 2018] .

But Sanders wasn’t always like this. For years, he made the economic case against mass immigration.

He voted against Amnesty in 2007 because he said it would hurt American workers.

“If poverty is increasing and if wages are going down, I don’t know why we need millions of people to be coming into this country as guest workers who will work for lower wages than American workers and drive waged down even lower than they are now,” Sanders said in an interview with Lou Dobbs in 2007. [Transcript][Why Conservatives Praise Bernie Sanders on Immigration, by Sam Frizell, Time, January 7, 2016]

Sanders didn’t stick to this stance in 2013 when he voted for the Gang of Eight Amnesty. But he still expressed his economic argument against mass immigration.

“It does not make a lot of sense to me to bring hundreds of thousands of those workers into this country to work for minimum wage and compete with Americans kids,” Sanders said in 2013. [Bernie Sanders: Immigration Reform Should Rein In Guest Worker Programs, by Dave Jamieson, Huffington Post, June 20, 2013]

Early on in the 2016 campaign, Bernie said he believes open borders is a “Koch brothers proposal.”

Sanders’s conclusion about Open Borders: “It would make everybody in America poorer—you’re doing away with the concept of a nation-state…”

Bernie’s insistence on opposing Open Borders and framing it as an evil libertarian plot was reflected in an op-ed written by then-campaign staffer Richard Eskow for the senator’s website.

“[O]pen borders]” is a superficially attractive idea – until it’s subjected to critical thinking, at which point its true nature is revealed.  Its proponents attempt to make a “moral case” in its defense. But there is no moral case to be made for sacrificing democratic decision-making and national sovereignty to oligarchic and corporate whims.

That op-ed has since been deleted from Bernie’s campaign page, but fortunately (albeit not for the Sanders campaign) an archived version still exists.[“Open Borders”: A Gimmick, Not a Solution,  by Richard Eskow, August 5, 2015]

It’s no surprise Bernie’s past statements drew the ire of professional immigration boosters. Alida Garcia, director of coalitions and policy for Mark Zuckerberg’s  FWD.us told Sam Frizell (above) in 2016 that the senator’s rhetoric was very bad because it “pitted immigrants as an obstacle to tackling unemployment on a number of occasions.”

Of course, while Sanders’ rhetoric is nice, it doesn’t make up for his more recent comments and immigration agenda. Bernie’s 2016 platform read like a wish list for the Open Borders billionaires he claims to despise. It called for the legalization of all illegal aliens, the dismantling of “inhumane deportation programs and detention centers,” reversing “the criminalization of immigrants,” giving free healthcare to migrants, and the expansion of the Diversity Visa system.

But the platform did insist on securing the border and support for e-Verify—two ideas you will not hear from the other 2020 Democratic hopefuls.

Sanders’ 2020 agenda will likely ditch the two bits of immigration patriotism in favor of the Democrats’ current Open Borders preference. However, that quick conversion may not be enough to protect Sanders’ from xenophobia accusations. Identity politics will dominate the campaign cycle, as Bernie knows well as an old white (Jewish) guy struggling to win over an anti-white party. His strong criticism of Open Borders--now the de-facto Democrat position—will embarrass him and likely lead to a clarification that essentially endorses Open Borders.

Pro-worker Democrats now have to pretend immigrants don’t hurt working-class Americans and that the Koch brothers are xenophobic. No criticism of Open Borders will be tolerated and any mention of immigration’s harmful effects on American workers will be prohibited.

Sanders has struggled to master the Democrats’ new standards. Last June, he stood up for ICE and said he opposed its abolishment. He received a ton of flak for that position and was forced to reverse himself a month later. [Bernie Abolishes His Opposition to "Abolish Ice", by Ethan Epstein, Weekly Standard, July 17, 2018] There’s a good chance he will continue to flub on immigration and trip over the dictates of Open Borders dogma.

Bernie is not the only Democrat who has to atone for their previous bouts of immigration patriotism. Kirsten Gillibrand’s early congressional campaigns touted her firm opposition to illegal immigration and support for a border wall. Gillibrand ran from the Right on immigration against her Republican opponent in 2006 and called for English to be made the official language. [How Kirsten Gillibrand went from pushing for more deportations to wanting to abolish ICE, by Andrew Kaczynski, CNN, January 17, 2019]

In 2019, Gillibrand wants to abolish ICE and insists white women must do more to fight racism. She claims her past immigration hawkishness was due to ignorance and she now knows it was wrong to advocate such positions. [At Sharpton event, Gillibrand pledges to 'amplify your voices', by Emilie Ruscoe, Politico, January 21, 2019]

But Gillibrand got her start representing a red-district in upstate New York and she likely adopted her earlier positions to appeal to her conservative voters. It was pure politics; once she realized it was more advantageous to become an Open Borders advocate, she chose that path.

Sanders is different. His past immigration views were supported by his socialist worldview and appeared to reflect his personal views on the matter. He maintained these views even when they began to hurt him politically.

But the Democrats have become so radical and intolerant of deviation from open borders dogma that Bernie has to conform to the party line to survive. His candidacy would quickly die and the young socialists would flee from him if he kept his old immigration views. Democrats care more about foreigners than workers, and Sanders upholds that preference with his current alignment.

I think Sanders is a strong contender in the 2020 primaries. His economic positions are popular, he has high likability and high name recognition, and he has a strong infrastructure in place for his new presidential run.

But he has a vulnerability when it comes to his identity and his old views. Sanders’ main rivals will exploit his past immigration views to paint him as a white racist. And that may well be enough to wipe away the Vermont senator’s advantages in the race.

Open Borders is no longer a libertarian fantasy--it’s the Democratic platform. Bernie will pay the price for failing to embrace it sooner.