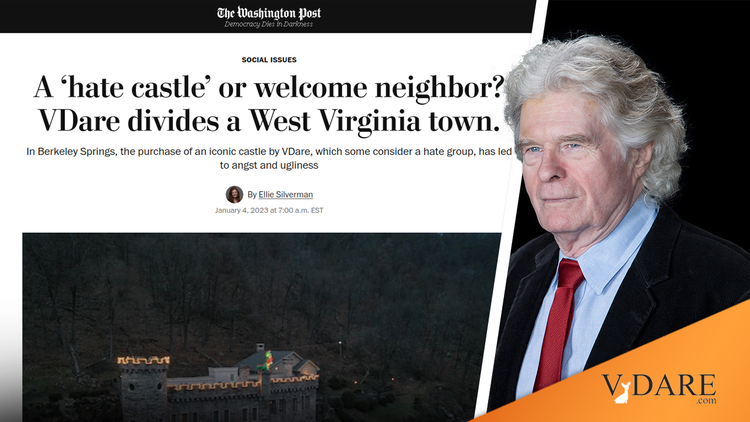 There were a remarkable 3,493 comments on A ‘hate castle’ or welcome neighbor? VDare divides a West Virginia town [by Ellie Silverman, Washington Post, January 4, 2023] (Get around paywall here), when WaPo’s ever-watchful moderators aka censors closed the thread. Silverman, who in an astonishing waste of WaPo resources had been poking around our new home town Berkeley Springs, WV since September, was completely unable to demonstrate that my young family and I are anything other than good quiet neighbors who attend church and support the local Bath Christmas Project—Bath is the name of our historic district—which decorates the town, and now our Castle, for Christmas. I was frankly puzzled why she and her editors considered us front-page news—until I studied their comment thread. WaPo’s readers, apparently living in a state of Edenic innocence down there in Swamp Central, were absolutely shocked and OUTRAGED to learn of our existence and of any dissent at all on immigration policy. They flat-out want us declared a terrorist organization, banned and even fire-bombed. As I said In 2017, presciently: "It Will Come To Blood"—Reflections On The Left’s Anti-Trump Inauguration Tantrum. However, my West Virginia neighbors are armed to the teeth, God bless them. I do believe they will defend themselves—and America.

Because I don’t trust Regime Media journalists, I no longer deal with them except by email, so my full exchange with Silverman is posted here. Similarly, my full exchange with Southern Poverty Law Center enforcer Michael Edison Hayden, who has claimed credit for coordinating this latest attack on our presence in Berkeley Springs with Silverman, is posted here. Our response to Hayden’s subsequent contribution to his and Silverman’s coordinated attack on us is here.

(Is it ethical for Regime Media journalists to coordinate with communist vigilantes like Hayden? Silverman didn’t answer when I asked her.)

At least Silverman’s article was, no doubt inadvertently, a triumph for the heroic Bath Christmas Project volunteers:

White lights gleamed from the garlands and wreaths adorning the gazebo in Berkeley Springs State Park. A large Christmas tree was lit next to the courthouse. Even the parking meters downtown were decorated for the holiday, transformed into snowmen, garden gnomes and the Grinch.

And looming above it all: the Berkeley Castle, a 19th-century structure that has become as much a symbol of this tourist town two hours northwest of Washington as the flowing hot springs that gave this Appalachian community its name…[Link in original]

And a triumph also for the Bath Christmas Project’s completely non-political fundraisers held at our Castle:

When visitors filled the great hall of the castle on an early December evening, no one mentioned VDare.

Strangers came together, waving their arms to get a crying baby to smile for a photo.

Families walked up the staircase covered in red carpet and saw a display of a toy penguin diving down a mini slide. Kids picked up faux snowballs and tried to sink them through a basketball hoop. 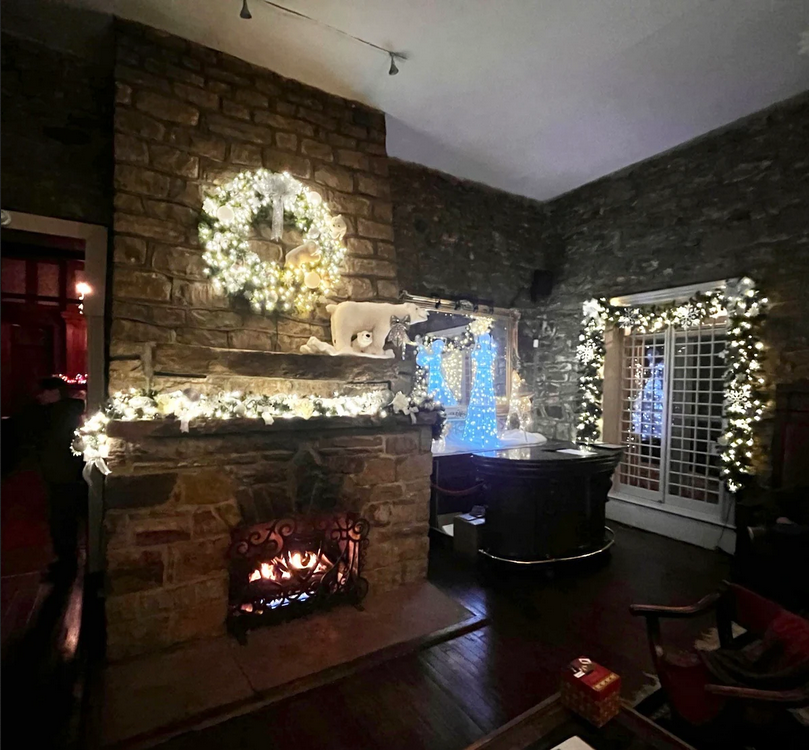 There was no sign of the Brimelows. There were no Confederate flags or talk of an immigrant invasion.

As people left the castle, they looked out over the town. They were on the grounds of VDare’s headquarters, but all they saw were twinkling lights.

As opposed to fiery crosses? How disappointing!

I should note some surprising (given the length of time Silverman she and her editors were working on her article) errors:

“The Castle” wasn’t “offering” anything. We merely donated our space for Bath Christmas Project fundraisers, and all proceeds go to them. We know—Berkeley Springs is a small town—that this was painstakingly explained to Silverman.

WaPo’s link (for which we thank them) is to a Lance Welton discussion of evidence, developed by a Chinese academic, that the IQ of black-white couples tends to be lower if the mother is black.

But this is a purely empirical question and does not necessarily suggest (except in the minds of the paranoid) that “White people are superior to other races.”

Silverman here failed to report my explanation: I was making a purely legal point about the vulnerability of over-ambitious leftist judicial legislation—a point with which the Democrat-controlled Congress tacitly agreed when they scrambled to protect Obergefell, the 2015 homosexual marriage decision, in the Lame Duck session.

Of course, VDARE.com does report on the obvious failure of government-mandated racial integration, because it has implications for the Diversity that post-1965 immigration policy is importing. However, whatever the answer to integration’s failure, it should be decided by debate and legislation, not judicial decree.

FYI this was our announcement—Lydia Brimelow: We Got The Keys To The Castle! —with our own photo.

This is a continuing leftist mistake. They will not get it through their head that Donors Trust is not “a charity” but simply a pass-through operation, one of the decreasing number of Donor Advised Funds that will still honor donor requests to give to Politically Incorrect causes. (Note to potential donors: be very careful who you choose to manage your charitable giving—many DAFs are controlled by Woke bureaucrats who delight in frustrating your wishes.)

(ANOTHER NOTE: In an earlier version of Silverman’s article, she implied that the Koch brothers directly supported us through Donors Trust, which of course as Open Borders libertarian loonies they would never do, but indicates her ignorant paranoia. And that of the many WaPo commenters who believed her.)

2019 was our best-ever fundraising year and the VDARE Foundation Board approved a bonus. In contrast, 2022 was a leaner year, partly because of the opportunity cost of responding to New York State Attorney General Letitia James’ intrusive subpoenas, and my salary has been suspended for some months, not for the first time.

It’s obvious in the comment thread that some WaPo readers didn’t realize from Silverman’s account that Stein was not simply expressing an (arguably protected) opinion—instead, he was alleging facts, repeatedly, even after he was told they were wrong. Hence his motion to dismiss our libel action was scathingly denied by West Virginia Circuit Court Judge Debra McLaughlin on January 22, 2022 because she found his factual allegations “malicious and willfully false.” That was why he had to settle—not (as these WaPo commenters assume) because he ran out of money.

In fact, SPLC enforcer Michael Edison Hayden told the small coven of local leftists he met with while coordinating his attack on us that Stein had approached the SPLC for help. Did the ultra-wealthy SPLC fund the expensive law firm that argued Stein’s initial Hail-Mary defense—perhaps in the hope that we could be financially exhausted (which, thanks to the wonderful donors to our legal defense fund, we were not)?

Ten years ago, in the halcyon days of the free internet, Regime Media comment threads were almost always vitriolically opposed to whatever it was that the Regime Media was pushing. As a result, John Derbyshire in his 2013 John Derbyshire Says If There Is Hope, It Lies In The Comment Threads predicted in his cheerful way that comment threads would eventually be shut down. And this has indeed now largely happened.

But the Washington Post is apparently still sticking with straightforward comment thread censorship, as more than one commenter complained:

Perhaps for this reason, the remaining comments were overwhelmingly hostile to us, in extreme terms that caused even one critical commenter to protest: 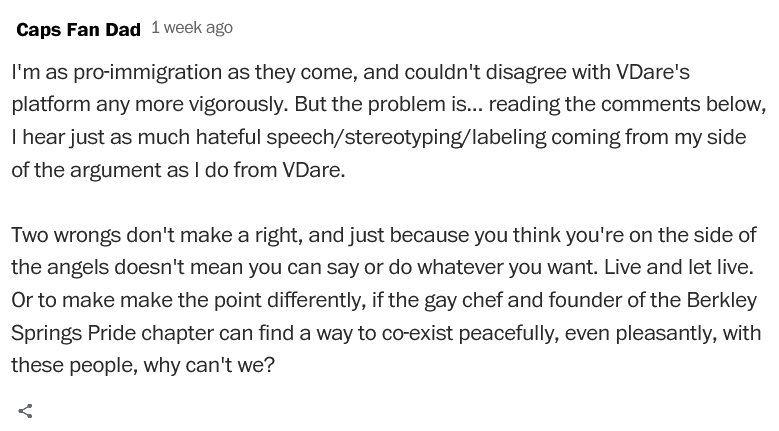 Remember popular folk sayings like “Live and let live”? “Everyone’s entitled to their own opinions”? “Agree to disagree”? Once omnipresent, they have completely disappeared from the political culture, which is now self-righteously totalitarian.

Even at this late stage of the immigration debate, it was glaringly obvious that many WaPo commentators had no acquaintance at all with even the most basic critique of current policy.

Sigh. My answer, as I have been saying patiently for more than 30 years: 1) Just because I’m the last on the lifeboat, am I not supposed to point out that bringing more people on will cause it to capsize; (2) I have American children. Am I not supposed to care about the country they will live in? (3) If you don’t like being told what to do by immigrants, stop immigration! Or get used to it.

It is one hundred years this year since the Beer Hall Putsch, and yet the Nazi specter is still paralyzing rational debate in a country three thousand miles away that never had anything to do with Nazism and in fact fought against it.

So crazed has this obsession become that a local historian’s book was adduced as evidence because of the type on its cover:

The book  is available on Amazon, and the traditionally German typeface on the cover was actually banned by Hitler: 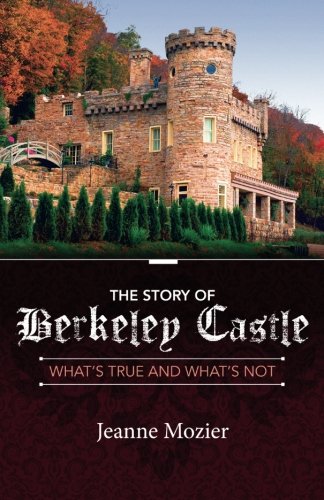 I’m not going to give examples because I don’t want to expose them to more abuse, but we are most grateful to them.

Again, I’m not going to give examples, although it slightly surprises me that WaPo’s censors let it go through—didn’t the attacks on Lydia, for example, strike them as, what’s the word, “sexist”?

On the other hand, looking at my picture, I guess I can see why I’m described as a “cadaver.” 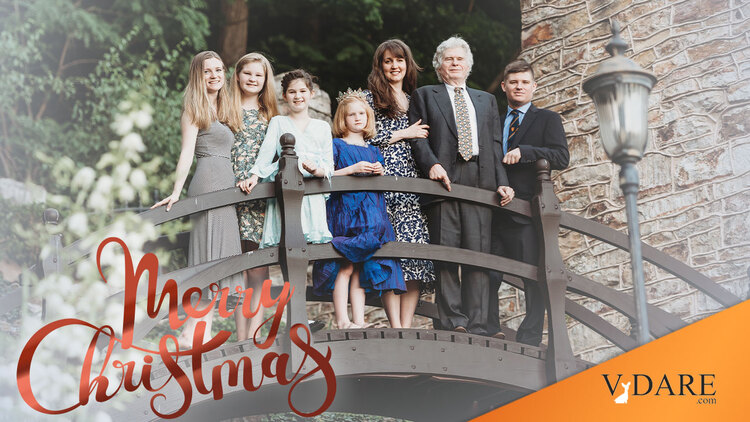 that provoked one of the most telling comments:

This goes to the motivation of the Washington Post and its pet commenters: anti-white animus. 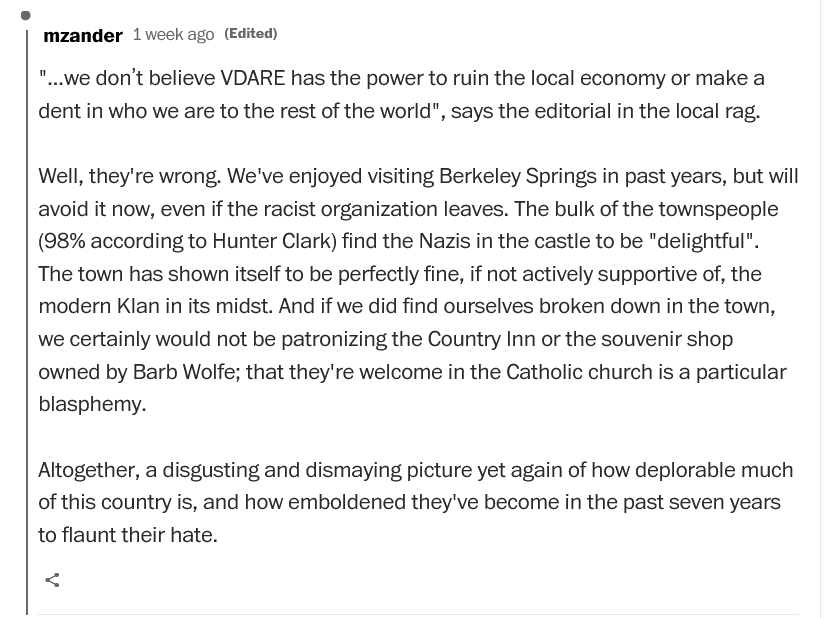 As an embittered local liberal points out, that will teach local artists to try to turn red areas purple!

(I urge VDARE.com readers and all patriots to visit Berkeley Springs this year—it’s only two hours from the U.S. Capitol. And come to next year’s Bath Christmas Project fundraiser at the Berkeley Springs Castle!) 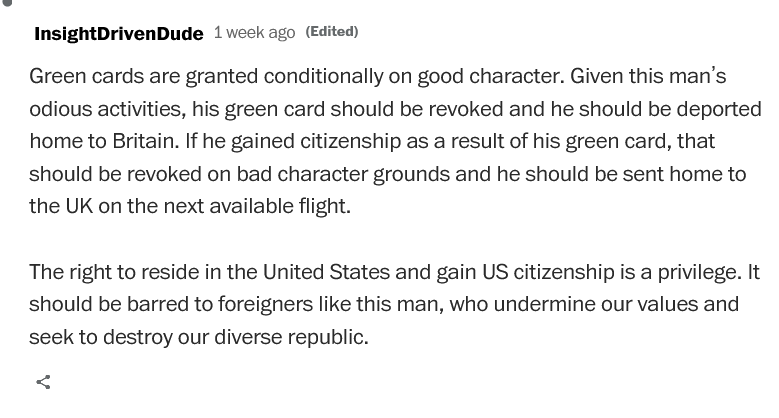 On the other hand, one commenter recognizes what Lydia achieved when she bought the castle:

An awesome deal indeed—but we would have preferred to keep that $1.4 million liquid (we had to pay cash because we knew any bank would come under pressure to pull a loan) and be able to hold conferences across the U.S,, as if it had not become a communist—let’s not mince words—anarcho-tyranny.

The Berkeley Springs Castle may be only two hours from the U.S. Capitol, but it’s a different world—or, more precisely, a different country. It’s called America.

And the Left Totalitarians of Washington D.C. are frantic to suppress it—if they can.

(Thanks to John Kline for defending us in When Big Media Comes to Your Town! [Amgreatness.com, January 9, 2023].)