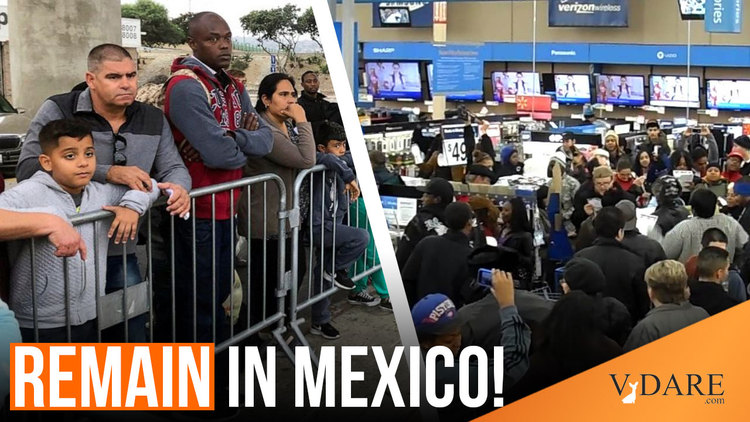 Adapted from the latest Radio Derb, available exclusively at VDARE.com

Earlier by Michelle Malkin: Amnesia of the Anarcho-Tyrannists

You've seen the video clips and read the news stories. Gangs of looters spent the Thanksgiving weekend looting retail stores in our cities: Nordstrom, Louis Vuitton, Home Depot, Best Buy, Apple, pharmacies, jewelry stores, … Not all of these were big chain stores. Some, especially the jewelry stores, were single-outlet family enterprises. This gives a whole new meaning to the term "Black Friday."

This is all backfiring -
Oakland mayor will reverse plans to defund the police amid spike in violent gun crime after three people were killed over Thanksgiving weekend including security guard shot by a smash-and-grab looting gang - pic.twitter.com/3SyXOQeuAp

Cops made a few half-hearted arrests here and there, but no perps were detained for long. After Thanksgiving Day lootings in Los Angeles the LAPD made fourteen arrests. Reporting on this a week later, the LA Times said "none of the 14 suspects remains in custody." One was a juvenile, the others were all bailed out or released without bail [ LAPD announces 14 arrests in connection with recent smash-and-grab robberies , by Gregory Yee, Brittny Mejia, LA Times,  December 2, 2021].

So far as we have been permitted to see, the looters are all black. No surprise there: to a fair first approximation, all crime in the U.S.A. is committed by blacks.

Hence the cautious, hands-off approach by police and prosecutors. If black looters were held indefinitely in jail the way those white January 6th protestors have been—except of course, I mean, for the one shot dead by a black cop—the city's crime stats would not display equity.

That would be terrible—plain evidence of white supremacy!

Our underclass is taking the concept of free stuff to a whole new level. Welcome to Jim Snow America.

President Biden's spokes-bot, the very lifelike Jen Psaki, was asked about the causes of all this looting at a presser just yesterday. The person asking was Fox News reporter Peter Doocy.

Hoo-kay. Doocy followed up with: "Does the president still think that crime is up because of the pandemic?" The bot evaded that, now blaming the Second Amendment somehow. Doocy pressed the question: Did Ms. Psaki think the pandemic caused the looting? Yes, she finally told us, she did [Jen Psaki says COVID-19 is the root cause of looting in US, by Samuel Chamberlain and Steven Nelson,  NY Post, December 2, 2021].

So that's the administration's explanation for the looting. Nothing to do with looney-tunes prosecutors obsessed with "equity" in arrests and incarcerations.

You see how she's been programmed? Whatever calamity she's asked about, she'll first blame it on Trump, then on the Second Amendment, then on Covid.

Doocy didn't pursue the matter further. If he had, Ms. Psaki would have fallen back on climate change. I could have coded up her responses myself in COBOL.

This is the rule, not the exception. But even before black looting became de facto legalized, we were quite comprehensively lawless in another major area of national policy: immigration.

If you wanted a pictorial illustration of the word "lawless," you couldn't do better than those battalions of Haitians walking into the USA in September, in defiance of our laws.

That's just the visible tip of the illegal-alien iceberg, though. Unknown millions of foreigners—very likely tens of millions—live in our country without ever having been given authorization to do so. Border jumpers and visa overstayers live and work here, using our publicly-funded systems for health, education, and policing, bringing forth children—does anyone even have an estimate of how many? —who are automatically given citizenship.

That birthright citizenship is at least legal under the currently prevailing interpretation of the Fourteenth Amendment, Section One. It's none the less crazy for all that, and would not be legal if either of our big political parties had enough of a spine to challenge it.

This Biden administration has declared openly, brazenly that it will not permit enforcement of the people's laws on immigration in a long and not exhaustive list of "protected areas," loosely defined.

Schools, such as known and licensed daycares, pre-schools, and other early learning programs; primary schools; secondary schools; post-secondary schools up to and including colleges and universities; as well as scholastic or education-related activities or events.

"This isn't a booze party, Mr. ICE officer, this is an education-related activity. Hey, take your hands off me! Lawsuit!"

There should be impeachment of Biden and Mayorkas for failing faithfully to execute the laws, as they promised to do in their oaths of office. Again, though, we come up against the congressional spine deficiency.

In all this lawlessness, I'm happy—not thrilled or delighted, but happy—to report the administration having taken one small step back towards respect for the law.

Monday, December 6th, they will resume Donald Trump's Remain in Mexico policy [Mexico to Allow U.S. ‘Remain in Mexico’ Asylum Policy to Resume, by Eileen Sullivan and Oscar Lopez, NY Times, December 2, 2021]. This is the one, hammered out in agreements with Mexico, that people who cross the southern border claiming asylum have to wait in Mexico while their claims are processed.

What's actually being resumed is a weaker version of Trump's policy. It will apply to asylum claimants from the Western hemisphere, but only in a very limited way to others. Also, the DHS has to complete processing within six months, and help the claimant get legal counsel.

And the administration didn't retreat on this out of the goodness of their hearts. When they stopped the Trump program in January, Texas and Missouri sued to have it reinstated. A Texas federal judge agreed with them and the Supreme Court wouldn't hear the administration's appeal. Biden & Co. have worked up a new appeal, currently pending in the court system. If this appeal stands, the admin's told us, they'll end the program immediately.

But, so far, they're following lawful process here.

The Biden Administration, following lawful process on an immigration issue—wonders will never cease!