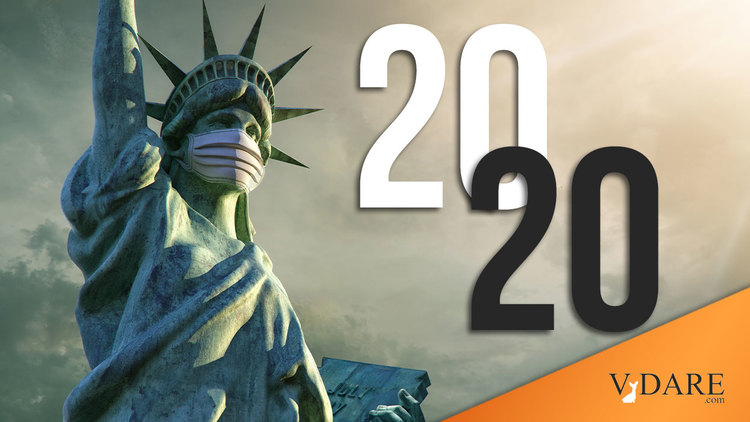 Who could have predicted how dreadful a year 2020 would be.

By this New Year's Eve, 19 million to 20 million Americans will have contracted a deadly virus in a pandemic that exploded out of China to carry off 333,000 Americans, one of every 1,000 of us.

As 2021 begins, Americans will be dying at the rate of 10,000 a week and contracting the virus at a rate of more than 1 million new cases a week.

Yet, during that same year, miracles occurred. Vaccines were created, tested and mass-produced by Pfizer and Moderna that could, with 95% effectiveness, stop this virus cold.

If Americans can reach "herd immunity"—from having caught and survived the virus or having been vaccinated against it—the COVID-19 pandemic might be contained by the summer of 2021.

Yet, in the same year, the Dow Jones Industrial Average broke every record, crossing the 30,000 mark, again and again, with the NASDAQ and S&P 500 reaching new highs.

Thus, as tens of millions of Americans saw their savings wiped out and had trouble making rent payments and feeding their families, some investors saw their stock portfolios surge. Yes, Virginia, there are two Americas.

On Memorial Day weekend, a white police officer in Minneapolis was taped kneeling for nine minutes on the neck of a Black suspect.

Hours later, George Floyd would die, and his death would trigger protests against police brutality that quickly degenerated into radical and racial rioting unseen since the 1960s.

The arson, looting and attacks on police caused a backlash that spread across the country when the demands of antifa and Black Lives Matter suddenly became, "Defund the Police!" That anti-cop slogan did for law enforcement reform what rioters' cries of "Burn, baby, burn!" did for the civil rights movement in the '60s.

By the time the fires burned out, Middle America was recoiling against the left for indulging the anarchists and denouncing Democratic leaders who refused to condemn the rioting.

Still, despite the pandemic, the third of a million dead, the crash and the seemingly endless riots, President Donald Trump won 74 million votes, the largest total of any president in history. And he held the Senate for the Republicans and added more than a dozen seats in the House.

Yet, Joe Biden, who would be crushed in the Iowa caucuses and New Hampshire primary and lose Nevada to Bernie Sanders, would be rescued by a massive Black turnout in South Carolina. Revived, he would go on to win the Democratic nomination on the first ballot.

Sheltering in his basement through the fall, Biden would run up a 7 million-vote victory over Donald Trump, though his verbal and mental deterioration was almost painfully obvious in his few public appearances.

A large slice of America's academic and intellectual elite detests the men who created and built the country America has become. Not a positive omen for those who believe America has done great things, greater than any nation, and can do them again.

As America was shaken by its vulnerability to a pandemic, the U.S. saw its warships and warplanes challenged in the South and East China Seas and Taiwan Strait by a China, which, admonished to allow greater democracy in Hong Kong, proceeded to extinguish the existing democracy there. And the world and the West did nothing.

Revelations that China was running concentration camps in its interior to "reeducate" Muslim Uighurs in what it means to be a patriot in a nation dominated by Han Chinese and ruled by the Chinese Communist Party evoked only verbal protests.

By year's end, it was not America warning China but Beijing warning America that manifestations of political or military solidarity with Taiwan, and arms sales to the island, would constitute interference in the internal affairs of China—as Taiwan belongs to China.

Suddenly, a great awakening about the character of the regime we have pampered with investment and trade for three decades appeared stark.

Unable to stand up to a China in which they invested so many hopes, the American establishment turns to Russia—a nation with one-tenth China's population and one-tenth of its economy, and no army or navy to match Beijing's—as its adversary of choice.

But while President Vladimir Putin may fulfill well the role of villain, his principal foreign intervention in 2020 was to play the role of peacemaker in the South Caucasus' war between Azerbaijan and Armenia.