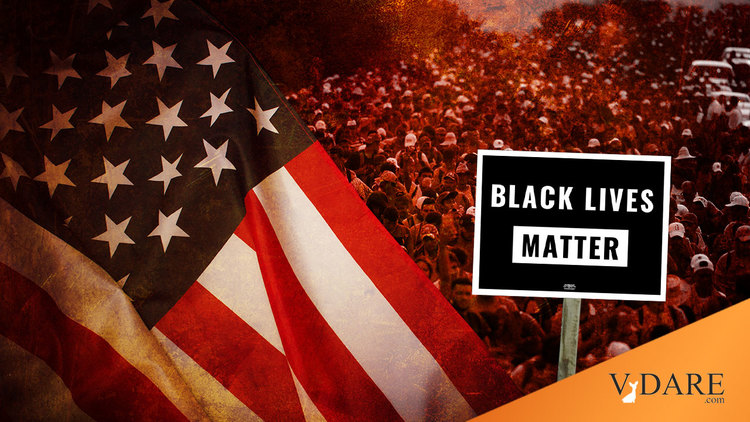 Earlier (2007) Robert Putnam: Diversity Is Our Destruction by Pat Buchanan and Diversity Is Strength! It's Also…Oh, Wait, Make That "Weakness" by Steve Sailer

After nine people were shot to death by a public transit worker, who then killed himself in San Jose, the latest mass murder in America, California Governor Gavin Newsom spoke for many on the eve of this Memorial Day weekend.

Good question. Indeed, it seems that the country is coming apart.

In May, Congress, to address a spate of criminal assaults on Asian Americans, enacted a new hate crimes law to protect them.

May also witnessed a rash of assaults on Jewish Americans to show the attackers' hatred of Israel and support for the Palestinians in the Gaza war.

The terms "racist" and "racism" are now commonplace accusations in political discourse and a public square where whites are expected to ritually denounce the "white privilege" into which they were born.

In the year since the death of George Floyd and the rise of the Black Lives Matter "Defund the Police!" campaign, the shootings and killings of cops and citizens in our great cities have skyrocketed.

In March, and again in April, 167,000 immigrants were caught crossing our southern border illegally. The invaders are now coming not only from Central and South America but also from Africa, the Islamic world and the largest and most populous continent, Asia. And their destiny may be to replace us.

For as the endless invasion proceeds, native-born Americans have ceased to reproduce themselves. Not since the birth dearth of the Great Depression and WWII, when the Silent Generation was born, has the U.S. population experienced such a birth decline as today.

At the same time, a war of all against all in America seems to raise the question, to which recitation of the cliche—"Our diversity is our greatest strength"—no longer seems an adequate response:

Is there no limit to the racial, religious, ideological, political, cultural and ethnic diversity the nation can accommodate before it splinters into its component parts?

In professions of religious belief, atheists, agnostics and secularists have become our largest "congregation," followed by Catholics and Protestants, both of which are in numerical decline.

Diversity of faiths leads to irreconcilable, clashing opinions about morality on the most divisive social issues of our era: abortion, homosexuality, same-sex marriage, etc.

Racial diversity, too, is bringing back problems unseen since the 1960s.

Are we Americans still united in our love of country? Do we still take pride in what we have done for our own people and what America has done for the world in the 400 years since Jamestown?

Hardly. Part of the nation buys into the academic and intellectual elites' version of history, tracing America's birth as a nation to the arrival of the first slave ship in Virginia in 1619.

We not only disagree about our history; some actually hate our history.

That hate can be seen in the statues and monuments destroyed, not just of Confederate military heroes but of the European explorers who discovered America, the Founding Fathers who created the nation, and the leaders, from Thomas Jefferson to Andrew Jackson to Teddy Roosevelt, who built the America we became.

Yet, tens of millions from all over the world still see coming to America as the realization of a life's dream.

Some look at Western civilization as 500 years of colonialism, imperialism, genocide, slavery and segregation—practiced against people of color. This is the source of the West's wealth and power, it is said, and that wealth and power should be redistributed to the descendants of the victims of Western rapacity.

Meritocracy must yield to equity. Elite high schools, such as Thomas Jefferson in Virginia, Stuyvesant in New York and Lowell in San Francisco, must abandon their emphasis on grades, tests and exams to gain admissions and prove progress.

And these schools must be remade to mirror the racial and ethnic composition of the communities where they reside.

And a new cancel culture has taken root in America.

Former U.S. Senator Rick Santorum, a CNN commentator, was fired for suggesting that Native American institutions and culture played no significant role in the foundation and formation of the American Republic.

Impolitic though this rendition was, was it wholly false?

Something is seriously wrong with a country that professes to be great but whose elite cannot abide the mildest of heresies to its established truth.

Post
What Do Average Americans Think Is The Ratio Of The Black To White Murder Rates?