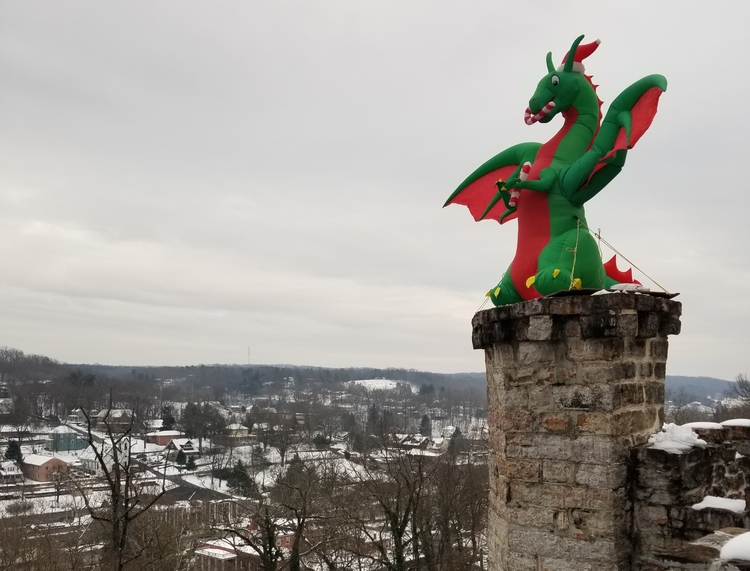 VDARE.com Editor Peter Brimelow writes: In recent years, I’ve illustrated our Christmas greetings to our readers with encouraging pictures of my citizen children posterity. But this year, I want to show that we are absolutely ready to defend immigration patriotism and the Historic American Nation from behind our castle walls in Berkeley Springs WV, with the aid of the dragon that has become a tradition here.

I want to thank our wonderful donors who have made this possible, and our wonderful readers. Together you are the hope of America, and the of West.

Lydia and I toast you in the video below (you can see a framed picture of Rosa Pelham Suit, the young bride for whom the castle was built in 1885), and I read out these kind words from the great Patrick J. Buchanan as our 20th anniversary year draws to a close:

Congratulations and Happy Anniversary to Editor Peter Brimelow, wife Lydia, and the staff at VDARE.com on the 20th birthday of the website that has worked so tirelessly and bravely to alert the country we love to the perils of uncontrolled mass migration.

All the best, Pat Buchanan

Merry Christmas to Pat and Shelley, and to the entire VDARE.com family. God bless you, every one.

2017 Merry Christmas From Peter, Lydia And The VDARE.com Family!

2016 Merry Christmas From Peter And Lydia And The VDARE.com Family! By Peter Brimelow

2011 VDARE.com Remembers Christmas Eves Past, Broods About The Future By Peter Brimelow

2009: Christians Against Christmas? By Tom Piatak

2006: Diversity Is Strength! It's Also…War Against Christmas By Tom Piatak

2005: Resistance Rampant, Whether National Review Likes It Or Not! By Tom Piatak

2003: From The Lawns Of Iowa To The Sands Of Iraq By James Fulford

2002: Christ, The “Other”, And Counterfeit Citizens By John Zmirak

2001: A Christmas Meditation: St. Augustine on the National Question By Chilton Williamson Jr.

1999: How the HUD Stole Christmas by Peter Brimelow