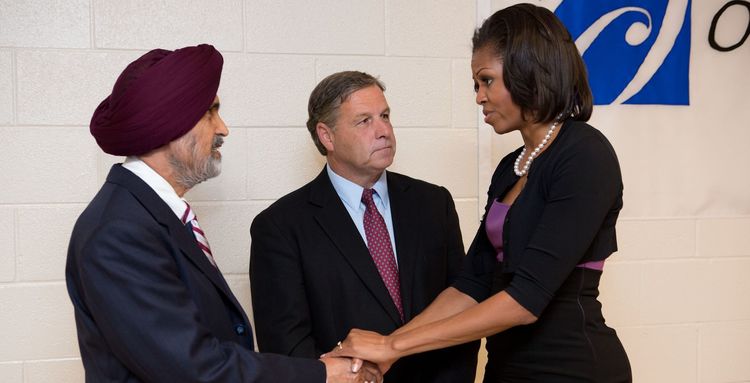 The Fulford File | Michelle Obama And Anti-Sikh Violence—Does She Realize She’s Actually Denouncing Her Own People?

Last month, when  an alleged white supremacist named Wade Michael Page murdered six people in a Sikh temple in Milwaukee, the Southern Poverty Law Center ($PLC to VDARE.com) had an “I told you so” moment—something it’s been looking for for a long time.

This has led to an outpouring rage from Attorney General Eric Holder. He called it an “act of terrorism” and a “hate crime“ and said that

“In the recent past, too many Sikhs have been targeted and victimized simply because of who they are, how they look and what they believe. That is wrong. It is unacceptable, and it will not be tolerated…”

Now we find that It has also led to a visit to the Sikh Temple by Michelle Obama.

Significantly, Michelle Obama did not visit Omar Thornton’s victims—Thornton was a black shooter in Connecticut who killed eight white men  for being “racist.”

But if Sikhs are being attacked, who exactly is doing it? Neo-Nazis are actually very rare.

Could it be that some of the people attacking Sikhs are those who Eric Holder calls “my people?” Could it be that they look more like what Barack Obama said that "If I had a son, he'd look like…”?

In short, could the chief danger to Sikhs be from people who look more like Trayvon Martin than Wade Michael Page?

A Today’s  Letter writer  recently reported the Milwaukee murder of Dalbir Singh, allegedly by Deangelo Williams, who had, at 16, already been convicted of armed robbery, but for some juvenile “justice” reason, not been sent to jail. I commented:

In the aftermath of the almost unheard of man-bites-dog hate crime committed by white racist Wade Michael Page, we heard that Congressmen had already been looking into crimes against Sikhs.

They were talking about exactly this—Sikhs are immigrant storekeepers and gas station owners. These occupations bring them into contact with lower-class blacks, whose xenophobia goes far, far, far beyond anything ever expressed by the VDARE.com editorial collective.

Dalbir Singh was a small grocery storekeeper in a black neighborhood. Pictured right is what the Google Street view van saw when they drove past. 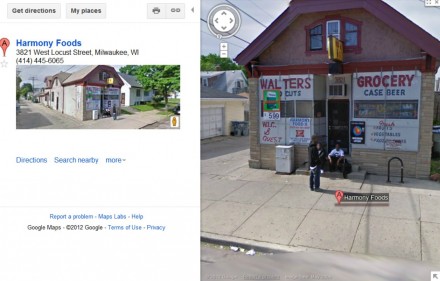 However, SALDEF has much less to do than MALDEF, Latino Justice PRLDEF, and the NAACPLDF:

Also, since the US doesn’t have a border with the Punjab, there are not a huge number of Sikh illegal immigrants.

Sikh activists tend to concentrate on issues around the right to wear the turban, and what they call “hate crimes.”

But hate crimes by whites against Sikhs are rare. After 9/11, there was (1) Sikh hate crime murder, by a white American who enraged by the murder of 3000 fellow Americans, and mistook Balbir Singh Sodhi for a Muslim.

The murderer, Frank Silva Roque, already had a felony record, and was sentenced to death. But in 2006, this was commuted to life without parole, because of Roque’s low IQ and mental illness. [9/11-tied slayer won't be executed, By Michael Kiefer and Jim Walsh, The Arizona Republic, Aug. 15, 2006 12:00 AM

SALDEF calls Sodhi a 9/11 Victim, and thinks his name should be on 9/11 memorials.

However, a much more typical crime against Sikhs was the murder of Sodhi’s brother, Sukhpal Singh Sodhi, a San Francisco cab driver. He

was murdered in the early hours of Sunday August 4, while driving home. Sukhpal Singh was the brother of Balbir Singh Sodhi, who was murdered in Arizona in the aftermath of 9/11.

Sikh Mediawatch and Resource Task Force (SMART), a national Sikh advocacy group, contacted the FBI and urged it to investigate the killing as a possible hate crime.

The crime remains unsolved. But, although it features in MSM propaganda pieces about anti-Sikh violence, it seems to have been a stray shot from a gang shooting—no white supremacists involved. No white people at all, in fact.

The two most recent pre-Wade Michael Page hate crimes were mentioned in many MSM accounts of the shooting at the Temple:

Last year, two elderly Sikhs were shot dead as they walked on a sidewalk in a suburb of California’s capital Sacramento, where just months earlier a Sikh taxi driver was beaten up by assailants who were yelling slurs.

The “taxi driver beaten up” story occurred in Sacramento, and the perps were two Hispanics, Johnny Morales Jr., 33, and Pedro Ramirez, 42, of Natomas, CA:

“The prosecution said Herbehjan Singh was savagely beaten because he wore a turban, which led the attackers to believe he was Muslim.”

The main assailant in that taxi beating case was sentenced to 13 years in jail, strictly on the theory (very debatable) that it was a hate crime.

SACRAMENTO, CA - A Sacramento man was sentenced to 13 years in prison for beating up a cab driver because he thought that he was Muslim.

Pedro Ramirez made a plea bargain with the prosecutor's office to get 13 years instead of life in prison, which was possible if he was convicted at trial.

Ramirez, his wife and another couple got a ride home from a Sacramento club last November— and got into a dispute over payment with the cab driver.

Ramirez' wife doesn't defend her husband's actions, but said he was not motivated by the victim's ethnicity or religion. Laura Sanchez said that's a lot of time for, what she believes, was a simple fistfight. [More]

Of course, the  Sacramento suburb shootings are much more serious—two elderly men shot down on the street in a drive-by shooting in Elk Grove, CA.

There is no description available of the assailants. The police have so far only been able to produce a composite picture of the truck they were driving.

And finally, they could be other Sikhs. Sikh internal Temple politics can get very ugly.

One of VDARE.com’s Indian correspondents pointed out that

There is no reason to believe that the Elk Grove OK? shooting was done by white people—except of course, that the authorities have a need to believe it.

Lists of anti-Sikh hate crimes, at SALDEF’s site, at a site called RealSikhism, and at something called LoonWatch, frequently include some really petty stuff. This often turns out to not be done by white people either.

For example, this one: Sikh Student Assaulted by Bully in High School in Queens, RealSikhism.com, Queens, New York, June 5, 2008.

This is more of school bullying thing, where one kid tried to pull off another kid’s turban, but it happened at Richmond Hill High School, which has 3179 students, 79 white. Odds that the turban puller was a white supremacist: 40-1 against.

The victim, 15 year old Sikh student, whose name is not being released in order to protect his identity, was allegedly approached by Umair Ahmed, who declared, “I have to cut your hair.” After the victim explained to his would-be assailant that cutting hair was against his religion, the latter showed signs of becoming violent, and threatened to punch the victim with a ring.

Singh said that Umair Ahmed showed him a ring with Arabic inscriptions and said: “This ring is Allah, if you don’t let me cut your hair I will punch you with this ring.”

You will note the complete absence of the “white supremacist” theme from that story.

Sikhs in America follow the middleman model minority path, which as I said above, brings them into contact with less model minorities.

Model minority or not, Sikh immigration will continue to be a problem for America, even if there is no violence at all, coming or going.

The Sikh taxi driver who was unlucky enough to be hit by a gang bullet in San Francisco was part of a family of 50 people, who are colonizing the United States:

Sukhpal Singh Sodhi was one of 50 members of an extended family who had left India in recent years, finding refuge in the United States and sending back a small fortune to make life better in their village in Punjab state.

While the windfall from abroad financed many improvements—paved streets, lighting, schools and even a public water system—it has come at a terrible cost: The violence and hate that the members of the Sikh family sought to escape in Punjab has found them here.

That costs the taxpayer a lot. And it costs Americans who would like to be working at low wage jobs in the US.

And the people who are coming from the Punjab looking to escape violence and hate need to be warned not about neo-Nazis, but about flash mobs, the game of “Knockout King” and the danger of minority violence.

But Michelle Obama, the MSM, and the SPLC aren’t going to warn them. Maybe they should start reading VDARE.com