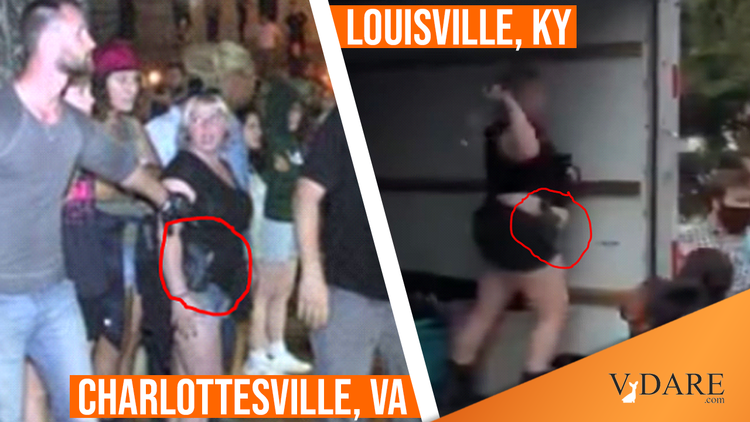 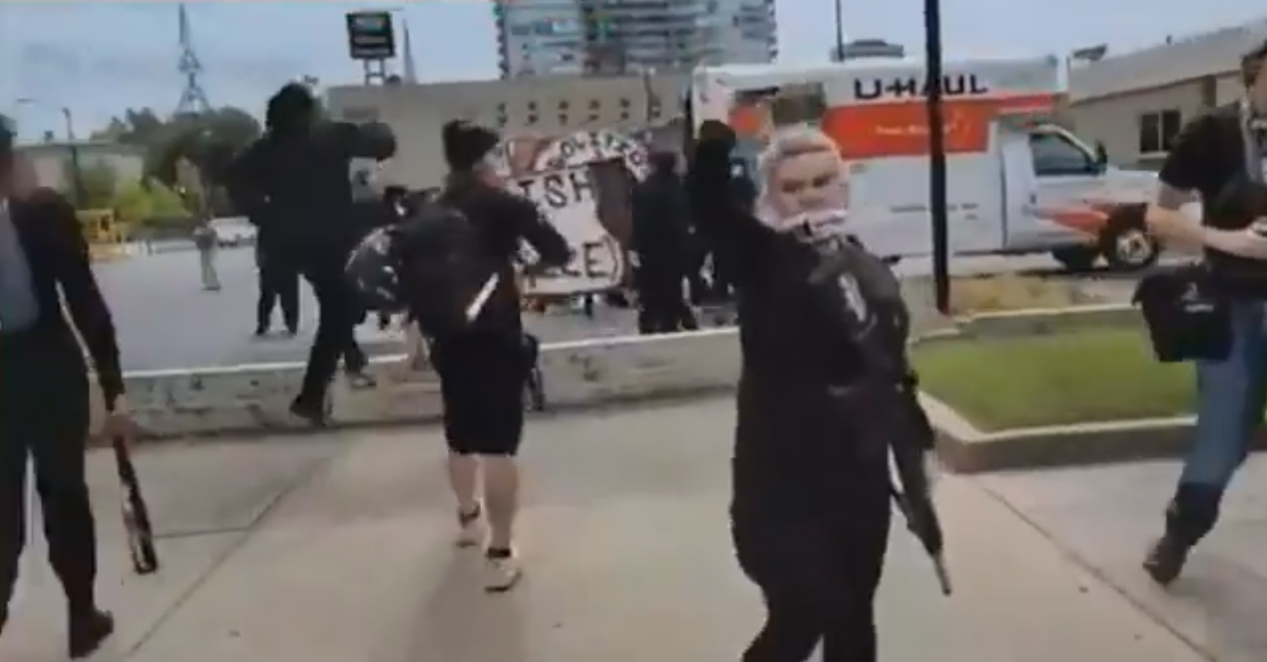 Antifa unloading a U-Haul full of riot supplies, including shields and weapons

Recently, I pointed out that the Antifa groups that attacked the 2017 Unite The Right rally in Charlottesville VA were also key to this summer’s BLM riots. Now arrests during the current Breonna Taylor riots in Louisville KY have proved my point: notably Sean Gerwing Liter and his girlfriend Holly McGlawn-Zoller—who was notoriously caught in a video clip unloading a U-Haul filled with riot supplies [U-Haul Seen Distributing Shields, Potential Weapons to Louisville Rioters Rented to Holly Zoller of Soros-Connected Louisville Bail Project, by Cassandra Fairbanks, Gateway Pundit, September 23, 2020]—were also caught on camera leading the charge in Charlottesville three years ago. Had our rulers done their duty, defended UTR’s civil rights and cracked down on these Communist vigilantes, America would now be a very different country.

Holly McGlawn-Zoller and Sean Gerwing Liter are both co-founders of Louisville Anti-Racist Action, an integral part of the Antifa Torch Network, explicitly known for being “militant” [Louisville Antifa: Inside Two Of The City’s Most Militant Activist Groups, by Danielle Grady, LEO Weekly, February 19, 2020]. 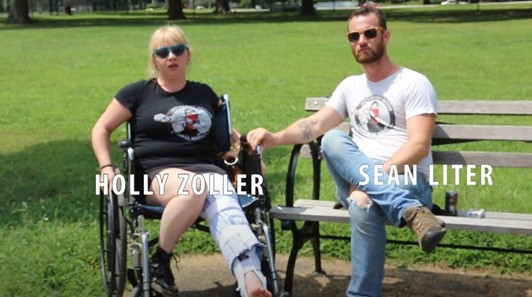 Therefore, it is no surprise that Zoller and Liter are involved in the Louisville riots that followed a grand jury indictment against a single police officer over the death of Breonna Taylor [Violence erupts in Louisville after only 1 cop indicted in Breonna Taylor case, by Noah Goldberg, Leonard Greene and Nancy Dillon, New York Daily News, September 3, 2020].

More of the Uhaul riot shield transport. May be more efficient than the Black Lives Matter Snack Van, higher capacity & fewer windows at risk of being smashed #Louisville #BlackLivesMatter pic.twitter.com/3RX8PNDy1b

Not sure if this video of the Uhaul of peace was posted.

Video footage shows that Zoller’s riot shields and barricades were used in violent brawls against law enforcement. At the 50 second mark in the video below, a riot shield is being thrown at the head of a Louisville police officer.

Liter was arrested on multiple charges stemming from the recent riots in Louisville. According to Jefferson County court records, he was arraigned on charges of obstructing a highway, disorderly conduct, unlawful assembly, and driving a vehicle with an obstructed windshield. 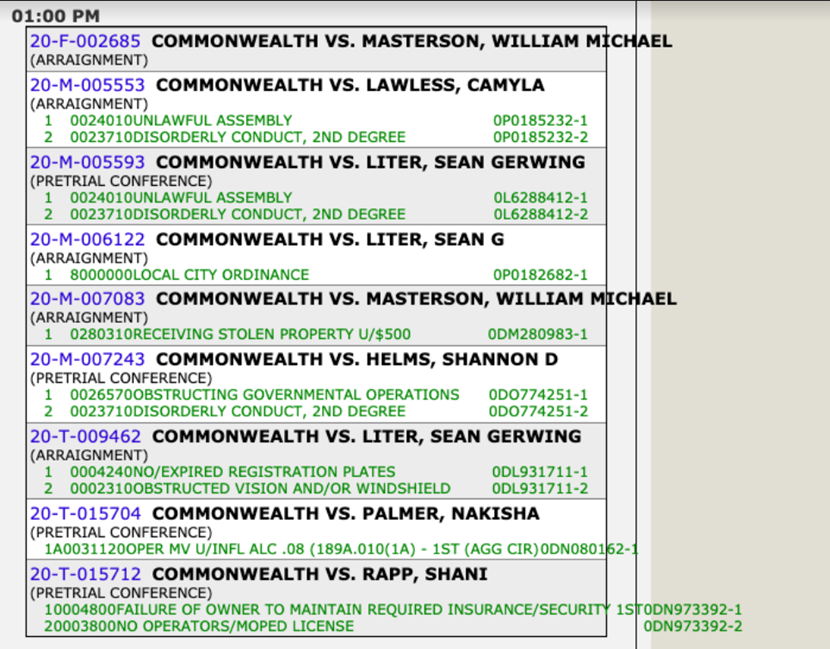 It is still unconfirmed whether the charges stem from activities with the U-Haul, although Zoller’s name was on the rental agreement. 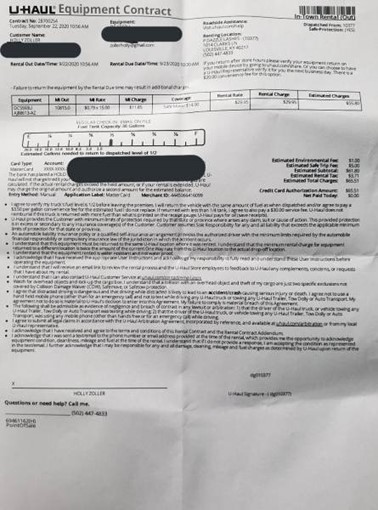 Zoller’s rental agreement was also conceded by a spokesperson for The Bail Project, the morally dubious Leftist nonprofit organization for which she works [Fact-checking disinformation about Louisville, a U-Haul and George Soros, by Daniel Funke, Politifact, September 24, 2020]. (Ignore Leftist spin, see below).

Allegedly leaked internal communications from within U-Haul claim that the U-Haul used during the Louisville riots was detained by law enforcement, although that has yet to be confirmed [EXCLUSIVE: Louisville Riot U-Haul Driver Arrested According to Leaked Internal Documents, by Cassandra Fairbanks, Gateway Pundit, September 27, 2020]. Additionally, according to Kentucky state records, the secondary contact for the vehicle, Keirreanna Munoz, was arrested for assaulting a police officer, disorderly conduct, obstructing a highway, and unlawful assembly. 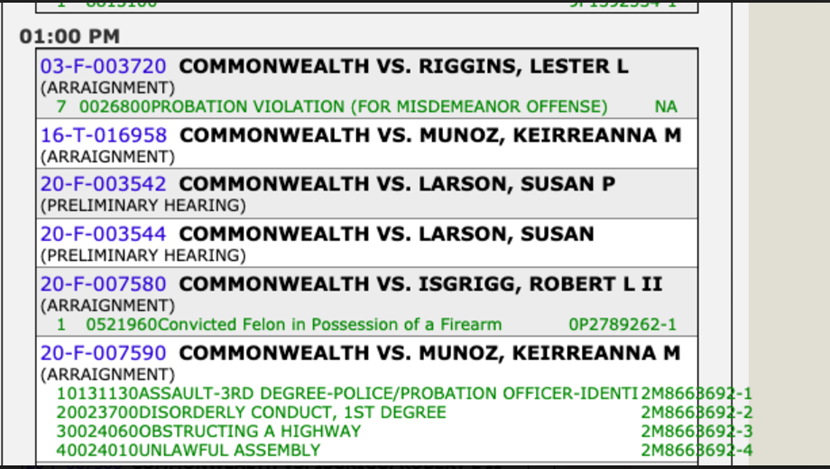 When asked about the arrests of Liter, Munoz, and Zoller, a representative for the Louisville Metropolitan Police Department told us that all three were arrested on either September 23 or September 24.

BREAKING: Louisville police have confirmed to us by email that Zoller has been charged with “Failure to Disperse and Riot in the Second Degree.”

Corey Lemley of Nashville Anti-Racist Action, another arm of the Antifa Torch Network, was also in attendance at the Charlottesville event, where he used an Antifa-themed baseball bat during a mob assault on a reporter. 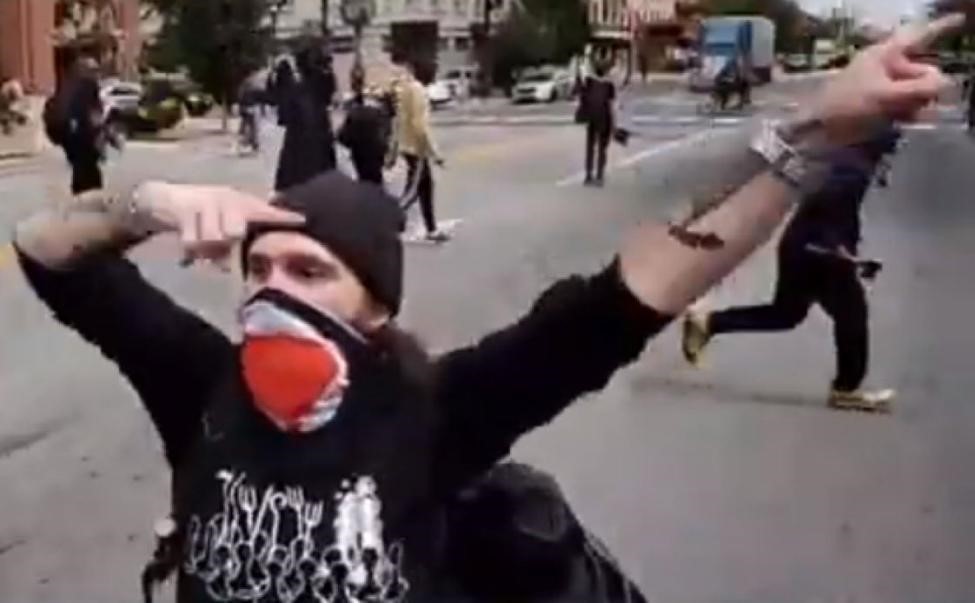 Liter and Zoller have a history of promoting violence. At the 2017 Charlottesville event, they brought weapons including mace and a handgun (despite it being against policy to carry firearms on the University of Virginia campus).

Zoller was wearing a similar handgun on her hip while handing out riot supplies from the U-Haul in Louisville: 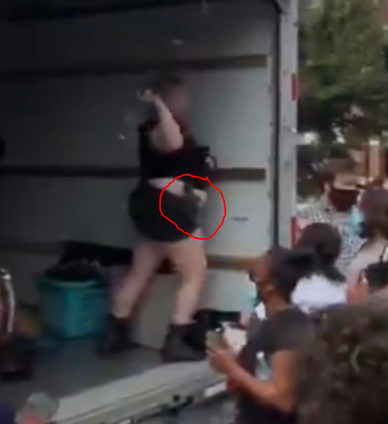 On August 12, 2017, in Charlottesville, Virginia, Zoller and Liter came downtown armed with weapons such as sticks and baseball bats as part of the premeditated plan to violently disrupt the Unite the Right rally. 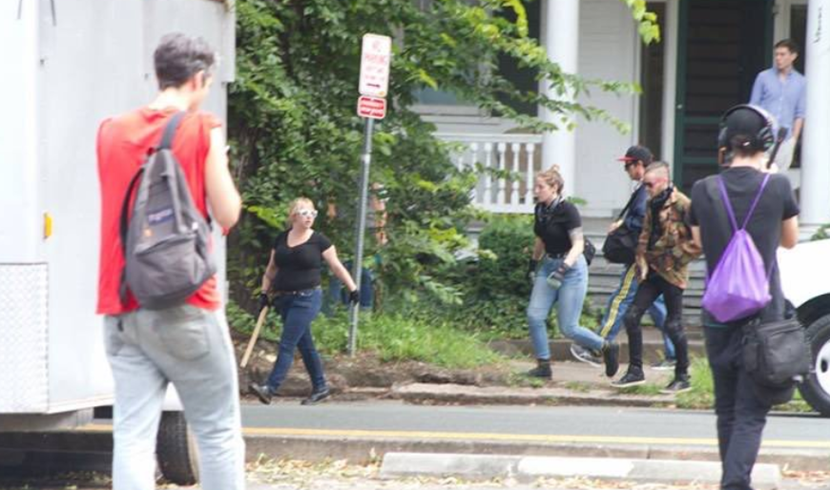 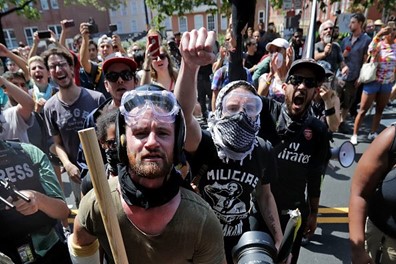 Liter (pictured at front with club) later used his weapons during attacks on demonstrators inside the permitted area.

He’s also The Bail Project’s board chairman. Other funders include Woke elitists like Richard Branson, Jack Dorsey, Danny Glover, Rihanna, and John Legend [The Rich People Who Rent U-Hauls For Riots In Louisville Where Cops Get Shot, by Charles Faddis, ANDmagazine, September 24, 2020].

According to CNN, The Bail Project has also been the recipient of up to $1 million dollars in federal subsidies during the COVID crisis. [CNN Politics] 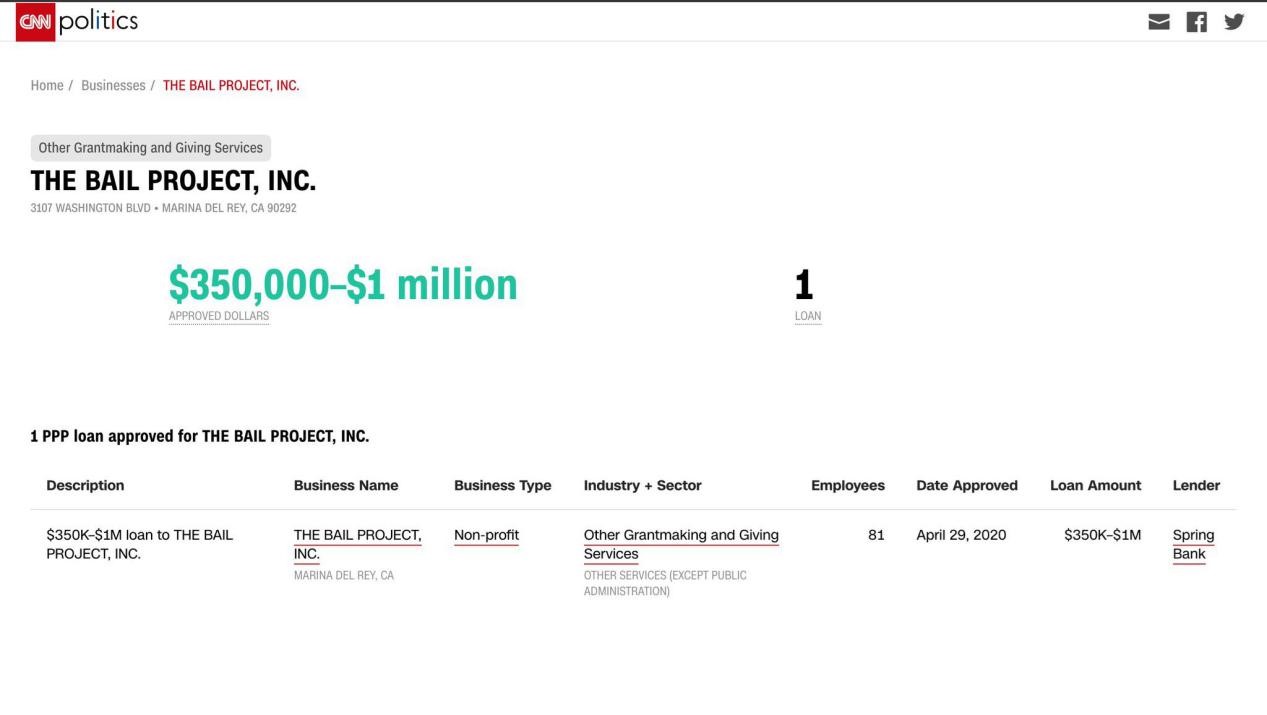 Rumors swirled around the internet that the Antifa and their U-Haul were funded by Leftist billionaire financier George Soros. Several news outlets including Washington Sentinel [U-Haul Seen Packed with Weapons Was Traced to George Soros Group, September 25, 2020] and BizPacReview [U-Haul that supplied riot gear to Louisville protesters reportedly rented by Soros-connected bail project, September 24, 2020] made claims to the effect the Bail Project was “partially funded by George Soros” because, according to BizPaC Review’s Samantha Chang, “Two members of the Bail Project are Soros Justice Fellows, an activist group funded by left-wing billionaire George Soros.”

The first person named as the Soros tie in the viral tweet cited in the two articles is Dolores Canales, who was a Soros fellow in 2014 for another criminal justice–related organization. Her biography on The Bail Project website explicitly mentions she was a former—but not a current--Soros fellow. The second person, Deborah LaBelle, is a Soros fellow but doesn’t work for The Bail Project. She simply shares a page on the Detroit Justice Center with a woman named Megan Dieboll, who does work at The Bail Project.

However, one of the primary organizations providing material support to Leftists protesters at Unite the Right is Refuse Fascism, co-founded by Black American Affirmative Action Princeling Cornel West and Carl Dix of the Revolutionary Communist Party.

Refuse Fascism is not its own nonprofit. It receives fiscal sponsorship from Alliance for Global Justice—which is indeed a Soros-funded group.

In Charlottesville on August 11, 2017, the evening before the UTR rally, West gave a violent speech to “counter-protest” groups (including Antifa) at St Paul’s Church in Charlottesville. He said, “We have to take a stand! That’s why some of us came to fight and get arrested if necessary.” [Emphasis added].

The next day, August 12, Refuse Fascism handed out supplies such as picket signs reading, “NO! In the name of humanity WE REFUSE TO ACCEPT A FASCIST AMERICA”.

Many individuals with the Antifa Torch Network marched with either Dix and his Revolutionary Communist Party or Cornel West and “Congregate Cville,” a group of Leftist clergy. 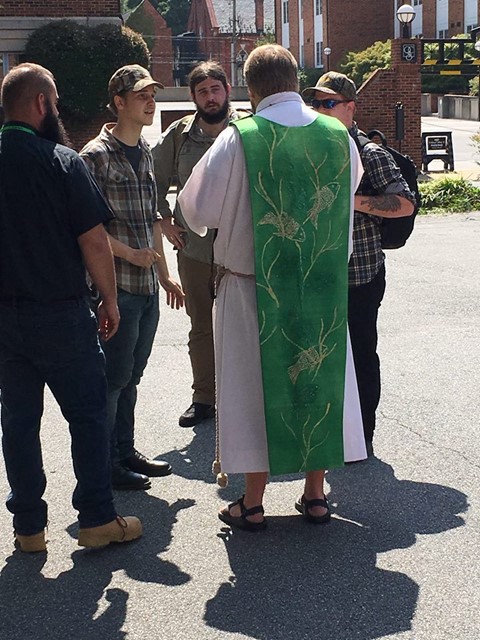 This exemplifies the Leftist concept of “Diversity of Tactics”—a mixture of violence and nonviolence. 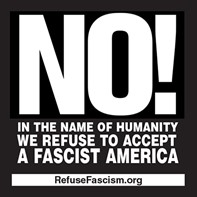 After organizing in the parking lots of the “Congregate Cville” churches, Refuse Fascism demonstrators blocked Market Street outside the permitted demonstration and beat demonstrators with the picket signs. 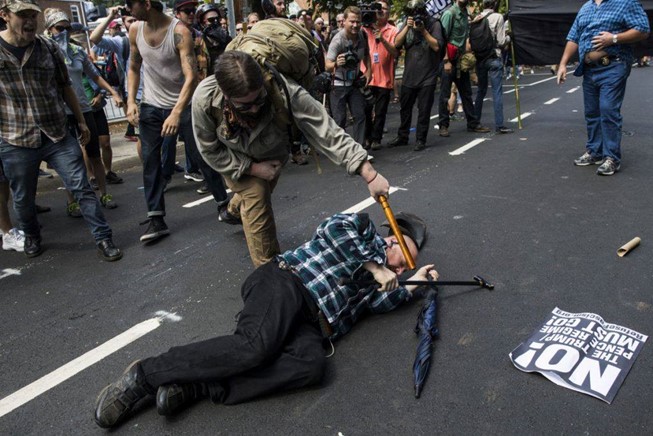 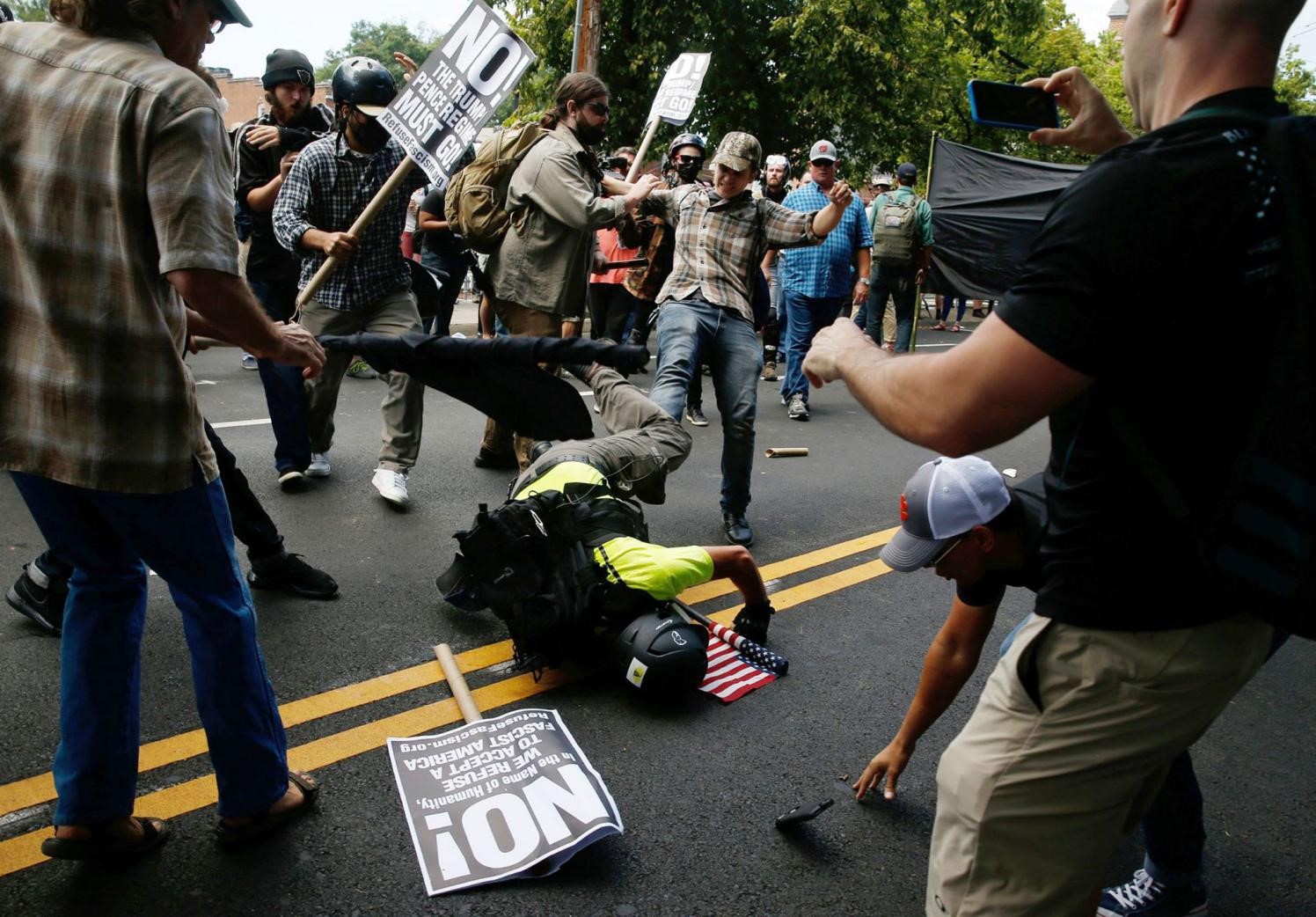 So this is the real Soros to Antifa pipeline:

The financing is generally never so simple as a billionaire directly paying for a U-Haul. It’s more like a series of fiscal contributions passed between shell corporations that ultimately end up as “picket signs” a.k.a. clubs and bail funds in the hands of violent rioters.

Far more direct, and far more sinister, is the funding of the campaigns of Leftist prosecutors who continue to release the rioters without any serious charges. Soros did just that during the 2018 midterms [Conspiracy FACT: Soros-funded prosecutors let rioters go but declare not agreeing with Black Lives Matter to be a ‘hate crime,’ by Nebojsa Malic, RT, July 9, 2020].

That’s also why we’ve seen the politically motivated prosecutions of conservatives like Jake Gardner and the McCloskeys who were forced to defend themselves against the Black Lives Matter mobs.

Americans face a violent interstate Communist conspiracy. Where is the FBI?

Jason Kessler [Email him |Tweet him] is a freelance journalist and activist who has written for VDARE.com, Daily Caller and GotNews as well as his own site JasonKessler.us. He’s also the president and founder of the America First non-profit Unity and Security for America.