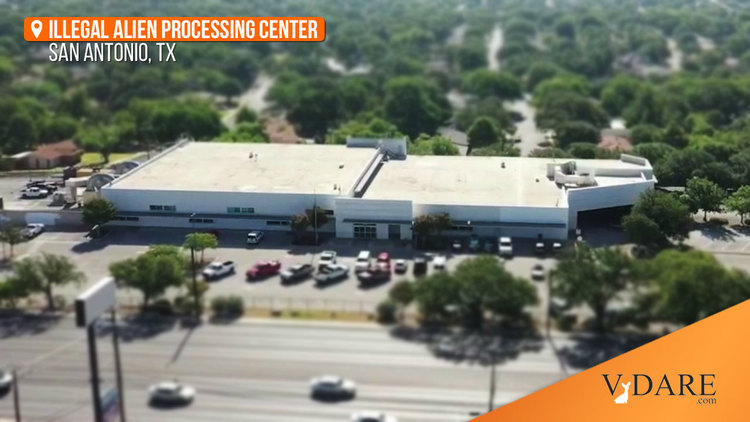 San Antonio has opened a welcome center for the illegal aliens whom Barton Cockey described in his report about the federally subsidized invasion of the once-great Texas city. It began operating last week “to the surprise of residents in the nearby Shearer Hills and Ridgeview neighborhood”[San Antonio opens Migrant Resource Center, surprising neighbors, by Garrett Brnger and  Joshua Saunders, KSAT.com, July 7, 2022]. No doubt they were surprised!

With hundreds of migrants arriving in San Antonio every day, bussed up from the border, the city opened a Migrant Resource Center on Thursday to the surprise of residents in the nearby Shearer Hills and Ridgeview neighborhoods. https://t.co/GYtiO4k3UR

Who would have thought, after all, that a president of the United States would aid and abet the invasion of his own country?

City officials say asylum-seeking migrants have been arriving from the border in droves after federal authorities process them. More than 198,000 migrants have passed through the city since April 2021. The city plans to use the new resource center in a former CPS Energy customer service building in the 7000 block of San Pedro Avenue as a one-stop shop to help them continue to their final destinations.

Of the 600 migrants who arrive daily in San Antonio, the city says 500 need a place to stay overnight. And while previously, many had been going straight to the airport, those who didn’t have immediate travel plans ended up milling around Travis Park downtown, where groups like the Interfaith Welcome Coalition tried to help them with food and shelter.

Now, the city says migrants will be able to get case management, access to rest areas, food, and rides to an overnight shelter or their continuing travel at the resource center.

Freelancer Ali Bradley provided more from an internal Homeland Security memorandum. It says the center will provide a “quicker connection to resources to expedite onward travel.”

That means a quicker connection to resources to expedite The Great Replacement.

“The city says the goal is to redirect the migrant drop-offs to the new site instead of at the Greyhound Bus Station and the San Antonio International Airport unless they have a departure within two hours,” she wrote:

However if they are in ICE facilities the city requests “ticketed migrants” are dropped off at the airport to continue their journey into the U.S.

TX: Migrant Reception Center run by the City of San Antonio set to start receiving migrants tomorrow morning to "provide quicker connection to resources to expedite onward travel" --According to an email leaked by DHS sources. The city has yet to respond. https://t.co/JoPIpbxFSB

Not that we need to say it, but this is treason.