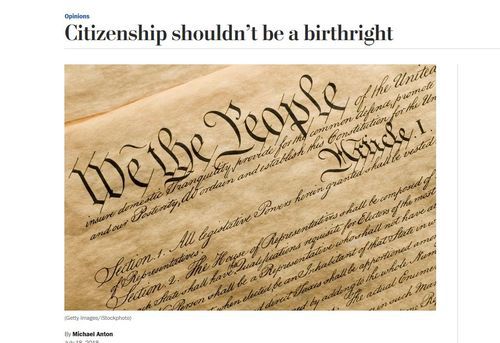 Donald Trump vowed to end Birthright Citizenship if he became president. With the collapse of the southern border, it is now vital that he act on this issue to prevent Americans from being voted out of their own country.

Mentions of the Birthright Citizenship topic from the administration have seemed to be accidental—suggesting the issue is indeed percolating below the surface  but has not yet reached the level of a concrete proposal.

This last month, then-Homeland Security Secretary Kirstjen Nielsen told Tucker Carlson that eliminating Birthright Citizenship is “on the table” for the Trump Administration. But, significantly, Nielsen’s answer only came as a result of Carlson’s asking her about it. [DHS Sec. Kirstjen Nielsen to Tucker Carlson: Getting Rid of Birthright Citizenship Is ‘on the Table’, by Justin Baragona, The Daily Beast, April 2, 2019].

And since then, we have heard nothing from the administration about Birthright Citizenship.

It's in the process. It'll happen ... with an executive order. It was always told to me that you needed a constitutional amendment. Guess what? You don't.

This caused the usual hysteria—Democrats recognize that any attack on Birthright Citizenship is a knife in the heart of their plot to Elect A New People. However, there has been no action on the idea since then. One source told VDARE.com that Trump’s was an off-the-cuff comment and there’s no draft or structure in place to issue an executive order on Birthright Citizenship.

But the AXIOS interview did show that Trump still gets why Birthright Citizenship should be eliminated:

It appears the only way to get Trump to remember this issue is through reporter questions.

Trump did campaign in the 2016 Republican primary on this policy goal. His first immigration policy paper included its elimination: “[Birthright Citizenship] remains the biggest magnet for illegal immigration. By a 2:1 margin, voters say it’s the wrong policy, including Harry Reid who said ‘no sane country’ would give automatic citizenship to the children of illegal immigrants,” the August 2015 paper read.

“I don't think they have American citizenship and if you speak to some very, very good lawyers—and I know some will disagree—but many of them agree with me and you're going to find they do not have American citizenship. We have to start a process where we take back our country. Our country is going to hell," Trump said the same month of those babies born to non-citizens on American soil. [Donald Trump: Birthright babies not citizens, by Jeremy Diamond, CNN, August 19, 2015]

However, mysteriously, this position was dropped from the platform by the time of the general election. The archived version of “https://www.donaldjtrump.com/positions/immigration-reform” from November 2016 has no mention of Birthright Citizenship. The URL, fittingly, now leads to a 404 page.

But, based on past form, just one Trump interview can change this.

Ironically, this is an issue where Trump actually has some support in the GOP Congressional caucus. There are GOP senators who are ready to back Trump in the elimination of Birthright Citizenship. South Carolina Sen. Lindsey Graham, an ardent mass immigration champion, has also long proposed legislation to change our citizenship laws and repeated this after Trump’s October 2018 interview: “Finally, a president willing to take on this absurd policy of Birthright Citizenship,” he said of his shared desire with Trump to reshape citizenship laws. [Graham to introduce legislation to end Birthright Citizenship, by Jordain Carney, The Hill, October 30, 2018]

And it is imperative that Trump do something on Birthright Citizenship before he does anything else on immigration. Our country unjustly awards citizenship to thousands of children birthed by illegal immigrants and other foreign nationals every year. It acts as magnet for immigrants (legal and illegal), heightens demographic transformation, offers hope for illegals to permanently stay here, mocks the very idea of citizenship, and undermines our sovereignty. It means that his Administration’s failure at the border—admittedly partly caused by Congressional inaction and Kritarch sabotage—will result in permanent damage to the American polity.

Additionally, Trump, in violation of his election promises, has reportedly been induces to offer more guest worker visas to foreign nationals. But this terrible policy could be ameliorated if these guest workers could not birth future voters in American elections.

Guest worker programs without Birthright Citizenship would hurt American workers only economically. These foreign nationals would only work in the country for a while, then head back to their home country without anything to draw them back. But Anchor Babies hurt Americans politically—they cancel out their votes and will ultimately dispossess them.

So Trump most likely must act on his own to begin the resolution of this catastrophe. Former Trump aide Michael Anton advised this option nearly a year ago:

An executive order could specify to federal agencies that the children of noncitizens are not citizens. Such an order would, of course, immediately be challenged in the courts. But officers in all three branches of government—the president no less than judges—take similar oaths to defend the Constitution. Why shouldn’t the president act to defend the clear meaning of the 14th Amendment?

Anton believes judges who accurately follow the Constitution and 14th Amendment will agree that Birthright Citizenship needs to go. 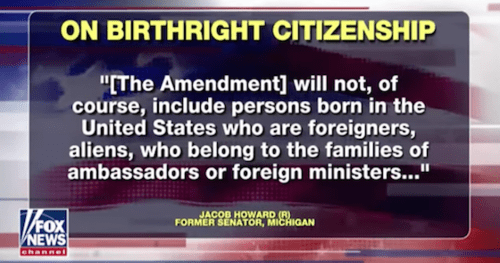 A just government in the modern world rests on the social compact, a freely entered agreement among free citizens. That compact’s scope and authority extend only to those who have consented to its terms and whose membership has been consented to by all other citizen-members. A compact that anyone can join regardless of the wishes of its existing members is not a compact.

[Citizenship shouldn’t be a birthright, by Michael Anton, The Washington Post, July 18, 2018]

Trump has shown he that will sign executive orders that make squishy Republicans sweat. His National Emergency Declaration to secure border wall funding is one such example. Congress could not give the Commander-In-Chief the money he needed to protect America, so he took Executive Action to do so. Needless to say, that action is being fought in the courts, but on past form the Supreme Court will probably rule in Trump’s favor.

Trump can do the same thing with Birthright Citizenship.

The main problem: getting this message to Trump.

One pending case may make Trump re-focus on Birthright Citizenship: ISIS bride Hoda Muthana is challenging the U.S. government’s claim she’s not a citizen. She was born here, but the government says her father was a foreign diplomat and the law excludes the children of diplomats from citizenship. [ISIS bride's attorney slams Trump for 'undermining Birthright Citizenship' by barring her from US, by Katelyn Caralle, Washington Examiner, February 21, 2019] Trump could easily void the case and others by getting rid of Birthright Citizenship.

Trump could also  be informed about how these illegal immigrants get a foot in the door if they have their baby here by Fox News and reporters who interview him. If he sees enough Fox News clips about it, it’s likely he will ask his staff to draft a proposal.

Is Trump up for the task? He has the potential—but something needs to trigger him.

Whether that will happen, God only knows.