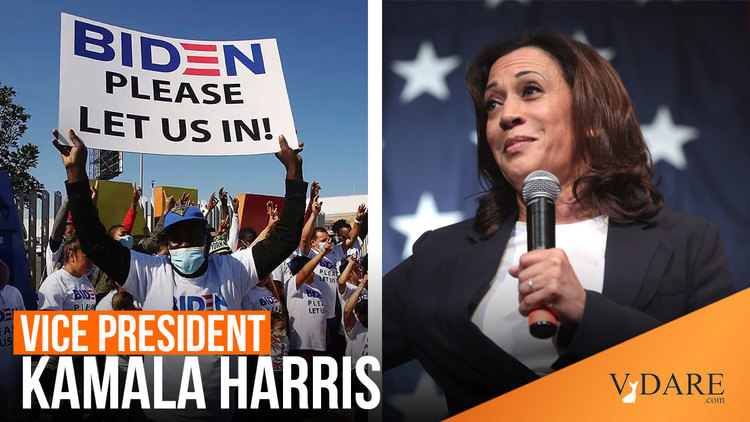 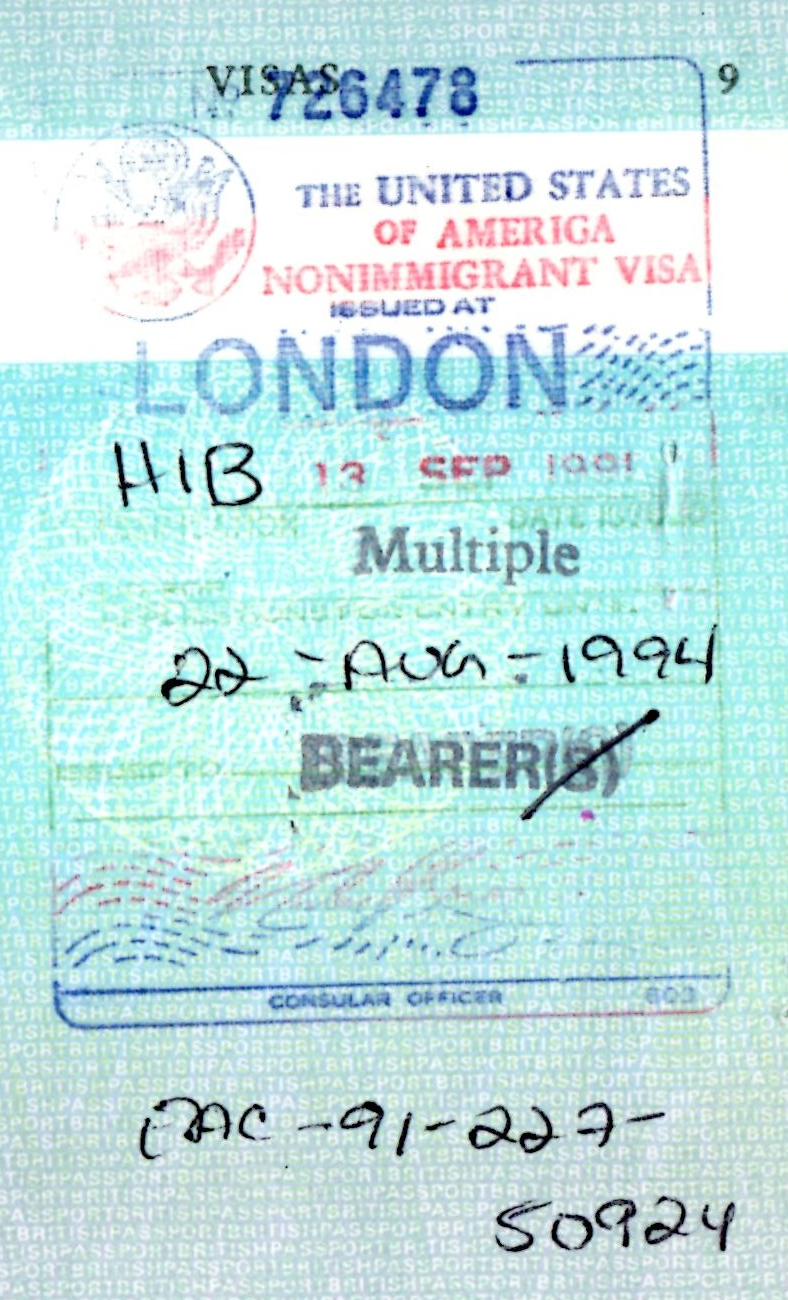 Wednesday last week was a milestone down the dark road we're traveling on immigration.

President Trump last year put freezes on both immigrant and nonimmigrant admissions where they would impact American workers.

Just to remind you, the word "immigrant," properly used, refers to people entering the U.S.A. for permanent settlement, with the right to apply for full citizenship after five years. "Nonimmigrant" is all other legal entrants: tourists, students, business exchanges, and guest workers like the H-1B. (Pictured right: my own H-1B visa from the 90s.)

Joe Biden killed the freeze on immigrants proper with one of his early executive actions, but the freeze on nonimmigrants like the H-1Bs was left in place. Just last December Trump had extended that to March 31st—this Wednesday. For the freeze to continue, Joe Biden would have had to extend it. He didn't, of course [Biden lets Trump era H-1B visa bans expire; Indian IT professionals to benefit, Economic Times (India), April 1, 2021]

This is a slap in the face to the 19 million Americans out of work and college students about to graduate into the job market. As Robert Law over at CIS says:

President Biden's decision to reopen the pipeline of cheap foreign labor is a win to his tech industry donors who value profits over fair market wages. This move will jeopardize the economic recovery and further diminish the ability for many qualified and willing American workers to secure decent jobs.

Meanwhile we have learned that Vice President Kamala Harris will not, after all, be heading down to the border to deal with the crisis there, as President Biden had told us. White House Press Secretary Jen Psaki says that there'd been a misunderstanding. The Vice President is only going to address the "root causes" of the invasion [Psaki says VP Harris isn’t in charge of border crisis, just ‘root causes’, by Steven Nelson and Emily Jacobs, New York Post, March 29, 2021].

How Leftists love those “root causes”! No need to bother with actual human beings engaged in actual illegality. There are reasons for what they are doing! And the reasons have root causes! Fix the root causes with a spot of social engineering, the reasons disappear and the people will be law-abiding.

What are these “root causes” for tens of thousands of people from s**-hole countries pouring in across our southern border?

My guess would be, that they can earn far more for a day's labor in the U.S.A. than they can back home, with free medical care and schooling for the kids, too. Plus, any new kids get Birthright Citizenship!

That's just my naivety talking, though. The true “root causes,” says the administration, are "violence, corruption, poverty and climate change" in the home countries.

Vice President Harris is going to fix all that, in all those home countries; which is to say, according to our Department of Homeland Security, not only the nations of Central and South America but also Ivory Coast, Sierra Leone, Senegal, Haiti, Pakistan, India, Bangladesh, Iran, Tunisia, Turkey, Nepal, Burkina Faso, Ghana, the Democratic Republic of the Congo, and no doubt others [PERSPECTIVE: ‘Extra-Continental’ Migrants Throughout Americas on Their Way Toward Southern Border, by Todd Bensman, Homeland Security Today, March 10, 2021]

That's quite a burden—a challenge—the Vice President has taken on there: violence, corruption, poverty and climate change all over the world.

Can she meet the challenge? Let's see.

There are, I should say, some faint glimmers of light in the immigration darkness. On April 1 we heard that Congressman Mo Brooks of Alabama has introduced a House bill to permanently reauthorize the E-Verify program and make its use mandatory [Congressman Mo Brooks Introduces Mandatory E-Verify Bill to Eliminate Illegal Alien Jobs Magnet, Brooks.house.gov,  April 1, 202]. That would of course make it much harder for illegal aliens to get work. I hope, although I haven't yet read the bill, it would include stiff penalties against employers who break the law.

Co-sponsors of the bill: Matt Gaetz and Bill Posey of Florida, Lance Gooden and Brian Babin of Texas, Scott DesJarlais of Tennessee, Scott Perry of Pennsylvania, Paul Gosar of Arizona, Jeff Duncan and Ralph Norman of South Carolina, Matt Rosendale of Montana, Jody Hice of Georgia, and Bob Good of Virginia. God bless them all!

There is of course not the slightest chance this bill will pass this House. I doubt it could even get a majority of GOP representatives, with the Chamber of Commerce breathing down their necks. In fact, come to think of it, given that the signatories all know the bill has no chance, I wouldn't rule out the possibility that some of them signed up in a spirit of cost-free virtue signaling to the GOP's nationalist base.

Whatever: God bless them, anyway.

And here's Senator Joe Manchin, Democrat of West Virginia, floating the idea of a moratorium on immigration.

Sen. Manchin proposes "a 90-day moratorium on all immigration until they can come up with a solution in Congress." Funny, Big Media doesn't seem to have noticed this #TotalImmigrationMoratoriumNowhttps://t.co/XpmICmtgx9

Don't get too excited, though; this is only a 90-day moratorium, and Manchin jumbled it all together with Gang of Eight-style talk about "immigration reform" and a "path to citizenship."

My impression here, as always when Joe Manchin turns up in the news, is that he's not too smart. Am I being unfair? Whatever again. I'll take what I can get, and be grateful.

Manchin looks like the only Democrat senator who might take a stand against the lunacies his 49 colleagues are planning. So I'll forgive him not having much of a clue on immigration.

Just having given the immigration moratorium idea a bit of airtime is worth a round of applause.