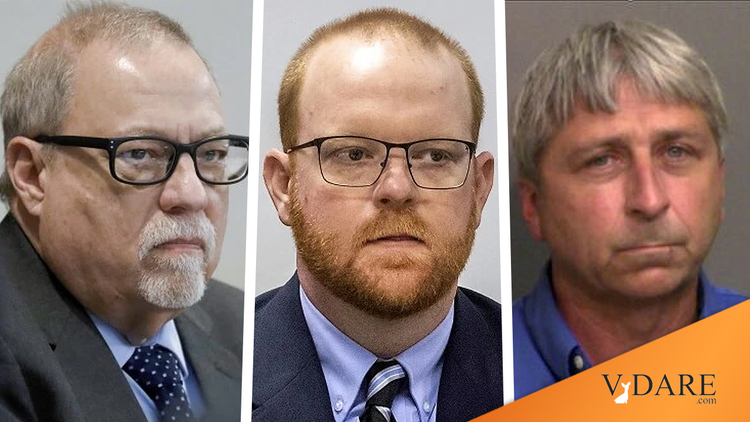 The most appalling anti-white horror of recent years has been the convictions of the Brunswick Three: Gregory McMichael, his son Travis, and their neighbor Roddie Bryan. These were the three white residents of Brunswick, Georgia who attempted a lawful citizens’ arrest on black lowlife Ahmaud Arbery. Arbery was shot dead trying to wrestle away Travis’ shotgun.

It was plain self-defense on Travis’ part; and neither Gregory McMichael nor Roddie Bryan shot anybody. As I noted when writing up the case last August, Gregory was trying to call the police and Roddie Bryan wasn’t even armed.

The anti-whites blew it up into a tale of leering rednecks hunting down an innocent black jogger. The white Establishment went into full cringe mode and, in the peculiar resurrection of double jeopardy that the Civil Rights Revolution has enabled,  the Brunswick Three got two (2!) life sentences apiece, one state and one federal.

Now they effectively have TWO life sentences apiece: one state, one federal. Like Aztec sacrifices to the Gods, the Brunswick Three, targeted by DOJ over the Arbery Case, have had their hearts ripped out and their bodies rolled off down the temple steps. https://t.co/FCpCSclytG

It was a monstrous miscarriage of justice, but no one of any importance took any notice. To the best of my knowledge Tucker Carlson has never mentioned the Brunswick Three; and as I noted following the state sentencings, Fox News TV host/comic Greg Gutfeld actually seems to have approved those sentences [’The Five’ compare trial of Kyle Rittenhouse and Ahmaud Arbery case in which jury found defendants guilty of murder, Fox News, November 24, 2021].

There was of course no justification at all for the federal trial and sentences after the state sentences had come down, other than to further appease the anti-white mob—the same mob that got Derek Chauvin.

"Black residents of Minneapolis are threatening to burn the place down if Chauvin isn’t convicted—and the only reason anyone thinks a jury could possibly return a guilty verdict is that they believe them." - @AnnCoulter https://t.co/JNdUSmabxD

Well, Greg McMichael’s wife Leigh has a website that includes an email address you can subscribe to for news about the fate of the Three. I’m just going to read you a recent update from that email list. This is Leigh McMichael writing on January 9th:

Greg, Travis and Roddy are still in Jackson Diagnostic Correction Prison in Jackson, Georgia. They have not been allowed out of their cells for their safety. They have a shower in their cells. They are in solitary in the Medical part of the prison.

Travis and Roddy are neighbors and can talk to one another. Greg is three cells down and has a hard time of hearing Travis, but they can communicate at times.

Travis amazes me with his grace and forgiveness. He has no hard feelings toward Roddy at all for telling that detrimental lie to the [Georgia Bureau of Investigation]. [Bryan, interviewed by investigators, had said that “Travis stood over Ahmaud and uttered a racial epithet”—something he couldn’t possibly have heard.] Travis states that although Travis would never stoop so low, Travis understood that Roddy knew what was coming and was trying to stay out of jail. I am still struggling to forgive.

Travis is doing fine. He still leans on his faith and reads the Bible quite a bit. They cannot have any books unless the Warden approves it, so they told me not to order any until they get to their permanent prison.

I still cannot visit. I have not seen Travis since the sentencing last August. I have not been face to face with him in almost 3 years. Travis still calls his son daily and I still see him once a month. He is doing fine.

Greg is still having health issues, but Jackson Prison and the Prison Physician have been quick to respond.

Both guys tell me that they cannot complain about the treatment they have received. The Guards are professional and not vindictive as the guards in the local jail were.

They were only supposed to be there a couple of months, but it has been five months now. They both expect to be moved pretty soon. I suspect the State is having a hard time finding them a safe place to go.

Please continue to pray for us. I appreciate the e-mails and prayers more than you will ever know. I will send out Greg’s and Travis’s address when they get to their final destination so that if you wish you can send words of encouragement. They love getting mail.

Thank you again. God knows the truth; I know the truth and I will never give up.

Again: That website is mcmichaeltrial.com. There you can find the email address and also the address of a GiveSendGo web page where you can subscribe to the Greg and Travis McMichael Defense Fund.

We, to coin a phrase, Shall Overcome.