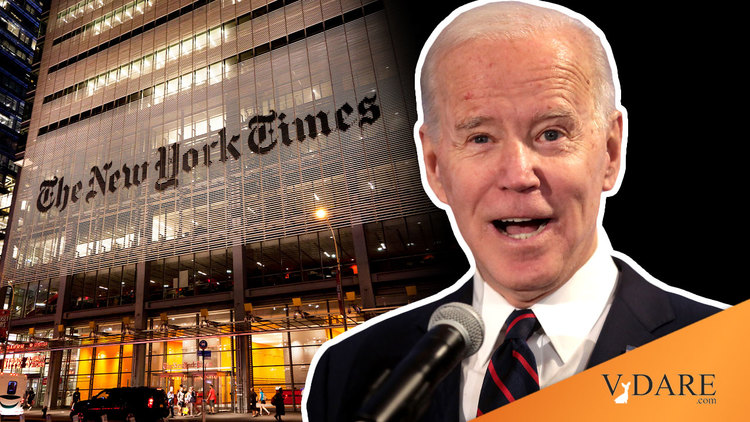 Earlier, by Steve Sailer: NYT: Biden Is NOT Too Old Now, But Next Term? and 21 Months earlier, by Neil Kumar: Joe Biden Has Left The Building: It Will Be A Kamala Administration On Day One

When President Joe Biden retired in Rehoboth Beach on Saturday night, he likely did not expect to find a severed horse’s head under his bed covers.

But there it was, courtesy of the New York Times.

“At 79, Biden is Testing the Boundaries of Age and the Presidency“ ran the headline over Sunday’s devastating front-page story.

Message: Time’s up, Joe. Time to go. Second term is out.

Biden officials and White House aides acknowledge, the story ran, that, “Mr. Biden looks older than just a few years ago ... His energy level ... is not what it was, and some aides quietly watch out for him. He often shuffles when he walks, and aides worry he will trip on a wire. He stumbles over words during public events, and they hold their breath to see if he makes it to the end without a gaffe.“

On and on it went, the Times tale of Biden’s cognitive decline:

“Mr. Biden’s ... speeches can be flat and listless. He sometimes loses his train of thought, has trouble summoning names or appears momentarily confused. More than once, he has promoted Vice President Kamala Harris, calling her ’President Harris.’ Mr. Biden, who overcame a childhood stutter, stumbles over words like ’kleptocracy.’ He has said Iranian when he meant Ukrainian and several times called Senator Mark Warner, Democrat of Virginia, ’John,’ confusing him with the late Republican senator of that name from Virginia ...

“The White House has had to walk back some of his ad-libbed comments, such as when he vowed a military response if China attacks Taiwan or declared that President Vladimir V. Putin ’cannot remain in power’ in Russia.“

It is not too much to infer from this stunning piece on the front page of the Times that America’s newspaper of record, a citadel of liberalism, has decided it is now fair game to confront Biden on the age-and-infirmities issue.

Nor is it too much to say that the Times is giving its own belated validation to claims made for many months by conservative media that Biden is neither physically nor cognitively capable of handling the duties of his office, let alone to serve a second term, which would end in 2029 with Biden at 86 years of age.

Yet, make no mistake.

With this article, the Times has provided cover for, and given sanction to, ambitious Biden rivals to take on the Democratic president in the way Sens. Gene McCarthy and Robert F. Kennedy took on Lyndon Johnson in 1968 and Ted Kennedy took on Jimmy Carter in 1980.

Not only did the Times’ decision to lend credibility in its Sunday edition to the charge that Biden has lost the capacity to serve as President, Monday’s lede story drove the message home:

A New York Times-Siena College poll of all Democrats had found that only 33% approve of the Biden presidency and 64% want a new nominee in 2024.

“The backlash against Mr. Biden and desire to move in a new direction were particularly acute among younger voters,“ said the Times. “In the survey, 94 percent of Democrats under the age of 30 said they would prefer a different presidential nominee.“

These twin stories, coming as they do, back-to-back in the Times and placed so prominently, are certain to have impact. Democrats will not miss the message that the Times is ready to bolt on Biden, and if Democrats wish to win and keep Donald Trump out of the White House, they need a new horse to ride. This one is lame.

Ironically, on the op-ed page of Sunday’s Times, columnist Frank Bruni seemed to be warning against a wide-open race for the nomination, which the Times news division seemed to be encouraging.

Biden’s age, dismal approval rating and seeming inability to inspire confidence in the party’s ranks have created an extraordinary situation in which there’s no ironclad belief that he’ll run for a second term, no universal agreement that he should and a growing roster of Democrats whose behavior can be read as preparation to challenge or step in for him. I’ve never seen anything quite like it.

Democrats can’t have their knives out the way they do now. Our president is already bleeding plenty.

Bottom line: The stories in Sunday’s and Monday’s Times detailing the physical and political disabilities of Biden suggest that establishment Democrats are of a mind to say to Joe:

Moreover, the longer Biden delays an announcement that he is not running again in 2024, the more he will appear to have been pushed out when he does make it, as he will.

Why? Because his competitors and rivals, not to let someone else steal a march on them, are going to begin behaving as what they are: contenders for Joe’s job, whether he runs or not.