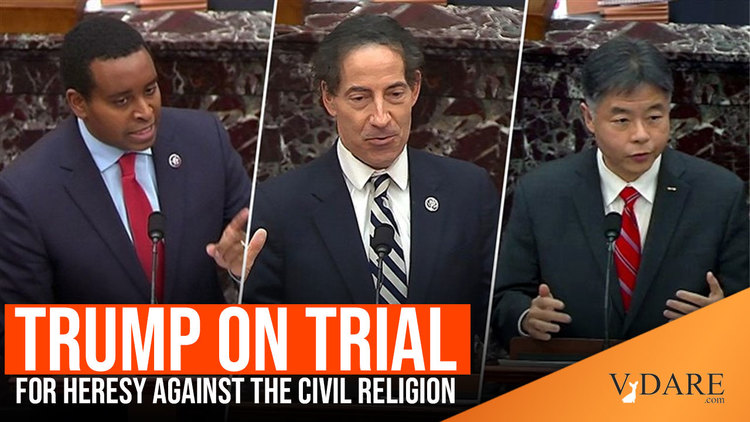 Earlier by Ann Coulter: Voter Fraud Never Happens! (Except in These 10,000 Cases)

We all know, deep down, that our “Republic” is not a really functioning democracy. This is probably why our leaders, far more so than leaders of genuinely democratic countries such as Switzerland or Norway, feel the need to constantly emphasize the importance, as Nancy Pelosi put it pompously in a January 10 press [Dear Colleague on Next Steps in Protecting Our Democracy ] release, of “protecting our Constitution and Democracy.” They do this to overcompensate for insecurities and doubts. It is part of our national Myth—our Civil Religion—that we are the ultimate democratic nation. This is the real reason why Donald Trump was impeached. He has committed heresy against the American Myth.

Myths, according to anthropologists, are fundamental in holding peoples together, in covering up contradictions, creating a united group and legitimizing those in power. Thus, questioning them—even if they are empirically false—is generally Not Done. Doing so is, perhaps only unconsciously, regarded as a heretical attempt to destroy the society and all those invested in the status quo.

This was best articulated—though you have to read between the lines—by NBC political correspondent Kelly O’Donnell [Tweet her] when she was interviewed on NBC News on the morning of February 11 O’Donnell explained that Trump’s political career has been marked by:

…saying things that others would fear to say and recoil at saying; talking about rigged elections . . . The idea of saying that something is rigged for most politicians would be a step too far. For Donald Trump, as a candidate and president, he was certainly willing to blow past those lines of normalcy and sort of discretion and the frequency of repeating it really created a bond with his supporters. [My transcription].

O’Donnell’s choice of words was absolutely fascinating. Presumably, it must be accepted that it is possible for elections to be rigged. There is clear evidence for this in Russian and Ukrainian elections [The Forensics of Election Fraud, by Mikhail Myagkov et al., 2010] and widespread fraud in British European Parliament elections has been reported and analyzed [Explaining electoral fraud in an advanced democracy, by Eleanor Hill et al., British Journal of Politics and International Relations, 2017].

But when it comes to America, even if there has been electoral fraud and even if an election has been rigged, O’Donnell thinks that “most politicians” will “recoil” from publicly asserting it. And they will do so because they are responsible adherents to America’s Civil Religion. They accept that, for the good of all of us in the ruling class, the myth that America is a democracy must be maintained, lest the “mobs”—of rednecks, hicks, and trailer trash—feel that they are not part of a “special nation” and so cannot be held in psychological bondage.

So, even if there has been a rigged election—or even if you genuinely believe that an election has been rigged—you should surely have enough “discretion” to not go public about it.

In much the same way, Medieval theologians would have detailed debates about the nature of God, whether transubstantiation was possible, and the truth, or otherwise, of parts of the Bible. But you didn’t go public about it. The Bible remained in Latin, untranslated, precisely so that the mob couldn’t understand it and, so, couldn’t start questioning the very basis of the “civil religion” of the time.

Medieval theologians had sufficient “discretion” to realize how disastrous it might be for the ruling class and for general order if they “went public.” This is why, when they increasingly started doing so, that same ruling class had them executed as heretics. (See Terry Jones et al., Who Murdered Chaucer?, 2004.)

Richard Nixon certainly suspected that the 1960 election—which John F. Kennedy won, it is easy to forget, by a mere  0.17 percent of the popular vote— was stolen from him by fraud in Chicago Mayor Richard Daley’s Illinois and Vice President Lyndon B. Johnson’s Texas. However, he didn’t rock the Ship of State by going public about it. (Indeed, he subsequently intervened with journalist Earl Mazo’s editors to stop the publication of a series of articles documenting that voter fraud had cost Nixon the election on the grounds that “our country can't afford the agony of a constitutional crisis—and I damn well will not be a party to creating one, just to become president or anything else").

Nixon had too much “discretion” to do anything like that. Nixon simply bided his time and won in 1968.

Some people might suggest that the same was true of Al Gore with regard to Florida in the 2000 election. Unlike Nixon, Gore did fight, but in the end he gracefully accepted the Supreme Court’s decision, though he surely believed—perhaps correctly—that it was unfair and that he was the rightful president.

It is certainly true that more people voted for Gore nationwide than voted for Bush. For many observers, the very fact that a presidential candidate can win the popular vote and lose the election is the essence of a system that it is not “democratic.” (Of course, this misunderstands the principle of federalism, but that’s a sophisticated concept.) On this basis, Hilary Clinton would have had a “democratic” right to contest the result of the 2016 presidential election. If she had lacked “discretion,” and had thus done so openly—rather than conspiring covertly with intelligence agencies to entrap Trump in an impeachable offense—we can only imagine how the MSM might have reported any resultant “insurrection,” likely from an Antifa and ethnic minority mob.

To give another example, up until the 1960s America was waxing lyrical about how “democratic” it was while the system in the Southern States prevented numerous people, who had the legal right to vote, from voting at all.

Ironically, of course, it is that fact that fraud occurs mostly in minority areas that now inhibits Republicans, who are terrified of being called “racist,” from defending themselves effectively.

Although Americans aren’t generally aware of it, international analyses have concluded that America is the one of the least democratic countries in the “democratic” category of countries. It is only just about possible to call it democratic at all. According to the Electoral Integrity Project’s analysis, the US came near the bottom of this second highest group for honest elections, tying with Mexico. This because a number of factors frowned on by international observers open it up to electoral fraud. These include: no voter ID, mail-in ballots, duplicate registration, election observers being prevented from observing, unreliable voting machines, the media calling results while some areas are still voting and so literally influencing the election, and voter fraud not being prosecuted often enough.

But of course voter fraud can’t be prosecuted. To admit that it happens would be to admit that a component of the American Civil Religion is nonsense [Electoral Integrity Worldwide, by Pippa Norris and Max Gromping, May 2019].

This is why Trump was on trial. He has committed heresy against the Civil Religion. Worse than that, this heresy has resulted in firing up a mob of working-class people in a country where another myth is that there is no class system and that everybody can attain the American Dream if they’d just work hard enough.

Trump was on trial for confronting the indoctrinated with the empirical truth, that American democracy is a sham, and thus causing America’s nobility to lose control of its serfs—and even, if only briefly, be in fear of them.