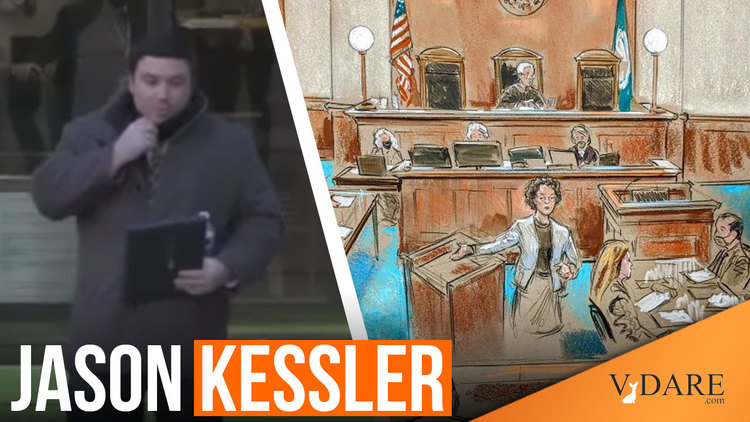 “HUGE FAIL” By Plaintiffs In Lawfare Against Charlottesville Unite The Right Organizers?

See, earlier: CHARLOTTESVILLE UNTOLD: Why Terry McAuliffe, Not Jason Kessler, Should Be On Trial

SINES V KESSLER (that’s me), the lawfare civil case alleging a “violent racist conspiracy” by organizers of the 2017 Unite The Right rally in Charlottesville, VA, ended with a decidedly mixed result. As the permit holder for the event, and the lead defendant, I’ll help break down exactly what it all means.

We apparently came within a hair of a mistrial being declared on everything except the claims against James Fields, driver of the car that drove into a crowd of Antifa blocking his way out of the city, resulting in one fatality. Jurors had deadlocked for three straight days of deliberations. What I’m told is that we probably had three jurors on our side who were refusing to find liability for the defendants. It should have been four but we lost juror 210—who testified that he suffered anti-white violence growing up in Hawaii—after someone at his son’s school contracted COVID.

According to one source, a really angry black female juror was the ringleader against UTR defendants, haranguing the other jurors until they agreed to overall liability on Count 3, and on count 4 for the few defendants involved, which they initially opposed.

Even though this compromise was apparently made to inflict some punishment on the defense, the ultimate judgment amounts were decidedly underwhelming.

In fact, Fox TV legal correspondent Seema Iyer, who attended the entire four-week trial, described the verdict as a “HUGE FAIL” for Integrity First, the organization financing the litigation. The video below is a MUST WATCH:

Brass tacks: the jury hung on the first two signature federal counts alleging the “violent racial conspiracy” (Count 1) and failure to prevent the alleged conspiracy (Count 2). Defendants were held liable on a nonconspiracy claim of violence and harassment under Virginia State law relating to the August 11 tiki torch parade (Count 4) and a non-racial conspiracy claim regarding August 12 also brought under Virginia law (Count 3). Counts 5 and 6 were claims against only James Fields.

The Corporate Media has almost unanimously touted the total $25 million judgment against defendants. But $12 million of that is against James Fields alone. Since Fields is already sentenced to life in prison plus 419 years, it is certain he will never have that money to fork over. While the insurance policy on his Dodge Challenger provided for his representation, the insurance company will not be on the hook for damages since the injuries were allegedly the result of an intentional act rather than an accident.

It has been widely noted that few of the other defendants are in a position to make payments on these judgments. For instance, the Daily Mail reports that defendant Matthew Heimbach was fired from his job at McDonald’s after someone recognized him during media coverage of the trial [Unite the Right rally's white nationalist leaders ruled liable for $26 million in damages - but it's unclear whether any of the defendants can pay court-ordered damages, by Brian Stieglitz and Adam Manno, Daily Mail, November 24, 2021]. This has left him without a means to support his two young sons, let alone satisfy a civil judgment.

As for the Count 3 (non-racial) state conspiracy claim, all defendants were held liable. Each of the nine plaintiffs was awarded either $1 or $0 in compensatory damages. Compensatory damages, as the name suggests, are intended to compensate the injured party for actual losses or injuries. A $1 or $0 imposition is basically the jury saying, “Yeah, we guess the defendants are liable but the actual injury they caused to the plaintiffs is negligible or nonexistent.”

This is an extremely fortunate result as it pertains to my federal civil rights lawsuit against the City of Charlottesville, which alleges First Amendment violations due to the police stand-down—aka Heckler's Veto. (This parallels issues raised by VDARE.com in its suit against the City of Colorado Springs.) There was concern that losing the Sines trial could make holding Charlottesville accountable improbable because it shifted blame onto the organizers. Yet even though we technically took the collar on the nonracial conspiracy (i.e., fighting with Antifa), the gravity of this conduct was so minimal as to be valued at only a single dollar. So this likely doesn’t preclude us from pursuing our offensive litigation.

Additionally, every individual defendant was hit with $500,000 in punitive damages and each participating organization was dinged for $1 million. It sounds like a lot at first, but keep in mind that Integrity First, the nonprofit behind the lawsuit, was hoping for eye-popping multimillion dollar judgments to “bankrupt and dismantle” defendant groups.

Suing those responsible for hate crimes has the potential to bankrupt and dismantle the groups at the center of this violent movement.

There are also reasons to believe that those numbers may come way down, possibly to negligible amounts. For instance, under VA Code § 8.01-38.1 punitive damages are generally capped at a maximum of $350,000, so those punitive damages should automatically come down by $150,000 for each individual and $650,000 for each group on Count 3.

In all but the rare case, a ratio of no more than 9:1 should define the outer limits by which punitive damages may exceed compensatory damages.”

That leaves a handful of Defendants on the hook for Count 4, which is a nonconspiracy tort dealing with “racial, religious, or ethnic harassment, violence or vandalism” (VA Code § 8.01-42.1). Only Christopher Cantwell, Elliott Kline, Richard Spencer, Robert “Azzmador” Ray and myself were sued under this statute. Here there were $250,000 in compensatory damages awarded to Natalie Romero and Devin Willis. This, despite the fact that Willis told reporters that he was not hurt during the protest [Students who confronted torch-bearers demand UVa take action, by Michael Bragg, Daily Progress, August 19, 2017].

In my case, although plaintiffs showed images of Christopher Cantwell and Robert Ray deploying pepper spray during the event, which at least theoretically could have oversprayed onto plaintiffs, neither testified they observed me doing anything, much less harassing them or violently attacking them because of their race. Since this was not a conspiracy allegation, I clearly should not have been held liable for the alleged conduct of others.

Considering the lack of any evidentiary basis to the judgment, we expect that there will be strong grounds to have this overturned on appeal. The bottom line: damages will be litigated further.

The irony of the supposed $25 million verdict against dozens of judgment-proof defendants: it was also approximately $25 million that Integrity First ultimately raised to finance their bloated lawfare campaign. If the purpose of the litigation was to compensate those injured by James Fields, they very well could have just given that money directly to their clients. (In fact, of course, they should have sued the city, which told the police to stand down and actually has the deep pockets to compensate them.) But, of course, Integrity First’s purpose was really stifling free expression and the persecution of political dissidents.

My conclusions for pro-white aka American political dissidents:

Finally, if by some stroke of misfortune some defendants are left with a judgment which they cannot afford to pay, there is always a silver lining in every rain cloud. Creditors can only harass you with a massive civil judgment once. After that, no other threat of civil judgment from anything ranging from defamation to copyright violation will ever have teeth again.

No more looking over your shoulder and carefully parsing your words. The gloves come off, for better or worse.

If you would like to support our appeals process and our offensive litigation, view donation options here or at GiveSendGo.com/utr.

FOOTNOTE: On Saturday, November 27 I participated in a panel discussion on Counter Currents Radio about the legal fallout of the Sines v Kessler case. The panel included attorneys Sam Dickson,  attorney Glen Allen and host Greg Johnson. I highly recommend checking it out here.

Jason Kessler (email him/Tweet him) is a journalist and civil rights activist with bylines in VDARE.com, Daily Caller, and GotNews as well as his own site JasonKessler.us. Follow him on Telegram, Gab, and Twitter.