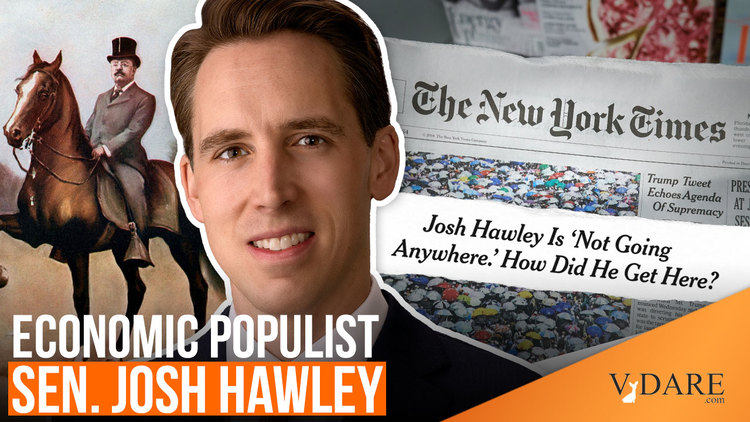 Is Josh Hawley The Compromise? Prospects For A (Teddy) Roosevelt-Type Right In America

It’s a good sign when the Regime Media have their knives out for one politician. It means they are afraid—in this case, of Missouri’s Senator Josh Hawley. Hawley was one of the few Republican senators who fought for President Trump following the disputed election. However, what’s far more important: Hawley’s sincere economic populism, including supporting immigration restriction to raise wages, and proposing direct federal support for workers. Corporate America is already rejecting the GOP/GAP. If only from sheer self-interest, Republicans must stop being the party that defends their profits. Hawley provides a way forward. An insight into his thinking: his 2015 biography Theodore Roosevelt: Preacher of Righteousness, which praises its subject as someone who “called the nation to live better” and rejected class struggles and economic systems as the keys to history. 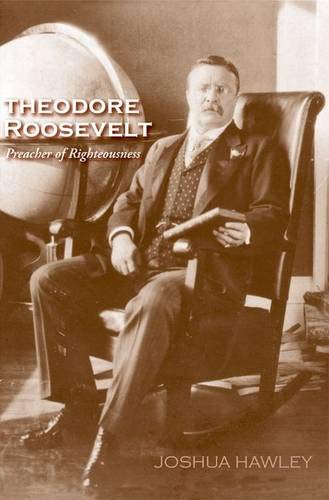 Hawley certainly has the right enemies. The increasingly ludicrous New York Times hunted down his prom date and his middle school teacher to badmouth him [The New York Times Is Having An Embarrassing Meltdown Over Josh Hawley’s Existence, by Mollie Hemingway, The Federalist, March 8, 2021]. Among those who trashed him was historian David Kennedy, who actually wrote the Foreword to Hawley’s book on TR [Josh Hawley Is ‘Not Going Anywhere,’ How Did He Get Here?, by Elaina Plott and Danny Hakim, March 8, 2021]. Kennedy complained that Hawley looked “angry” on television. Kennedy is an ostentatious moderate, but there are still many conservatives who share his view that they should spend another half century politely losing.

The faux-civility was especially amusing in the case of Jacobin, a magazine literally named after rampaging mobs who ransacked buildings with considerably more efficiency than confused Trump supporters. It hit Hawley for supporting the “storming of the Capitol”  [Republican elites are responsible for today’s storming of the Capitol, by Luke Savage, Jacobin, January 6, 2021]. And Left-libertarian Reason Magazine features Peter Suderman slamming Josh Hawley’s Toxic Populism [April 2021].

He worries that Hawley’s “authoritarian grandstanding” could be the “dark future” of the GOP. After obediently echoing the Left’s Narrative and bemoaning “conspiracists and reactionaries… dramatically halting business on both the House and Senate floors,” Suderman says:

And I’m not alone . Even after the media blasted Josh Hawley and major corporate donors cut him off, he was still able to raise more money than any other senator other than National Republican Senate Committee head Rick Scott [Hawley becomes GOP cash cow despite Jan. 6 blowback, by Lachlan Markay, Axios, March 7, 2021].

The biggest danger the GOP faces in the coming years: mere performative populism. For decades, GOP leaders like Dick Armey or Haley Barbour have used cowboy hats or down-home rhetoric to conceal the reality that their agenda is no different from the Chamber of Commerce.

Donald Trump started the transition away from this. But he didn’t complete it.

There were two problems.

The result was the worst possible outcome. He radicalized the Left, scared the moderates, and didn’t deliver much for his most dedicated supporters [The Tragedy of Trump, by Gregory Hood, American Renaissance, November 16, 2018].

Blacks got the Platinum Plan; Ashli Babbitt got shot in the neck. Trumpists wanted a Caesar; they got General Boulanger.

True, he had some notable successes. However, the fact that he “monitored” Big Tech right until he lost his own Twitter account shows he was a paper tiger. He was surrounded by foes and betrayers. But he was the one who kept hiring them.

We don’t fully know whether Senator Hawley has the steel for what’s required. However, the fact that he hasn’t backed down in the face of massive Ruling Class attacks is a good sign, especially when he isn’t apologizing for challenging the election results [CPAC Erupts in Delight After Hawley Brags About Trying to Overturn Election, by Peter Wade, Rolling Stone, February 26, 2021]. Indeed, here he’s going further here than I would.

However, Hawley voted against the most recent Democratic $1.9 trillion stimulus plan on the grounds that it was bailing out Blue States that didn’t actually need the revenue [Missouri’s Hawley, Blunt vote against Biden’s $1.9 trillion pandemic aid bill, by Austin Huguelet, Springfield News Leader, March 6, 2021]. This may be true, but it’s too subtle a message to get through hostile media. It would have been better if Senator Hawley had championed the $10,000 checks proposed by Representative Paul Gosar in place of the rest of the package [Republican calls for $10,000 stimulus checks to all Americans in last-minute amendment to Biden’s coronavirus package, by Sarah Grealish, The Sun, February 28, 2021].

Hawley also is breaking new ground with his plan for a “Blue Collar Bonus,” which would provide a direct subsidy from the government for those who make less than $16.50 an hour [Hawley discusses new proposal to raise national minimum wage, by Dylan Austin, WGEM, March 5, 2021]. This is progress towards what I think should be the right-wing orthodox position. I believe that Affordable Family Formation requires not just immigration patriotism, but also higher wages so one-income households can raise children [The Conservative Case for a $15 Minimum Wage, by Pedro Gonzalez, Newsweek, February 8, 2021].

This fits in with his patriotic message on immigration control, an issue he pressed during Attorney General Merrick Garland’s confirmation hearings. Hawley forced Garland to admit that, incredibly, he “didn’t know” if illegal immigration should even be a crime. Typically, few other Republicans seemed concerned with the issue.

This combination of immigration patriotism, trade populism, and economic progressivism is potent. And while it’s dangerous to read Hawley’s beliefs into a biography of a political figure from an earlier time, it’s striking that Hawley picked Teddy Roosevelt.

The social consequences of industrial work had to be addressed, and wherever possible, meliorated. This was partly a matter of national efficiency, but more importantly it was a matter of moral righteousness.

This doesn’t mean Hawley necessarily endorses this view of government, but it’s worth noting this same passage has TR supporting a national minimum wage “high enough to make morality possible,” in his words ["Social and Industrial Justice," August 1912].

Summarizing Theodore Roosevelt’s political and moral vision in the language of the time, Hawley says Roosevelt believed that

the race progressed by living up to its potential… what Roosevelt was trying to do was unite the nation in a common enterprise of social and moral uplift.

Roosevelt proposed an exercise in

“Racial destiny”? Although TR was in some respects a racial liberal—for example, he had the first black dinner guest at the White House, Booker T. Washington—Roosevelt, of course, was a species of white nationalist and saw the U.S. as the political expression of a white nation. Which was how all Americans, including the Founding Fathers, saw themselves until comparatively recently.

The book comments extensively (though disapprovingly) on Roosevelt’s racial and eugenic views, especially the president’s belief in the superiority of the Anglo-Saxons. As Hawley notes, “race” was used imprecisely in Roosevelt’s time, so this can be easily misinterpreted. “Race” sometimes referred to linguistic groups, so Roosevelt could refer to the “Spanish” and the “Portuguese” as distinct “races.” However, despite such impreciseness there’s no denying Roosevelt felt strongly about racial identity and read, thought, and said a great deal about it. He thought few groups were truly capable of self-government and considered Anglo-Americans at the vanguard of the project to civilize the world. Of course, as Hawley notes, there’s a contradiction here. Were Anglo-Americans supposed to use their supposed “superiority” to strengthen the rest of the world at their expense? Roosevelt seems to have not fully thought through the contradictions of ruling over other peoples, especially if it was supposedly for their own good.

Interestingly, Roosevelt believed American Anglo-Saxons had been improved by the experience of fighting for control over the American wilderness against what he saw as the primitive but proud and warlike American Indians. This partially explains why Roosevelt thought nations should actually seek out struggle. By the standards of his time, Roosevelt may have been more progressive than most on race because he thought races who didn’t find great challenges were doomed to moral and physical degeneration. They didn’t retain superiority simply because of genetics. In this sense, Roosevelt had positive views about “settlers” who conquered new lands as opposed to “immigrants” who showed up once the work was done.

Roosevelt believed that “Old Stock” Americans needed to be having more children and worried about preserving American identity. He saw state action as a way to protect that identity. He encouraged quasi-eugenic tax policies that would discourage the reproduction of the indolent rich, the poor, and recently arrived immigrants, benefitting only the sound and moral middle class. However, despite the extensive passages the book has about Teddy Roosevelt’s views on race, class, the need for assimilation, and even Roosevelt’s support for what can only be called state-directed eugenics, there’s surprisingly little material on immigration policy as such. Roosevelt may have said less about immigration policy than the grander prospects for racial improvement because of a crude but accurate logic. A people that allows itself to be not only outbred but replaced in its own homeland by foreigners is already dead. Questions about “strengthening” or “improving” it are beside the point. Certainly, the Bull Moose could not have imagined England and America having allowed themselves to be destroyed via replacement migration.

Ultimately (and unsurprisingly given contemporary pieties) Hawley rejects Roosevelt’s “repulsive racialism, his statism, and his obsession with power.” But he praises TR for understanding that the state does shape the character of a people and that “liberty is fundamentally a social undertaking.”  Politics, he suggests, should involve the pursuit of a higher good.

In an age when “private corporations” like banks, tech companies, and media outlets have more power than the state, this is something the Right needs to understand—unless we want to just keep dedicating ourselves to tax cuts to George Soros and Jeff Bezos.

The American Right can no longer retreat from power like William F. Buckley–style conservatives after the Cold War. We can’t even afford the merely symbolic showmanship of a President Trump, however entertaining.

Instead, if the American Right is to reverse and redirect the suicidal course we are on, we need a movement that openly declares its willingness to win, wield, and maintain state power.

Furthermore, we should understand that the distinction between “public” and “private” institutions is essentially false. As Paul Gottfried has suggested, “The state, economy, and society all act more or less in harmony and reflect shared principles and ideas of administration.” The question is not whether we can restrain power. The only questions are who will wield it and for what ends.

Senator Hawley undoubtedly wouldn’t put things so starkly. However, he’s moving the GOP in the direction of a Teddy Roosevelt or even a conservative nationalist like Otto von Bismarck, father of the German welfare state That’s the kind of Right that is needed if America is to be saved.

We will either have a strong state that energetically defends the interests of the Historic American Nation or another few decades of just babbling about tax cuts while borders, morality, living standards and the polity itself collapse.

Senator Hawley is a moderate. Despite the Regime Media’s ululations, his main flaw is that he doesn’t go far enough. He’s the compromise candidate for 2024. He’s the minimum the Generic American Party’s base should be willing to accept.